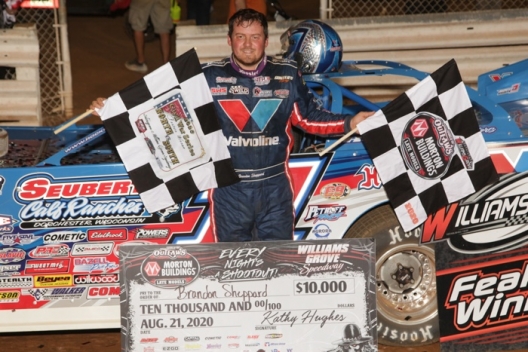 MECHANICSBURG, Pa. (Aug. 21) — Brandon Sheppard is making himself at home in the Keystone State.

And at least four drivers hailing from Pennsylvania would certainly agree.

Sheppard, 27, of New Berlin, Ill., scored a flag-to-flag victory in Friday night’s 40-lap World of Outlaws Morton Buildings Late Model Series feature at Williams Grove Speedway, giving him a sweep of the national tour’s two-race swing through central Pennsylvania. He repeated his virtually flawless performance of the previous evening when he led all the way to register a 50-lap WoO win at Abbottstown’s Lincoln Speedway.

Most notably, Sheppard’s $10,000 triumph at the historic Williams Grove half-mile came over a quartet of Pennsylvania residents: Indiana’s Gregg Satterlee finished 0.787 of a second behind the victor in the runner-up spot; York’s Rick Eckert advanced from 13th to place third; Chalk Hill’s Mason Zeigler started and finished fourth; and veteran local racer Gene Knaub of Dover recorded a career-best WoO finish of fifth.

“Everything’s just been going so good,” said Sheppard, whose back-to-back WoO wins in the Rocket Chassis house car came on the heels of his four victories in six DIRT Summer Nationals starts from Aug. 11-16 with his family-owned No. b5. “Everyone’s clicking good together and working good together like always. Everybody’s confidence is high right now, not only mine.

“We’re doing our job early in the night qualifying good and winning our heat, and that’s putting us in position to reel off some wins here.”

Sheppard, who won last year’s WoO event at Williams Grove, was on the mark again in his return engagement. He roared off the outside pole — the second straight night that he started second — to grab the lead from polesitter Cade Dillard of Robeline, La., and never looked back.

But Sheppard didn’t run away and hide from the rest of the pack. Much like his march to victory at Lincoln, he had to constantly adjust his route around the paper clip-shaped track to keep his pursuers at bay.

Dillard proved especially hard for Sheppard to shake. The 29-year-old sophomore WoO regular stayed within striking distance of Sheppard for more than half the distance, sometimes tossing his MB Customs car hard through the corners on the cushion and other times ducking low in an attempt to find a groove that could carry him past the reigning WoO champion and runaway points leader.

“I knew he probably right there,” Sheppard said of Dillard. “He’s a hustler and he’s been really good this year, so I figured he was probably right there with us. We just hung in there, stayed patient, and when the line moved around we were able to move around and I didn’t have my tires burned off or anything.”

Dillard’s hopes for a third WoO win in 2020 effectively evaporated on lap 31 when he slipped high through turns one and two and watched Satterlee and Eckert slide by to drop him to fourth. One circuit later Dillard’s car sustained nosepiece damage in a scrape with Zeigler between turns three and four, leaving him handling problems that caused him to fall all the way to 12th in the final finishing order.

Following the race’s fifth and final caution flag on lap 34, Sheppard maintained command by a short margin over Satterlee and Eckert, the pair who spent the closing circuits embroiled in a tight battle for the runner-up spot.

“I just try to stay as calm as I can, hit my marks and run the best, smoothest lines that I can,” Sheppard said, summing up his strategy to close out his series-leading 13th victory of 2020 and his 26th overall win of the season.

According to Sheppard, his Lincoln and Williams Grove triumphs bore many of the same characteristics.

“Lincoln and here, they kind of raced pretty similar,” said Sheppard, who registered his 68th career WoO victory. “Same kind of surface, and the lines that we ran tonight compared to last night were pretty similar.

“I knew the line was gonna move off the top for me, but I just didn’t know when it was gonna happen. I felt it slowing down and slowing down, and my crew guy told me to get down there (to the bottom) so that’s when I did that.

“The line moved around tonight, and that says a lot about a guy’s racetrack,” he added. “They did a really good on this racetrack tonight. They worked on it all night long and made us be able to race all over it.”

Satterlee, 36, rebounded from a disappointing 18th-place finish at Lincoln to tally a bridesmaid finish that was his best on the WoO tour since an August 2014 victory at Delaware International Speedway in Delmar. He needed just 10 laps to move his XR1 Rocket from the ninth starting spot to third and hung strong to second after assuming the position on lap 31 when Dillard fell back.

“We didn’t change our car to compensate for (the WoO rear deck height “droop” rule) last night, so we really tried to figure out what it was doing to our car and fix it,” Satterlee said. “Obviously, I think we did, because our car was really good.

“Was I better than Brandon? No. Was I as good as Brandon? Probably pretty close. So that to me says our car was pretty good.”

Satterlee didn’t throw caution to the wind in hopes of challenging Sheppard following the final restart.

“I was really comfortable doing what I was doing,” he said. “I wanted to try and move around, but I wasn’t as comfortable as I wanted to be to really get aggressive and try to move wider and make more time on him.

“But I got to second mostly running around that bottom, and I knew Eckert had come way up through there and he was probably doing the same thing … so I was gonna take what I had and ride it out. If Brandon kept running that top I might have been able to sneak in there, but obviously he had his signal guy telling him to move down and protect the bottom.

Eckert, 54, fell just short of duplicating his runner-up finish at Lincoln. He did, however, have to work hard to make his way to the podium for the second straight night.

“That’s just because of bad qualifying,” said Eckert, who started 10th at Lincoln. “We’ve got to figure out how to get going early in the night.”

Eckert wondered whether he could have contested Sheppard for the victory if he had earned a better starting spot at the Grove.

“I was a little better than Gregg there at the end but I just couldn’t get him cleared,” Eckert said. “And Brandon wasn’t far ahead, so I don’t know … he was right there too, so I might have been able to run to him. But running to him and passing him are two different things.”

The five caution flags that slowed the race were all for minor problems. Jason Covert brought out the first yellow on lap seven when he slowed between turns one and two. Trever Feathers and Tyler Bare spun in tandem between the first and second corners on lap nine to trigger another caution. Subsequent slowdowns came on lap 14 when Boom Briggs hit the wall between turns three and four; lap 30 due to debris; and lap 34 when Ricky Weiss, who briefly reached second on a lap-nine restart before slipping as far back as ninth, relinquished fourth place because his car’s left-rear tire went flat.