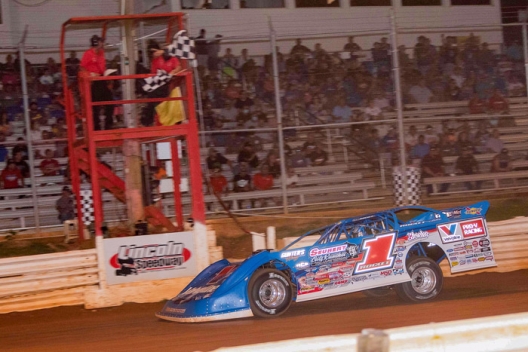 ABBOTTSTOWN, Pa. (Aug. 20) — And the beat rolls on for Brandon Sheppard.

Continuing the hot streak he began the previous week driving his family-owned No. B5, Sheppard returned to the World of Outlaws Morton Buildings Late Model Series and the seat of the Rocket Chassis house car with a flag-to-flag victory in Thursday’s 50-lap Billy Vacek and Huey Wilcoxon Memorial at Lincoln Speedway.

“It’s been such a great year,” said Sheppard, who entered the WoO circuit’s three-race Keystone State swing after winning four times in six DIRTcar Summer Nationals starts with his family’s XR1 Rocket from Aug. 11-16. “Considering the Covid (pandemic) bullcrap (hampering racing in 2020), we’ve been doing a lot of traveling and we’ve been doing a lot of racing. We can’t ask for much more than what we’re doing right now. We’re just having fun.”

Sheppard and Eckert outdistanced third-place finisher Ricky Weiss of Headingley, Manitoba, who settled for the final podium position after ceding the runner-up spot to Eckert on lap 30. Cade Dillard of Robeline, La., advanced two positions to finish fourth while Chase Junghans of Manhattan, Kan., climbed forward from the 15th starting spot for a fifth-place result that marked his first WoO top-five since a fourth on July 18 at Red River Valley Speedway in West Fargo, N.D.

Armed with the outside pole for the 50-lapper, Sheppard outgunned polesitter Dan Stone of Thompson, Pa., for the lead at the initial green flag and was never headed. He maintained a steady edge of approximately a half-straightaway over Darrell Lanigan of Union, Ky., for most of the race’s first caution-free 23 laps and continued with the same advantage while Weiss and the 10th-starting Eckert battled for second after overtaking a fading Lanigan on the restart just before the halfway mark.

Sheppard’s lead began to shrink soon after Eckert, 54, gained control of second from the 31-year-old Weiss following a pair of lap-30 caution flags. With Sheppard striving to decipher the fastest of Lincoln’s multiple grooves, Eckert closed in.

“It was a very racy racetrack,” Sheppard said. “It had a little mud ring around the bottom, the middle was pretty good and it had a big cushion up around the top. It was kind of all over the place. We could pass lapped cars in the middle, bottom or the top, so it was fun.

“It was just hard to be out there leading when the line was changing the way that it was.”

A red flag on lap 37 for a wild turn-three flip by Jason Covert of York Haven, Pa., who escaped injury when he bicycled and rolled his Cameron-Mann Motorsports car while running eighth, helped Sheppard reset for a final dash to the finish.

“I just committed myself to the middle-bottom in (turns) one and two after that red,” Sheppard said. “It took me a few laps to get my momentum going, and obviously Rick’s been really good lately so I figured he was gonna be all over me there at the end and he was. He was a little bit different on tires than us so I think that helped him, but we’ll just take note of that and know next time we come back.

“I thought I was about the best when I’d enter low and swoop out in one, and then in (turns) three and four I pretty much ran the top most of the time. (Crew chief Danny White) was telling me (with signals), especially there at the end, that I didn’t have much gap (on Eckert) and that I needed to be a little bit better here in one and two, so that’s when I moved around and was trying to find the right line.

Eckert wasn’t able to keep his self-owned XR1 Rocket with Sheppard following the lap-37 restart, but he found a way to mount a final bid after the race’s fifth and final caution flag was displayed on lap 42. He stayed within striking distance of Sheppard the remainder of the distance and even peaked underneath B-Shepp several times in turns three and four, though the defending WoO champion never caught a glimpse of his closest pursuer.

“No, I didn’t see him, but I kind of had a feeling he was there,” Sheppard said. “I felt the top was getting slow there in one and two, and I was trying to move around but I really couldn’t get my momentum just right until right at the very end of the race.”

A lane change in the final circuits allowed Eckert to make the race interesting.

“Before that red flag come out I think (Sheppard’s crew) moved him down and got him in my (inside) line there,” said Eckert, who won three consecutive Dirt Late Model championships at Lincoln from 1989-91 when he was beginning to make a name for himself in the division. “He would dirty it up for me and I really couldn’t go lower, so I got to where I’d try to go above where he was.

“Then I lost time and I got mad, so I went to the bottom of three and four and I gained on him. And every lap I’d gain on him down there, and then I’d lose a little in one and two … the opposite of what I was doing before the red flag.

“But ain’t nobody can beat that guy, so we gave it our best effort,” he added. “We caught him at least.”

Weiss started and finished third in his Bloomquist Race Car. He found himself hampered by the race’s red flag.

“My car felt about 20 percent better before that than it did after,” said Weiss, who made his first career start at Lincoln. “It just cools down the tires and stuff … the car just didn’t feel the same.”

Racing hard for second with Eckert during the feature’s middle stages, however, made the night memorable for Weiss.

“I would get a run, and then he would get a run,” Weiss said. “I think any one of our cars could’ve won that race. Either one of us could’ve run him down had we not been racing each other, but again, they call it racing … you can’t just let someone go by.

“We were door-to-door, running each other clean. It was fun.”

The race’s five caution flags were caused by Boom Briggs, who spun in turn two on lap 23; a Dennis Erb Jr.-Brent Larson tangle between turns three and four on lap 27; Bobby Pierce slowing on lap 30 in the M. Teats Transports No. 11v he traveled to Pennsylvania to compete; Coleby Frye spinning in turn three on the lap-30 restart; and Tyler Bare slowing on lap 42.

Notes: Sheppard recorded his 67th career WoO triumph, moving him within seven wins of Darrell Lanigan and 10 of Josh Richards on the tour’s all-time victory list. … Sheppard’s checkered flag also gave him a rare Lincoln Speedway double: he won at the identically-named tracks in Illinois and Pennsylvania in a span of just five days. “I don’t think anybody’s ever done that probably,” B-Shepp said with a smile. … With the event co-sanctioned by the Zimmer's United Late Model Series, Sheppard was credited with his first-ever victory on the Chris Zuver-promoted tour. ... Eckert won last year’s inaugural Vacek and Wilcoxon Memorial, a race organized by Viper Motorsports owners Shawn and Lisa Martin to honor the memory of two well-known figures in Mid-Atlantic racing. Wilcoxon, who operated MBH Race Cars, died in April 2014 of a massive heart attack while his step-son Vacek lost his life in June 2019 in a tragic camper fire while he was employed as a Rum Runner Racing crewman working with his good friend Brandon Overton. … Six of the race’s top seven finishers were first-time Lincoln starters. … Lanigan faded to an eighth-place finish due to a blistered right-rear tire on his Barry Wright Race Cars house car fielded by Viper Motorsports. … Boom Briggs drove an XR1 Rocket car that he recently purchased from Jacob Finnerty, whose No. 1J was still on the machine’s doors. … Scott Bloomquist retired from the race on lap nine after going a lap down. … The WoO tour moves continues its Pennsylvania swing on Friday at Williams Grove Speedway in Mechanicsburg and Saturday at Eriez Speedway in Hammett.