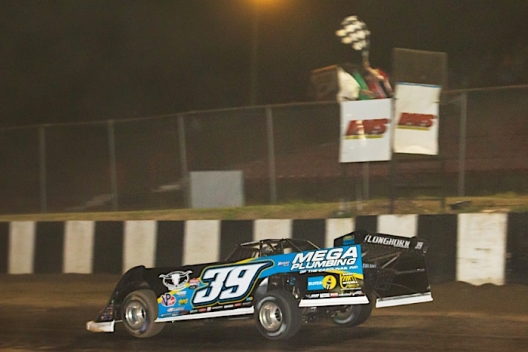 Series points leader Jimmy Owens of Newport, Tenn., dominates most of the way, then Tim McCreadie of Watertown, N.Y., swoops in late to take the victory.

So it was Thursday at Batesville Motor Speedway as McCreadie, making an outside pass on the race-dominating Owens with two laps remaining in the caution-free 30-lapper, earned $5,000 in the first of two Comp Cams Topless 100 prelims at the 3/8-mile oval.

“It’s tough to lead here when you come on lapped traffic, and that’s probably part of it,” McCreadie said, adding that the track surface “just laid a little strip of rubber getting into (turn) three that kind of scotched my car real good. … If I was leading, it probably would’ve been Jimmy doing it to me.”

The sixth-starting McCreadie’s victory, six nights after her overtook Owens for a $50,000 victory in the Sunoco North-South 100 at Florence Speedway in Union, Ky., put him in the driver’s seat for preliminary points that will set the lineups for Saturday’s $40,000-to-win main event at Batesville.

The polesitting Owens, who has led 209 of 230 Lucas Oil feature laps in August with a single victory to show for it, finished 0.986 seconds behind at the checkers while Dale McDowell of Chickamauga, Ga., finished third. Earl Pearson Jr. of Jacksonville, Fla. — with just his third top-five finish of the season — and hometown driver Billy Moyer Jr. rounded out the top five finish in the whirlwind prelim.

Owens led comfortably over McDowell most of the way, but when McCreadie took the second spot from McDowell on the 19th lap, he began tracking down the leader amid traffic on the high-banked oval.

The higher-running McCreadie pulled alongside Owens with two to go — Owens still led by a nose — then made the winning pass for his fourth series victory of 2020, two in February and two in August.

McCreadie was pleased with the continued progress of his Longhorn Chassis house car in his first victory at Batesville since April 8, 2017.

“I stayed out on the road with the guys (after Florence),” McCreadie said. “We went all the back to Longhorn (Chassis in North Carolina) and worked on some things, and, like I said, this deal is not easy no matter how many guys win. I know sometimes they make it look easy, but it’s tough. These guys, if you make a small mistake, they’re all over you, and tonight (for me) it was just the benefit of being second in heavy lapped traffic. We’ll take it and move on to tomorrow.

“For me personally, it’s just a constant buildup of trying things to get better. We weren’t exactly like we were last week, and we’ll just build on that and try some things. … We try out best to improve on what we’ve got every time, and I feel like we at least made some changes to try to get better. Tonight it worked out and we’ll go look at our notes and see what the track did and hopefully come after ’em again tomorrow.”

The runner-up’s car wasn’t as strong at the end as it was as the beginning.

“We tried a couple of things tonight, and we’ll throw something else at it again tomorrow night,” Owens said. “We were good early, but once we got into them lapped cars and got into that dirty air, I just couldn’t come off the corner anywhere and didn’t really know where to be on the track. … We moved around and moved up a little bit, but it seemed like the bottom was the dominant way around through there. But I just couldn’t get through the center of the corners as good as I wanted to.

“Tomorrow will be a total different day, and (Saturday’s) 100-lapper will definitely be something to look forward to. But maybe we can get this Ramirez Rocket up front tomorrow night and get another good run.”

McDowell, whose last Topless 100 start came with at third-place finish in 2015, was steady in securing a podium spot.

“We hadn’t been out here in three or four years and been watching it on all streaming, and checking everything out,” McDowell said. “But we’re closer. Those guys have been on fire there and they’re racing a lot more than we are. We’re making adjustments — (brother and car owner) Shane (McDowell) did an awesome job making adjustments — so hopefully we can take and tweak and just improve for tomorrow night, then for the big event Saturday night.”

Notes: Josh Richards of Shinnston, W.Va., had to start on the tail because his deck height was too high in pre-race inspection; he was scheduled to start 17th. …  The first consolation started with a tangle out of turn four back in the pack that damaged the cars of Jeff Roth and Mike Marlar. … Ricky Thornton Jr. led early in the fifth heat but a broken driveshaft forced him out; he missed transferring to the feature by one spot in a consolation race.

Jimmy Owens of Newport, Tenn., cruised to a win in the first heat. “The track’s really good right now. It’s a little washboardy down in (turns) one and two,” said Owens who expects action to be “all over it” in the the 30-lap feature. … Mike Marlar of Winfield, Tenn., tore the left front flopper off of his new Longhorn when he clipped the inside wall in the first heat. He tried to make anther lap, but had to pull his ill-handling machine back to the pit area. Things got worse for Marlar in the consolation when he was involved in an opening lap crash and tore up the car’s right side. … Shannon Babb of Moweaqua, Ill., is back in his Bloomquist Race Car on Thursday after spending the bulk of the DIRTcar Summer Nationals in his Rocket XR1 Chassis. … Second-heat winner Billy Moyer Jr. of Batesville, said his car needed to be just a little better in the feature. “We’ve got to be a tick better when this (track) slows down a half second,” said Moyer Jr. “We’re really close. We’re not the fastest car here, but we’re close.” … Tim McCreadie of Watertown, N.Y., dominated the third heat, winning by 4.260 seconds ahead of Kyle Bronson. … After Dale McDowell of Chickamauga, Ga., won his heat ahead of Tyler Erb around the bottom of the track — while Erb chased him on top — McDowell said he expected a tiny grove to stay around the bottom while the top would come in for the feature, with racing all over the track in the main event. … Earl Pearson Jr. of Jacksonville, Fla., started on the pole of his heat, fell back to fourth and then rallied to beat Spencer Hughes by a car. Tanner English finished third after leading with a lap to go. … Ricky Thornton Jr. of Chandler, Ariz., had mechanical trouble in the fifth heat, giving up the second spot. He started last in the second consolation and rallied to fourth, one spot short of transferring to the feature. … Brandon Overton of Evans, Ga., last year’s Topless 100 runner-up easily won the sixth heat over Shane Clanton. … Reigning Topless 100 winner Chris Madden of Gray Court, S.C., finished third in the sixth heat his Rum Runner Motorsports debut. … No provisionals will be added to Thursday’s or Friday’s lineups. … Country music singer Dylan Scott of Monroe, La., is among those attending Thursday’s race. Scott, who lives in Nashville now, is a co-promoter of Monroe’s Revolution Park Racing and Entertainment Complex, an asphalt track converted to dirt for 2020. … Scott Bloomquist of Mooresburg, Tenn., who is not in attendance as he’s chasing the World of Outlaws Morton Buildings Late Model Series this season, will miss his first Topless 100 since 2000. He was actually at the event in 2000, qualifying ninth, but blew his engine while leading his heat race and then got in a crash in his consolation race. Until this year, Bloomquist had attended every Topless 100 since 1996.