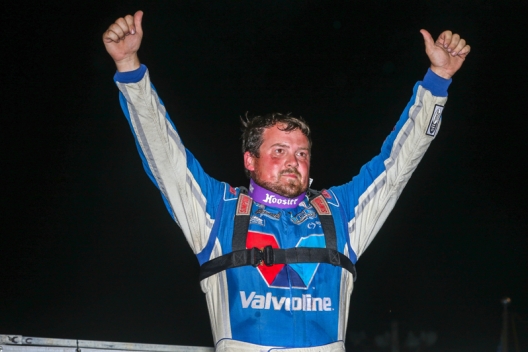 LINCOLN, Ill. (Aug. 16) — After losing the lead when he ran into the back of a slower car, Brandon Sheppard needed a little help to get it back. A caution did the trick. Getting a reprieve via a lap-26 yellow flag, Sheppard, of New Berlin, Ill., rallied by Frank Heckenast Jr. of Frankfort, Ill., on lap 32 and went on to win Sunday’s 40-lap DIRTcar Summer Nationals feature at Lincoln Speedway.

Sheppard led the first 15 laps from his pole position, but ran into trouble — literally — when he hit Tim Lance Jr., of Brimfield, Ill., who he was attempting to lap. That allowed Heckenast to shoot by and into lead as lap 16 was scored. Sheppard managed to stay ahead of third-running Shannon Babb, however, and was in prime position to challenge Heckenast for the lead when the caution waved with 14 laps remaining, erasing Heckensast’s 1.240-second advantage.

Sheppard stalked Heckenast for the next five circuits before firing a slider through turns three and four to regain the point. He went on to finish 1.487 seconds ahead of Heckenast to claim his fourth Summer Nationals victory in six starts this week and a $5,000 winner’s check. Babb, of Moweaqua, Ill., finished third, while Jason Feger of Bloomington, Ill., and Steven Roberts of Jesup, Ga., completed the top five.

“There was a lapped car there and I didn’t know which way he was going,” said Sheppard. “I thought he was gonna enter in the middle and I was gonna zip around the outside getting into (turn) three. At the end of the straightaway … I don’t know, he decided to go to the wall and got into my left front. It’s an old Rayburn car and my left front flopper got hooked on his bumper.

“I didn’t realize it was hooked, so I hit the brakes to try to turn underneath of him and we were hooked up, so I just started kinda panicking trying to get off. Finally I cranked the wheels to the right and got off of him and then turned back down the track and Frankie was there and had already passed me.”

Heckenast, who started on the outside front row, streaked by into the lead and motored away while behind him, Sheppard fought an ill-handling car. The contact with Lance Jr., caused a body rub and Sheppard had to battle a machine that occasionally had a mind of its own.

But when Mike Glasscock stopped against the wall in turn two on lap 26, Sheppard got the break he needed. Not only did it wipe out Heckenast’s advantage, it also gave Sheppard an opportunity to slow to a stop and have an official take a gander at the body damage.

“At that point I had to get up on the wheel and my flopper was into my left front tire and it was just kinda all over the place for awhile,” Sheppard said. “Luckily the caution came out and they pulled my left front flopper out of the tire and I was able to steer again at that point.

“Then I just had to get up on the wheel and I turned down across the bottom there a few times and (Heckenast) must have seen me ‘cause he went down there the next lap and I went back to the top and that let him be slow across the center of the corner and I got a run and slid him. That was what it took to win the race tonight. I definitely didn’t want to put myself in that position. I probably should have just tried to turn underneath that lapped car. We were still able to get it done, so it’s cool.”

Heckenast felt like he may have had a chance to win his second Summer Nationals race of the season without the caution. But, already concerned about his car’s setup, he knew he’d have trouble keeping Sheppard at bay once the yellow flag bunched the field again.

“Our car was OK. It was a third or fourth-place car,” said Heckenast. “I pulled out there and realized I screwed it up, or didn’t really make the right changes. We needed some traction to get the car up in attitude and I had it too unpostured there. In the beginning it was OK when the crumbs and everything was keeping it up. I felt like we were alright if that caution didn’t come out.

“When that caution come out, I was riding around trying to get the car up in attitude and I’m like, ‘Oh boy we’re in trouble here. I know Brandon’s gonna be a lot better.’ I was just trying to drive as hard as I could, but when your car won’t go down in the right front, it’s extremely hard to run the cushion. It was either try to junk it, or just try to hold him off, so that’s what happened.”

Sheppard, who pulled ahead Heckenast Jr. on the opening lap and built a lead of nearly a full straightaway, continued his Summer Nationals domination — he’s now won four of the last six events — in his family owned No. B5 while taking a brief hiatus from his driving duties in the Rocket Chassis house car.

“Tonight I thought we could run with him,” said Heckenast. “We were quick time. I mean every time we went on the track we were fast. We were fast hot lapping. Third group, quick time overall (in time trials). I still know in the back of my mind that you’re racing the B5. He’s badass here. I don’t know how many of these freaking races he’s won.”

Heckenast said that despite being fast during prelims, he was never truly comfortable. He knew he needed to make an adjustment if he was going to keep pace with Sheppard. He simply didn’t adjust enough.

“All night I couldn’t steer through (turns) one and two … or three and four actually,” Heckenast said. “It’s one of those deals where you are supposed to come in and take your right front off and put something else on, but I mean, you’re quick and you’re quick and you’re quick, but it don’t feel good and you know when it gets slick something’s probably not gonna go the way you want it. Me and Cory made the decision to try to get (the right front corner of the car) down some more and it just wasn’t enough.

“We were two turns tonight from winning that race. I shouldn’t say that. Brandon, you know, God knows he grabs another gear every freaking time. You think you’ve got him beat and he just grabs another one. So, it would have been a closer race I should say if I had the right front right.”

Sheppard and Heckenast were certainly the class of the field. Babb never managed to challenge the two leaders, but for the second straight night he finished third. It was also his third podium finish in as many races to go along with a seventh and fourth over his last five Summer Nationals starts.

Notes: The win was Sheppard’s fourth career DIRTcar Summer Nationals triumph at Lincoln Speedway and his 24th series win overall, moving him into sole possession of seventh on the tour's all-time win list. He entered the night tied at 23 with Rick Aukland of Fargo, N.D., and Dennis Erb Jr. of Carpentersville, Ill. … Sheppard pocketed $25,000 in first-place earnings during the week, while also winning the weeklong points battle, which paid an additional $2,000. … Series points leader Brian Shirley of Chatham, Ill., finished 22nd after he was caught up in an accident on the opening lap. The race was red-flagged on lap one when 10th-starting Brett McKinnon of Carlylse, Ill.,  flipped in turnes three and four, collecting Shirley, Jordan Bauer of St. Jacob, Ill., and Mike Glasscock of Leroy, Ill. Shirley, Bauer and McKinnon were done for the night. McKinnon walked away unscathed. … It was one of three cautions that slowed the action. … Sunday’s race at the Logan County Fairgrounds oval marked the 14th time Lincoln has hosted a Summer Nationals event. … Sheppard snapped Shirley’s two-race win streak at Lincoln. … The series has a scheduled day off on Monday.

A gorgeous, mild afternoon — temps were in the mid-80s — welcomed drivers to Lincoln Speedway. Skies are clear as the DIRTcar Summer Nationals compete for the sixth consecutive night. … Sunday’s heat winners were Steven Roberts, Brandon Sheppard and Frank Heckenast Jr. … Sheppard, who won the third heat easily, drew the pole for the 40-lap main event. … Roberts took advantage of Rusty Schlenk’s miscue to win the first heat. Schlenk had a big lead, but pushed back in turn two and had to take his time getting back out of the heavy cushion, allowing Roberts to catch him and make a low-side pass going down the backstretch. … Series leader Brian Shirley ran into trouble in the first heat. He jumped the cushion and tagged the wall in turn one. Shirley missed the consolation race and is taking a provisional to start the feature. He’ll start 19th, his worst starting position of the Summer Nationals season. … Arkansas native Drew Roberts, who made the haul to Lincoln after competing at Florence (Ky.) Speedway on Saturday, is making his first career Summer Nationals start. … Sheppard his chasing his 23rd career Summer Nationals win; Heckenast his fourth; and Roberts his first. … The night’s first feature hit the track at 8:30 p.m.

Frank Heckenast Jr. of Frankfort, Ill., was the overall fast qualifier. Heckenast went out third in the third group and stopped the clock at 13.296 seconds, a full second slower than the Lincoln Speedway track record of 12.219 seconds set by Dennis Erb Jr. of Carpentersville, Ill., in 2009. Rusty Schlenk of McClure, Ohio, was the quickest in the first group with a time of 13.316 seconds and Jason Feger of Bloomington, Ill., was the fastest in the second group at 13.339 seconds. Series leader Brian Shirley of Chatham, Ill., was third in the first group (13.379 seconds) and Brandon Sheppard of New Berlin, Ill., was second in the second group (13.367).

Lincoln Speedway hosts Sunday's 19th round of the DIRTcar Summer Nationals with a $5,000-to-win purse on the line at the 1/4-mile oval. Along with Super Late Model hot laps and qualifying, there will be three heat races and a 40-lap main event.

Brian Shirley of Chatham, Ill., leads the tour to Lincoln. Shirley, with six wins on the year leads Frank Heckenast Jr. and Jason Feger in the tour’s points race. Brandon Sheppard of New Berlin, Ill., is among the 27 cars entered. Sheppard comes to Lincoln off a $10,000 victory at Federated Auto Parts Raceway at I-55 on Saturday.

The series is working its way out of Illinois. After Sunday’s race, there’s only one more points event for the Summer Nationals in the Land of Lincoln before the series wraps up in Michigan and Ohio. Sprints and modifieds are on Sunday’s card also.