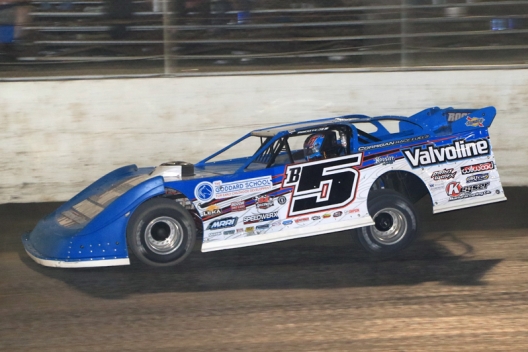 PEVELY, Mo. (Aug. 15) — Brandon Sheppard said Federated Auto Parts Raceway at I-55 is one of his favorite racetracks. There’s little wonder why. The 27-year-old driver from New Berlin, Ill., is absolutely superb there. Continuing his supremacy at the St. Louis-area oval, Sheppard led the final 17 laps Saturday for his third straight DIRTcar Summer Nationals triumph at the 1/3-mile track nestled between the Mississippi River and Interstate 55.

Sheppard, who started fourth, took the lead from polesitter and race-long leader Daryn Klein of Fairview Heights, Ill., on lap 34 and drove away to a commanding 5.144-second victory. He earned $10,000 to go with his five-figure Pevely paydays in 2017 and ’18. Both of those events were co-sanctioned by the World of Outlaws Morton Buildings Late Model Series.

“I can’t say enough about this car,” said Sheppard of the family-owned Rocket XR1 he’s driving while the World of Outlaws are on hiatus. “This car’s just been awesome night in, night out. It says a lot for Rocket Chassis. Their cars are just … every one of them out here is just so good. Brian (Shirley) has been really good night in and night out out here on the Hell Tour.

“Of course Frankie (Heckenast) has been good and (Shannon) Babb’s been good. It’s just a testament to how hard Rocket Chassis has worked to get this XR1 where it is, so I can’t thank them guys enough … Mark (Richards) and Steve (Baker) and everybody over there that puts in the hours to make these cars as good as they are. And of course my dad and my grandpa. I wouldn’t be were I am at right now without them guys.”

Shirley, of Chatham, Ill., rallied from 11th — his worst starting position in 18 Summer Nationals events this season — to finish a distant second, while Babb of Moweaqua, Ill., improved four positions to finish third, his second podium finish in as many nights. Ninth-starting Frank Heckenast Jr. of Frankfort, Ill., finished fourth and Billy Moyer of Batesville, Ark., completed the top five after starting second.

Klein’s bid for his first career Summer Nationals victory got off to a great start but ended in heartbreaking fashion thanks to crucial mistake on the final lap that dropped him from third to 10th. At the start of the 50-lapper, Klein shot straight to the freshly-farmed cushion and pulled away from Moyer.

“I knew when they tilled the top like they did and they dumped so much water on it I was gonna be pretty well covered,” said Klein. “We had the groove and we’re pretty good up there (on the cushion) here (at I-55). I knew I just needed to get up there and ride and just not kill my tires.”

After two cautions in the first 15 laps, the race went green until sixth-running Dennis Erb Jr. of Carpentersville, Ill., slowed on lap 29. By then, Sheppard was up to second and Heckenast had cracked the top five. Shirley, however, was still lingering back in sixth.

“I might have went a little too hard on that one long green flag stint in the middle part of the race,” said Klein. “I was struggling in the middle of one and two. I was getting tight before the hole and just couldn’t find a rhythm through there. When Sheppy went by, he seemed to get through there a little bit better than I did and that was where he was gaining the speed on me.”

Sheppard was finally in his own rhythm.

“I found a pretty good line in (turns) one and two that I was able to turn down off the cushion,” Sheppard said. “That cushion was pretty rough and treacherous up there and if you didn’t hit it just right, it would have you hung out coming off of (turn) two there. I found a pretty good line to where I could turn down off of it really nice and that was what was able to get me past (Billy) Moyer and get a good run down the back straightaway to pass Moyer and to pass Daryn.”

While Sheppard was not challenged after he grabbed the lead, Shirley slowed moved forward. He went to third on lap 40 and passed Klein for second on lap 43.

“I think they made an excellent call going out there and doing something to the track (during intermission) because it was getting black and he was worrying about it rubbering up. So kudos to them for going out and working it,” said Shirley, adding that he likely didn’t have anything for Sheppard at the end. “He would’ve been tough to pass. He’s a hell of a wheel man and his program’s as stout as can been too. So congrats to them.”

Klein was content to settle for third, but mistook the white flag lap for the checkered flag and slowed down, allowing a handful of cars to pass him.

“If you’re gonna run second to (Sheppard), no big deal right?” said Klein. “But we really started to struggle and then Shirley went by. Again, a top-three would have been awesome here. I thought I saw the checkered wave when the white waved and I let out of the gas and they all started driving by me like we was still racing for something … and we were. Just a mistake.”

Sheppard, meanwhile, continued to build momentum is his family-owned car. He’s now won three of his last five starts with a runner-up and 13th to go along with it.

“I’m ready to go to Lincoln (Sunday) for sure,” said Sheppard. “It’s another one of my favorite tracks. This whole week, this (Summer Nationals) swing has been so awesome. I wish we could do a swing just like this one every year because every one of the tracks are like my home tracks, what I grew up racing at. It means a lot for me to be able to get back here and be able to race in front of my family and some of my fans.”

Notes: Fifteen of the 22 starters finished the race with 10 completing 50 laps. … Rusty Schlenk bounced back from a flat in his heat to finish sixth. Schlenk had to run the C-main and eventually came up two spots short of transferring from the consolation. Making good use of a provisional, Schenk motored the though the field to finish sixth after starting 20th. “I had to pass a lot of cars out there tonight,” said Schlenk. … Dennis Erb gave up the sixth position because of a broken valve spring. He planned to head to engine builder Vic Hill’s to get a motor fixed before the four-race WoO eastern swing.

The front row of Saturday’s 50-lap features a stark contrast in Summer Nationals success. Polesitter Daryn Klein, the overall fast qualifier and first heat winner from Fairview Heights, Ill., about 45 miles from Federated Auto Parts Raceway at I-55, is seeing his first career DIRTcar Summer Nationals win, while outside front row starter Billy Moyer of Batesville, Ark., has accumulated a series-best 100 Summer Nationals victories during his hall-of-fame career. … The 30-year-old Klein won nearly half of his starts in 2019 (17 of 35) including I-55’s annual Pepsi Nationals. … Jason Feger, of Bloomington, Ill., outran Jeff Herzog by 2.258 seconds to win the fourth heat. It was a successful outing for Feger, who sits third in series points, after swapping motors Friday after the race at Fayette County. … The second heat was Summer Nationals royalty as Moyer finished first in front of Shannon Babb of Moweaqua, Ill. The two driver have a combined 198 career Summer Nationals wins. … Brandon Sheppard of New Berlin, Ill., winner of the last two series races at I-55 cruised to victory in the third heat. Sheppard redrew fourth and will start on the outside of row two in his chase for a third straight Pevely win and the 23rd of his career. … Brian Shirley of Chatham, Ill., starts 11th, his worst starting position of the tour. His previous worst was ninth at Tri-City Speedway in Granite City, Ill., on July 10, the second race of the season. Shirley has started either first of second 10 times. … Saturday’s provisional starters are Tim Lance, Rusty Schlenk, Rusty Griffaw and Trevor Gundaker. … Schlenk of McClure, Ohio, was the fastest during practice and was third in Group B during time trials, but he pulled off the track on lap seven of his heat with mechanical trouble. Schlenk rallied from the back to win the C-main and then charged through the field to finish fourth in the consolation, two spots shy of transferring to the feature. … Despite light rain showers to the north, officials decided to take about 30 minutes to rework the track.

The DIRTcar Summer Nationals visit Federated Auto Parts Raceway at I-55 in Pevely, Mo., for the tour’s second $10,000-to-win main event of the weekend and the 18th event of the season.

Brian Shirley of Chatham, Ill., continues to build on his series points lead. Shirley won Friday’s event at Fayette County Speedway on Brownstown, Ill., for his series-leading sixth win of the season. Four of his six victories have come in $10,000-to-win events. Shirley has never won a Hell Tour feature at I-55, however.

World of Outlaws Morton Buildings Late Model Series points leader Brandon Sheppard of New Berlin, Ill., who has won two of the last four series events, has a pair of series victories at I-55 as he’s won the last two visits. No one more victories at the oval south of St. Louis than hall of famer Billy Moyer of Batesville, Ark., as Moyer has six. His first win came way back in 1991, while his most recent came in 2012 and was the final victory of three in a row for the veteran driver at Pevely.

Hot laps, time trials, heat races and at least one consolation race (if needed) precede the night’s main event with a starting field of at least 22 Super Late Models. Modifieds and pro mods are on the undercard. Action is slated to begin at 6:30 p.m.