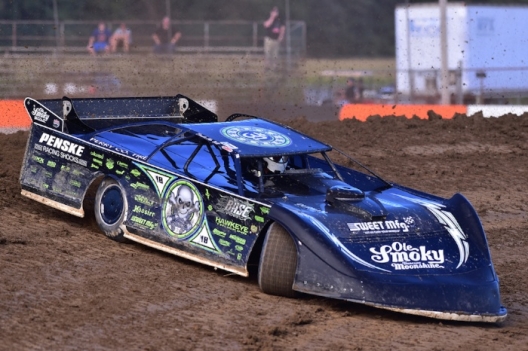 ATTICA, Ohio (Aug. 29) — Making his first ever visit to Attica Raceway Park, Scott Bloomquist survived a two-lap dash to the finish for his fifth Lucas Oil Late Model Dirt Series victory of the season worth $10,000 on Detroit Chocolat Night.

“It was a little bit of work out there, depending on how you came off the corners with those ... moguls I guess you’d call them," said Bloomquist, who continued his penchant of winning his first visit to a racetrack. "They’d definitely throw you around. You had to pay attention where the wall was at.

"The car was awesome. I could run anywhere on the racetrack. But with two (laps) to go I felt something, like something jarred on the car. Like a lot of races this year, I was wondering if I’d lose this on the last lap.”

Bloomquist wanted to make sure he didn’t end up second during a season when runner-up finishes have been plentiful.

“We are a little short of help this weekend, but everybody did a great job," Bloomquist said. "I had to groove the tires and do some other things, but overall the car handled so well all night long. We have been so close to winning other races this year. I was determined to win this tonight.”

Both Francis and Pearson took a shot at Bloomquist in the final two circuits, but they came up short of going to victory lane.

“I caught a rock about halfway through and tore the faceshield off, so we just were trying to see where we were going,” Francis said. “We are really running well here lately. It’s great to be back in the mix for a win. Scott could run straighter up off the corner than we could. I slipped back to fifth at one point, and the car was so much better up top. We just didn’t have anything for Scott on that final restart. The way it turned out, we were fortunate to hold off Earl for second.”

Pearson was glad to be in the mix, too.

“With the way our season has gone this year, I didn’t know what was going to happen on that final restart,” the four-time series champion said. “The car was good all race long, it would run better down low on the track. I thought I was going to get by Steve there a couple of times, but we will take this finish. I think we run third here last year. Hopefully when we come back we can move up a spot or two.”

In the 50-lap feature, Bloomquist and Francis brought the field to green with Bloomquist gaining the advantage over Pearson, Francis, Owens and Zeigler, winner of July’s UMP DIRTcar Summernationals event.

Just as the frontrunners entered heavy lapped traffic, a caution flew on lap 12 when Ryan Markham stopped with a flat tire. Prior to the yellow flag, Bloomquist made a daring move, splitting two lapped cars in turn three.

As Bloomquist drove away, Pearson took second on lap 15, bringing Zeigler to third. Zeigler grabbed second on lap 17 and he Pearson and Francis continues to battle hard over the next hand full of laps. The caution would fly for a Rocky Owens spin on lap 17.

When the race went green again, Bloomquist drove away from the tremendous battle for second with Zeigler, Francis and Pearson taking turns in the spot. Pearson took the runner-up son on lap 20, but Zeigler continue to hound him.

The leaders found lapped traffic on lap 29 and Bloomquist had a nearly three-second lead over Francis, Zeigler, Pearson, Owens, Don O’Neal and Birkhofer. Nothing changed up front until Pearson moved into third on lap 41.

Bloomquist was on cruise control, extending his lead to nearly four seconds when the caution flew with two laps to go as Jason Papich spun in turn four. That tightened the pack, but Bloomquist held on for the victory.