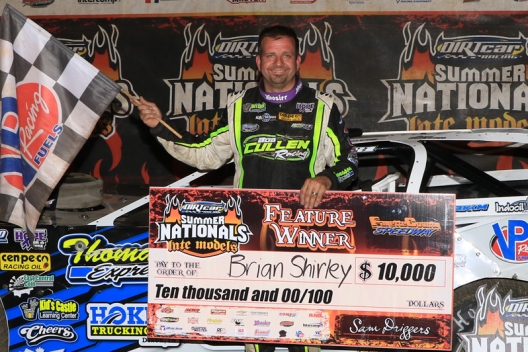 BROWNSTOWN, Ill. (Aug. 14) — Staying free of trouble that bit a number of pursuers, Brian Shirley of Chatham, Ill., won Friday’s DIRTcar Summer Nationals main event at Fayette County Speedway. Shirley led all 50 laps from the pole for a $10,000 triumph and his sixth series win of the season. Ninth-starting Shannon Babb of Mowequa, Ill., went catfishing late in the race and almost caught the winner.

Working as low as he could around the infield tire barriers in the final laps, Babb cut Shirley’s nearly two-second advantage in half with two laps remaining. He cut the deficit in half again on the final circuit before finishing a car length — 0.404 of a second — behind at the finish.

“I had a harder tire on. Those last couple of cautions, I’m not sure it was as good as what we needed to be,” said Shirley. “Those guys were trying to creep that bottom pretty good and I think it was just a little better advantage for ‘em. But once we was in clean air, I felt like we were in control of the situation and the car was pretty good.

Dennis Erb Jr. of Carpentersville, Ill., who started third, completed the top three. Erb grabbed second on the opening lap and held it for the first 22 laps. After losing the spot to Brandon Sheppard of New Berlin, Ill., Erb fell back as far as sixth before moving back forward. Fifth-starting Frank Heckenast Jr. of Frankfort, Ill., finished fourth despite being involved in a tangle with Sheppard that ended Sheppard’s night while sending Heckenast to the back of the lead-lap cars. Rodney Melvin of Benton, Ill., who started 17th after winning the consolation race, soldiered to a fifth-place finish.

Sheppard and Heckenast were running second and third on a lap-37 restart when contact between Sheppard and Shirley sent Sheppard spinning in front of Heckenast, who had no where to go. Both drivers spun into the turn three infield. Sheppard, who suffered a broken tie rod, parked his family-owned Rocket, while Heckenast was forced to tag the rear, even though the incident wasn’t of his own doing.

“I honestly couldn’t see (Sheppard),” said Shirley. “Sheppy just come over and said he shoved up a little bit and got into my left rear. I’ll definitely take a look at the video and make sure I didn’t do anything wrong. But he come over and told me that I did a great job and he just pushed a little bit I guess. All in all, I’m happy that he’s not mad because I’n never want to wreck anybody, let alone somebody that helps me out a lot.”

But 11 laps later, calamity struck three of the front runners. Jason Feger, who passed Erb for fourth on lap 33, broke a motor four laps later, his green and black MB Customs machine billowing smoke to bring out a caution. On the restart, Sheppard got great drive in the middle of the track and pulled alongside Shirley, but as Shirley drove back down off the cushion exiting turn two, they made contact.

“I hit (Shirley) in the left rear and it bent the tie rod in half and it spun me and just collected Frankie in the aftermath,” said Sheppard, still wearing his driver’s suit nearly an hour later as his team finished repairing his car.

With Feger and Sheppard out, and Heckenast to the back, Billy Moyer of Batesville, Ark., was elevated to second, but the hall-of-famer who has one career Summer Nationals win at Fayette County, didn’t stay there long. Erb took second from Moyer on the restart, only to give the spot to Babb two laps later.

On lap 43, fourth-running Moyer pulled to the infield with mechanical trouble, giving the position to Heckenast, who had just re-entered the top five. Babb meanwhile worked the hub to perfection over the final 10 laps, but ran out of time before he could make a bid for the lead.

“The track was excellent tonight. I haven’t seen it this good in a long time,” said Babb. “Usually it’s real top dominant, but the bottom was there tonight and we was able to use that. I had a lot of fun racing tonight. I screwed up in the heat race and I had to start deep (in the feature), but you know we was able to come up through there.”

“(Shirley) was doing his job. He’s been real sporty here lately. I was just trying to inch up on him. Sometimes if he were to mess up I might have caught him and then he makes a good corner and I’d mess up. That’s what makes racing good racing.”

Notes: Shirley picked up his third career Summer Nationals victory at Fayette County. He also won there in 2018 and 2012. … The race was slowed by five cautions, including one on the opening lap and two on a the lap-37 restart. … Eleven of the 22 starters finished the race, with seven completing all 50 circuits. … Rusty Schlenk of McClure, Ohio, was running seventh when he pitted with mechanical trouble on lap 37. … Steve Casebolt of Richmond, Ind., was also a lap-37 retiree due to engine overheating.

Brian Shirley of Chatham, Ill., who won the first heat, drew the pole for the 50-lap main event. He’s chasing his third career DIRTcar Summer Nationals win at Fayette County Speedway. … Jason Feger of Bloomington, Ill., will start second, while Dennis Erb Jr. of Carpentersville, Ill., starts third and Brandon Sheppard of New Berlin, Ill., fourth. … With two wins apiece, Shirley and Sheppard are the only two drivers with more than one Summer Nationals victory at Fayette County. … There are six former winners in the starting lineup: Shirley, Feger, Erb Jr., Sheppard, Billy Moyer of Batesville, Ark., and Shannon Babb of Moweaqua, Ill. … The other thing the six have in common? They’re all former series champions. … Babb had a comfortable lead over Shirley in the first heat when he got too high in turn four, smacking the embankment on exit and cutting down a right rear tire with two laps remaining. He managed to finish third in the heat. … Brothers Gordy Gundaker and Trevor Gundaker of St. Charles, Mo., each experienced trouble in prelims — at the opposite ends of their Black Diamond Chassis. Gordy broke a rearend in his car during hot laps and Trevor had engine trouble during his heat. … Despite temperatures hovering in the mid-80s on Friday, the humidity — which was well above 80 percent — had fans and competitors alike looking for a cool spot. Afternoon showers, which dropped sporadic rain drops around the facility, were gone by early evening. … Friday’s 41 drivers represent seven states: Arkansas, Georgia, Illinois, Indiana, Mississippi, Missouri and Ohio.

Shannon Babb of Moweaqua, Ill, was the overall fast qualifier among 41 entries. Babb was the fifth driver on the track in the first of two groups and set the mark at 13.045 seconds to earn the pole position in the first heat.  Daryn Klein (13.081 seconds) of Fairview Heights, Ill., was second quick in Group A and will start in the pole of the second heat. In Group B, Steve Casebolt (13.493) of Richmond, Ind., was quickest. Casebolt was the first car on the track in the second group. Bob Gardner (13.570) of East Peoria, Ill., was second quick. Casebolt and Gardner earned the pole for heats three and four, respectively.

The DIRTcar Summer Nationals visit Fayette County Speedway in Brownstown, Ill., for the tour’s first $10,000-to-win main event of the weekend and the 17th event of the season.
Brian Shirley still leads the tour as the of Chatham, Ill., driver enjoys a healthy 164-point lead over Frank Heckenast Jr. of Frankfort, Ill.