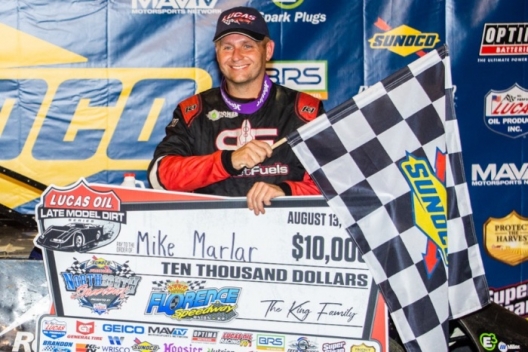 UNION, Ky. — What initially appeared to be another cruise to victory lane for Jimmy Owens on Thursday at Florence Speedway turned into a free-for-all late in the 50-lap North-South Shootout.

And it was Mike Marlar of Winfield, Tenn., coming out on top of the late scramble, diving under Brandon Overton entering turn one on the final lap and rubbing past the leader to grab a $10,000 Lucas Oil Late Model Dirt Series victory and the first of his career at the half-mile oval, one of his favorite tracks.

The sixth-starting Marlar scored his second overall victory of the season and first on the Lucas Oil Series since July 4, 2019, at Portsmouth (Ohio) Raceway Park.

“Racing’s a humbling sport, and when you can get a win, it’s a nice lift,” Marlar said in victory lane.

Evans, Ga.’s Overton, who discovered he had a deflating tire after the race, settled for second with ninth-starting Zack Dohm of Cross Lanes, W.Va., in third.

Owens, the Newport, Tenn., driver who led 50 laps a night earlier at Florence for his eighth Lucas Oil victory of the season, was dominating again Thursday until late in the race when his pursuers caught him. Marlar said it appeared Owens had a badly vibrating wheel that dropped him to fourth at the finish, one spot ahead of 11th-starting Tim McCreadie of Watertown, N.Y.

Polesitter Kyle Bronson of Brandon, Fla., was running second on the 15th lap when when he pulled up lame on the frontstretch with a broken J-bar and was pushed to the infield for the race’s lone caution.

Marlar battled with Dohm and Josh Rice for the fifth spot most of the race, and it was a worthwhile battle to watch with Owens cruising out front with two- and three-second margins over the second-running Josh Richards of Shinnston, W.Va., much of the race.

But things got interesting on lap 41 when Overton slid into Richards exiting turn two with neither driver giving an inch. Overton escaped with the second spot while Richards showed left-front damage that hampered him the rest of the way in finishing sixth.

Marlar and Dohm were among drivers taking advantage of the Overton-Richards scrape, and soon enough all the pursuers were gaining on Owens, who until then hadn’t been challenged.

With Owens losing his potency, Overton grabbed the lead on the 46th lap with Marlar and Dohm following suit. The high-running Marlar moved in to pressure Overton in the race’s waning moments, then dove underneath the leader, rubbing past in turn one and leading only the 50th lap.

“I knew I was a lot faster around the outside, and I didn’t want to do that crossover move because I was afraid we’d rub, and I really knew I could pass him down there on the last lap,” said Marlar, who was afraid Overton’s crew would signal him to move higher on the track to block his winning move.

“I just took advantage of it. I hate that I rubbed him and he rubbed me a little bit earlier in the race … when you race hard like that, stuff happens. I really didn’t think I was going to rub him there.

“We had a heckuva race either way. Jimmy got something in his wheel and it got to vibrating there, and I seen that and I knew I needed to do something to get by him, because he was going to be backing up. It was an awesome race. The cushion, I didn't think there was anything left up there, but there was a little bit.”

Overton, whose summer hot streak included a $50,000 USA Nationals victory Saturday on the World of Outlaws Morton Buildings Late Model Series at Wisconsin’s Cedar Lake Speedway, was disappointed with second but glad to improve on his 10th-place run a night earlier.

“I don’t know, I’m looking right there, we’ve got a tire going down,” Overton said, gesturing toward his car. “I don’t know if when me and Josh got together, it started going down then.

“Hats off to Mike. I know he didn’t do anything with intention, just hard racing. We hit a little bit, but congratulations to them, and definitely a better night than what we had last night. We had to totally redo our car and it’s a lot better, so I’m proud of that.”

Dohm wasn’t quite within striking distance of the leaders, but his methodical run in the low groove paid dividends.

“We seem to do better in the longer races. I’m pretty excited for (Saturday's 100-lapper. We’ve gotta get in it first. We struggle more qualifying and all that than we actually do with the racing part. So I guess that’s a good problem to have” Dohm said. “I was back there racing with (Marlar and Rice), and I felt like they were kind of in my way, but I didn’t really. I don’t like to rough people up or anything like that. I try to keep my nose clean, and hopefully it’ll pay off later in the race. They started coming back to us and we were going up through there, then Mike run (into) Brandon. I’m sure that tire going down probably had a little bit to do with it. We caught them three leaders real quick. I wish this race would’ve been 10 more laps, I know that.”

Action continues at Florence on Friday with preliminaries for the Sunoco Race Fuels North-South 100 with a double-heat race format. Saturday’s action concludes four nights of racing at the half-mile oval with the $50,000-to-win main event.

Notes: Marlar, who drives for car owner Ronnie Delk, has 13 career Lucas Oil Series victories. … He'd previously won at Florence in the modified division, but not in Late Models. ... His only previous 2020 victory came in WoO action at Smoky Mountain Speedway in Maryville, Tenn. “We know we’re a capable team. We’ve just taken off a lot this year, but we’re back. We’ve really hit it hard this last month and I can tell my driving’s a lot better and I’m getting my car better, and a lot of things are working for us here.” … Tyler Erb picked up $2,034 for fast time from donations in memory of Doug Lee, a late Florence supporter. ... Officials announced Sunoco has agree to a three-year renewal as official fuel of the series and North-South 100 sponsor. … Drivers at Florence on Thursday who didn't enter Wednesday: Devin Gilpin, Kent Robinson and Shannon Thornsberry. ... Jonathan Davenport, Tim McCreadie and Devin Moran brought new Longhorns to Florence for the weekend. … Jensen Ford of Piney Flats, Tenn., making his debut at Florence, has scratched for the week because of engine problems. He never took a competitive lap on the track.