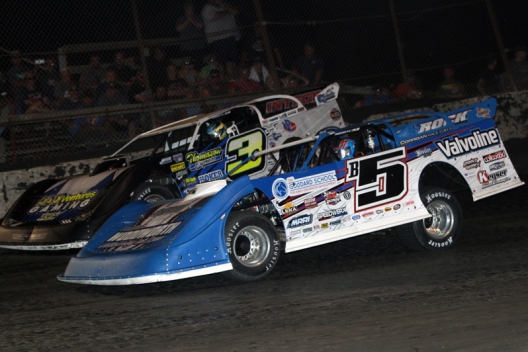 MACON, Ill. (Aug. 13) — Brandon Sheppard’s accomplishments are well documented. He’s a three-time winner of the Dirt Track World Championship. He’s won the Dream and the Dirt Million. He’s a two-time World of Outlaws Morton Buildings Late Model Series champ and he won his lone DIRTcar Summer Nationals championship when he was just 20. The list goes on and on.

Amazingly enough, however, in 21 career Summer Nationals victories before Thursday, Macon Speedway’s Herald & Review 100 wasn’t one of them. Sheppard’s best finish in the long-running race at the track just an hour from his New Berlin, Ill., home was second place, twice, as victory in Mighty Macon’s premiere event seemed to elude him.

No more. Adding another prestigious Illini State victory to go with his three Illini 100 wins at Farmer City Raceway and his two Prairie Dirt Classic triumphs at Fairbury Speedway, Sheppard can now add Macon’s Herald & Review 100 to his growing list of home-state conquests.

Sheppard took the lead from Brian Shirley of Chatham, Ill., on lap 81 and led the rest of the way to win Thursday’s DIRTcar Summer Nationals race at Macon. He earned $5,000 for his 22nd career Summer Nationals triumph, but more importantly — perhaps even more meaningful than the prize money — Sheppard finally notched his first career Herald & Review 100 win.

“It’s phenomenal. I think I was more emotional right there (in victory lane) than in my last (World of) Outlaws race I won for sure,” said Sheppard. “It’s a special place for me just because I’ve been coming here … since I was born you know, sitting in them grandstands over there. My family’s been participating in this race for a long time and had a lot of good runs and a lot of them taken away from us. My uncle Ed (Bauman) has won it twice and it feels really good to get one for him and for my grandpa and for my dad of course.

“This Rocket Chassis was just flawless. We had to work really hard on it to get it where it needed to be, but it tuned right in. It always does. That says a lot about Rocket Chassis and Steve Baker and Mark Richards and how much work they put into these things to make ‘em what they are. We working really hard trying to win these races and it’s paying off right now.”

“I have not won a race here since I got in a Rocket Chassis,” said Sheppard. “I’ve started on the pole of the Pick-A-Part 100 (and) the Herald & Review. I’ve started up front in a lot of ‘em and just faded there halfway through the race. It’s usually because I’m knocking the deck out of it already. I think just being out on the road and getting the more experience that I need and getting better in the longer races helped me tonight for sure. And of course my car being so good helped also.”

While Sheppard was good late, Shirley was phenomenal through the first 50 laps. He drove straight to the cushion and into the lead on the opening lap and pulled away, setting a torrid pace that allowed him to catch traffic in three laps while quickly putting backmarkers in arrears. After a pair of early cautions — one on the initial start and one on lap two — the next 50 circuits were clicked off caution-free as Shirley lapped up to the sixth-place car of Schlenk.

Shirley put seventh-running Gordy Gundaker of St. Charles, Mo., the two-time and reigning Herald & Review winner, a lap down on lap 50 and was closing in on Schlenk and Erb when the caution waved on lap 52 for Allen Weisser of Peoria, Ill. Within a few laps of the restart, Sheppard began challenging for the lead, pulling even on laps 64 and 66 and again on lap 79.

“I could he patient there at the beginning and could still stick with Brian there, so I knew I wasn’t pushing myself as hard as I normally have to,” Sheppard said. “So I knew I was pretty decent there. About halfway I seen him start to shove the right front a little bit and I could kinda be down on the track and be OK. I could roll the middle there pretty good and stay with him in (turns) one and two. I think that is what won me the race because he was running in there up into the cushion and I could lay down off of it and keep the tires underneath me and keep going. I didn’t feel like I was sliding my left rear too bad and I never really felt like I overheated my tire, so I think that is what won me the race.”

With Shirley again in lapped traffic and married to the outside grove, Sheppard finally secured the lead on lap 81.

“I think he was a little better down the racetrack in (turns) one and two,” said Shirley. “It’s just how Macon is. You get to lapped traffic and you’re not sure what to do. I probably should have tried to get by the lapped car a little sooner. I just wasted a little too much time trying to be cautious and Sheppy was just the better car. I feel like we had a good car. We just maybe needed a little something there late in the race there to help us get by. Maybe even just with lapped traffic playing out a little different.”

Once Sheppard grabbed the lead, he seemed to have clear sailing. But when Tim Lance of Brimfield, Ill., lost a wheel just as pulled into the infield on lap 98 — and the loose wheel rolled out onto the track in turns one and two — the fourth and final caution set up a two-lap, $5,000 shootout. Sheppard was masterful on the restart however and was challenged as he collected the win.

Feger hoped the final yellow would give him a shot at his first career Herald & Review 100 victory. But while he kept Babb behind him with ease, he couldn’t muster a run to challenge Shirley or Sheppard.

“I was just puttin’ around that bottom just holding my own, waiting, waiting, waiting for the right time and you know the cards just never played out right for me to make a challenge other than that last restart,” Feger said. “You know we were good, but we weren’t good enough to do that … to squeak by them on the bottom.

"Usually there’s a little more traction down there than there was tonight. There just wasn’t that much. Off of (turn) four I felt good, but off of (turn) two there really wasn’t much. But you know, third place … Brandon and Brian they’ve been as fast as anybody in the country right now. They’re both just running lights out. Just me running right with those guys, it feels good.”

Notes: Sheppard said he welcomed the final caution. “I was in heavy lapped traffic. I was happy to see that caution honestly because I was in heavy lapped traffic and I didn’t know how close Brian was getting to me there,” he said. … Sheppard was fortunate he made the starting call after transmission trouble early in the night. With no C-main, no intermission, no extra track prep and no driver introduction and only one support class, the program rolled along rapidly. Sheppard and his crew had to hustle to swap transmissions. “We had transmission problems in the heat race and we had to change it before the feature and we didn’t have a lot of time, but all the guys came together and made it happen for me. I didn’t have a lot of time to tune on the car, but I guess it paid off for me,” said Sheppard. … While only six cars finished on the lead lap, there were no drivers a single lap down. Finishing positions 7-9 were two laps down, while spots 10-11 were three laps behind. … Fourteen were still running at the finish. … The 22 starters represented five states: Illinois (16), Missouri (3), Ohio, Georgia and Mississippi. … Among drivers making their first Herald & Review 100 start, Trevor Gundaker of St. Charles, Mo., fared best as he rallied from 22nd to 10th.

Brandon Sheppard of New Berlin, Ill.. will start from the pole of the 40th Herald & Review 100 following a redraw of the three heat winners. Sheppard, who won the third heat, has 31 career Summer Nationals wins, but has never won the Herald & Review. Sheppard, who has nine starts in the 100-lapper, last started the race on 2017 when he finished third. He has five top-five finishes, with a pair of seconds (2011, ’13). … Brian Shirley of Chatham, Ill., a five-time winner this season, won this event in 2012. Shirley joins Shepherd on the row. He finished third in 2019. … First heat winner Shannon Babb of nearby Moweaqua, Ill., will start third. Babb has wonted to win the consolation race to make the feature. Weiss pushed while leading his heat on a restart and slipped back to sixth. ... Gordy Gundaker of St. Charles, Mo., still trying to get a handle on a car he recently purchased, nipped Weisser at the line in the heat to claim the transfer spot. … There are five former Herald & Review winners in the starting lineup, led by Babb, with five victories. Others are Kevin Weaver (four wins), Gundaker (two), Shirley and Dennis Erb Jr. … There are four first-time H&R starters in the field: Myles Moos, Trevor Gundaker, Blake Damery and Tim Lance Jr.

Macon Speedway hosts Thursday's 16th round of the DIRTcar Summer Nationals with a $5,000-to-win purse on the line at the 1/5-mile oval as the tour reaches the mid-point of a busy week. It’s the 40th Herald & Review 100, an event that has long been a tour staple and remains as the only 100-lap event on the slate.

Brian Shirley of Chatham, Ill., extended his series points lead with a thrilling victory over Brandon Shepppard of New Berlin, Ill., on Wednesday at Fairbury (Ill.) Speedway. Streaking toward his fourth Summer Nationals title, Shirley, who has five series wins this year, has a 134-point lead over Frank Heckenast Jr. of Frankfort, Ill. Heckenast and Jason Feger of Bloomington, Ill., are Shirley’s closest pursuers.

Shannon Babb, whose shop in Moweaqua, Ill., is only a 10-minute drive from Macon Speedway, is still looking for his first series win of 2020. The last season Babb went winless on the tour was 2016. With 98 career Summer Nationals wins, Babb’s pursuit of 100 continues Thursday in his back yard in an event he’s won five times.

Late Models will qualify and then run heats and consolations to set the starting lineup. Modifieds are on the card as well. Hot laps are set for 6 p.m.