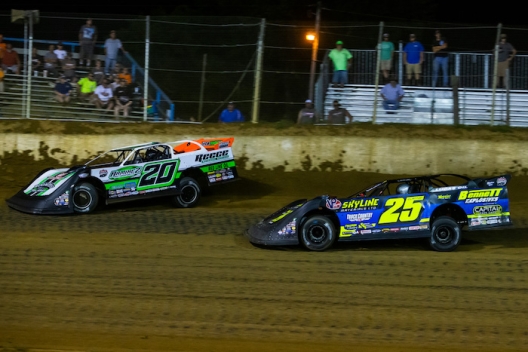 UNION, Ky. (Aug. 12) — A month after crashing while leading at Florence Speedway, Jimmy Owens got his redemption.

The second-starting Owens pulled away from the field through the first half of Wednesday’s 50-lap feature and later turned back Shane Clanton’s strong challenge following a lap-36 restart on his way to claiming his third Latham Memorial trophy.

Clanton settled for second after charging from the seventh starting spot to pressure Owens in the closing laps. He was followed by 14th-starting Ricky Weiss of Headingley, Manitoba, in third and 15th-starting Tim McCreadie of Watertown, N.Y., in fourth. Sixth-starting Hudson O’Neal of Martinsville, Ind., finished fifth in his first outing with PCC Motorsports.

Owens, who was in control of the Lucas Oil tour’s July 10 feature at Florence before a mechanical malfunction sent him hard into the turn-one wall on a lap-27 restart, recorded the 72nd Lucas Oil Series victory of his career with Wednesday’s victory and stretched his points leader over reigning series champion Jonathan Davenport of Blairsville, Ga., who was never a factor in finishing 14th.

“We had a really good car there the whole night. I knew those take off were gonna be difficult especially with everybody’s tires sealing off an everything, but we were able to capitalize and get back by,” said Owens who scored the 72nd Lucas Oil Series victory of his career. “It’s a great moral boost for the team and it’s an awesome feeling when you do bad one night and capitalize the next.”

Owens will look to use Wednesday’s victory as momentum heading into the next three days of racing at Florence. The track hosts another full program of Lucas Oil Series action during the $10,000-to-win Sunoco North-South Shootout on Thursday ahead of North-South 100 preliminary action on Friday and the $50,000-to-win main event on Saturday.

“We got good momentum going into the rest of the weekend and we got a good piece to work with,” Owens said of his Ramirez Motorsports Rocket Chassis. “We’ll critique it from here and maybe get a little better because tomorrow’s a different night, different day, different weather and probably a different racetrack.”

Racing during the North-South 100 weekend for the first time since 2012, Clanton almost made the most of the race’s first restart with 36 laps complete. He used a low-side charge to pull in front of Owens in turns one and two, but Owens used a strong run off the top of the corner to race back ahead down the back straightway.

We got a good restart and I was able to get by him, but I just didn’t get all the way to the top fast enough. Hat’s off to him. He had a good race car and drove back by me,” Clanton said. “We changed a lot of stuff on this car the past two weeks and it seems to be helping. Hopefully we can carry this momentum into tomorrow and the rest of the weekend. Hopefully we can one spot better the next two nights.”

Weiss, the 2018 North-South 100 winner, rallied forward from his 14th starting spot, but he couldn’t mount a late charge on Owens and Clanton and settled for third.

“I put the guys behind early in qualifying, but we were able to salvage a good night out of that. Coming from the back and finishing a top three, we’re happy with that,” Weiss said. “We got a good notebook here, and to be able to come from 17th to third in 50 laps just means we’re going forward. Hopefully we can maintain that pace and end up the winner again.”

The race ran green for 36 laps before debris brought out the first caution. Second-running Josh Richards of Shinnston, W. Va., and third-running Clanton made contact on the restart, sending Richards spinning in front of the field. Polesitter Devin Moran of Dresden, Ohio, Josh Rice of Verona, Ky., and Zack Dohm of Cross Lanes, W.Va., were all caught up with Richards in the resulting pileup.

The second caution appeared with four laps remaining when Bobby Pierce of Oakwood, Ill., slowed after charging from the tail of the field to sixth in a backup car.