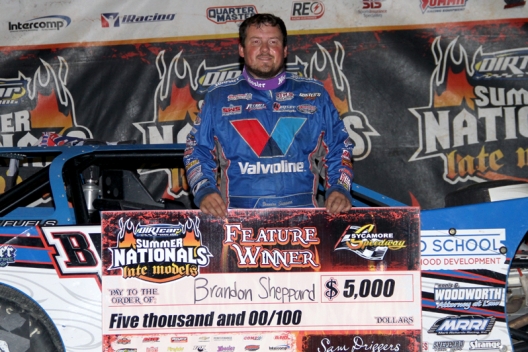 Make that four series stalwarts now and add a series title and 21 victories to those totals.

Brandon Sheppard, the 2013 series champion, joined Billy Moyer, Shannon Babb and Dennis Erb Jr., as a series winner at Sycamore on Tuesday as the New Berlin, Ill., driver picked up his 21st career Hell Tour victory and a $5,000 check.

Sheppard dominated the 40-lapper after taking the lead from polesitter Brian Shirley of Chatham, Ill., on lap five. He pulled away while working through lapped traffic midway through the caution-free affair and finished a comfortable 6.232 seconds ahead of fourth-starting Jeremiah Hurst of Dubuque, Iowa.

“(The car) was just so good. It was on a rail tonight for the feature,” said Sheppard. “I had to work my tail off on it all night long though. I kinda started off different from what I’ve been racing on the (Rocket Chassis) house car, just what I’ve been normally running on this car and we were just a little bit off.

“The racetrack’s a little bit different than what we’ve been good on this year with this car. We had to work on it all night long to get it to where it needed to be. Every change we did to it, I could tell a difference, even if it was just a minor change. Typical Rocket Chassis, you know, we were able to tune it right in and it was flawless in the feature there.”

The pole-starting Shirley finished third after leading the first four laps while fellow front-row starter Frank Heckenast Jr. of Frankfort, Ill., was fourth, one spot ahead of Jason Feger of Bloomington, Ill.

Sheppard started third in the main even after winning the third heat in front of Erb. He had to dig hard to get there though after starting fourth in the prelim. Once out front, however, whether it was the heat or the feature, Sheppard family-owned Rocket was dominant.

“I probably didn’t run the right line there qualifying really and got myself behind a little bit,” said Sheppard. “But we were able to get the heat race win and that’s definitely huge. My car was really good. I could run the top, middle, bottom or wherever I needed to go.

“That’s what was key tonight, was being able to maneuver and get through lapped traffic and run the top there even when the bottom was a little more dominant.”

Sheppard, who only runs a handful of events each season in equipment backed by his grandfather and father while moonlighting from his day job as the Rocket Chassis house car chauffeur, was happy to be able to put the family’s machine in victory lane.

Hurst stuck to the extreme low side as he moved from fourth to second. He had to wait patiently to get by Shirley and by the time he did. Sheppard was long gone.

“We made some changes there right before the feature and it felt like I could race pretty much anywhere,” said Hurst, who recorded his career-best Summer Nationals finish. “I knew if Shirley stayed up there (near the top of the track) and I just kept picking away at the bottom I could probably get him. He stayed up there a little too long, so I got him.

Admitting he couldn’t see Sheppard once he got to second, Hurst said he would have welcomed a late caution.

Shirley led four laps but after Sheppard stuck his nose beneath him to grab the lead as they completed lap five, he realized he didn’t quite have enough to stick with the new leader.

“Sheppy was really the one that I felt like we needed to figure out a little something to be a little better,” said Shirley, who notched his best finish at Sycamore in the four series events. “My track record is pretty good up to the feature here. I just got to do a better job of figuring out how to be a little tighter and a little bit better off the corner. I as a little nervous starting on the front row because I felt like I wasn’t the best car, but I felt like if I got out there I might be able to (stay out front).

“Obviously Sheppy got by me on the bottom and then I felt like I hung with him for a long time, but he was the best car. He could go around and pass them guys right in the middle. He could roll through that middle really well. What can you say, he’s one of the best guys in the country. We’re gonna learn from him and try and move on a get better for (Wednesday).”

Notes: Sheppard won his first Summer Nationals race in more than a year. His last tour win came June 28, 2019 at Terra Haute (Ind.) Action Track in a race co-sanctioned by the World of Outlaws Morton Buildings Late Model Series. … Eighteen of the 22 starters were running at the finish, with 10 completed 40 laps. … With 14 series events complete, Shirley has four wins while Tyler Erb of New Waverly, Texas, and Pierce of Oakwood, Ill., have two apiece.

After the three heat winners redrew, Brian Shirley will start from the pole of the 40-lap main event. The Summer Nationals points leader is looking to improve upon his best tour finish at Sycamore, fourth in 2018. Last season Shirley rallied from 13th to finish fifth, while in 2017 his third-place starting position netted a 19th-place finish after suffering a flat while battling in the top three on lap 21. … Bouncing back from a sub-par (by his standards) qualifying effort that left him fourth in the third group, Brandon Sheppard rolled the outside to win his heat. Sheppard got around the low-running Dennis Erb Jr. and pulled away to win by 1.664 seconds. ... Shirley turned back Rich Bell’s early high-side charge to win the second heat. Bell grabbed the lead on lap two, but subsequently smacked the wall exiting turn four, allowing Shirley to drive back under him. Shirley won the heat by 2.629 seconds while Bell held on to finish second. … Frank Heckenast Jr. won an uneventful first heat, slipping by polesitter and overall fast qualifier Jeremiah Hurst early and cruising the a 2.180-second victory. … Travis Denning was scheduled to start 11th, but after getting into the wall in his heat, he discovered a broken axle tube and decided to scratch from the main event. … Lyle Zanker was in line to receive a provisional starting spot, but decided to scratch when he discovered metal shavings in the fuel filter of his No. 9z. … With Zanker unable to go, Jason Papich took his starting spot. Tim Lance Jr., Titus Sneed and Mike Mataragas gained entry via provisional, as did Herb Reich, who was a late addition to the starting grid.

Making great use of a great draw, Jeremiah Hurst of Dubuque, Iowa, was the overall fast qualifier among Tuesday’s 29 entires. Hurst, the first to take the track, stopped the clock at 14.397 seconds to earn the pole position in the first heat. Frank Heckanast Jr. of Frankfort, Ill., will start alongside Hurst in the first heat. Brian Shirley (14.714 seconds) of Chatham, Ill., was the quick qualifier in the second group and will start first in the second heat, with Rich Bell of Sheffield, Ill., to his immediate left. Dennis Erb Jr. (14.929) of Carpentersville, Ill., was the quickest in the third group. He’ll start from the pole of the third heat, with Bob Gardner of East Peoria, Ill., joining him on the front row.

Brian Shirley of Chatham, Ill., leads the DIRTcar Summer Nationals into its second leg, which gets started Tuesday at Sycamore Speedway, about 50 miles west of Chicago. The fairgrounds oval with its shady pit area host just its third Summer Nationals event.

The tour, which has been on hiatus for 12 days — that includes a July 30 rainout at Peoria (Ill.) Speedway and Monday’s rainout at the Bullring at Rock Island County Fairgrounds in East Moline, Ill. — looks to regain its footing with six consecutive races before its next scheduled day off.

The Super Late Model program starts with 6 p.m. hot laps followed by group time trials broken down by three scheduled heat races. There will also be a consolation race to help set the 22-car starting grid. Joining the Late Models are 11 modifieds and 16 vintage cars.