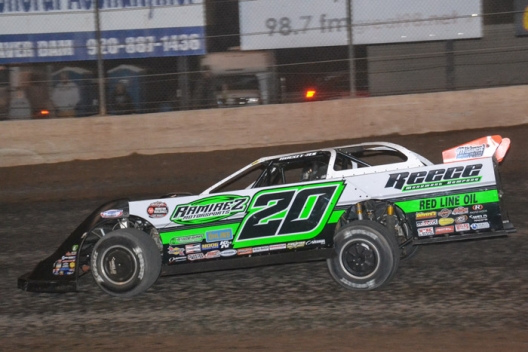 The trip was anything but, though, as the Newport, Tenn., driver avoided near-disaster just past halfway when a slower car ran him toward the infield while trying to pull off the track.

The lap-27 yellow erased a three-second lead for Owens, but his Ramirez Motorsports Rocket Chassis was no worse for the wear in the second half of the 50-lapper as he built a lead of more than five seconds in cruising to his fourth WoO victory of the season and 19th of his career.

The pole-starting Owens, who earned $10,000 in the weeknight affair while moonlighting from the Lucas Oil Late Model Dirt Series, took the lead on Cade Dillard’s lap-11 miscue and took the checkers 3.572 seconds ahead of Hall of Famer Billy Moyer of Batesville, Ark. Dillard, who led the first 10 laps before slipping over the turn-four cushion and brushing the wall, was third. Eighth-starting Brian Shirley of Chatham, Ill., and Kyle Bronson of Brandon, Fla., rounded out the top five finishers in the tour’s first trip to Beaver Dam since 2009.

The high-running Dillard led Owens in the early laps, but his turn-four mistake allowed Owens to grab a lead he’d never give up. His victory was only in doubt just past halfway when Brett Swedberg attempted to steer his slower car into the infield  after exiting turn four.

Working underneath Swedberg, Owens suddenly had nowhere to go and Swedberg’s left-hand turn briefly dragged the leader toward the infield as swell. Owens got on the brakes and kept control of his car, barely maintaining the lead over Moyer was the caution appeared.

But any hopes that Owens had any damage immediately vanished as he again pulled away from the field, leading by more than a full straightaway with 10 laps remaining as Moyer and Dillard mixed it up in a feisty battle for the second spot.

“The car was just really, really flawless all night long,” Owens said. “There was just enough moisture up there in (turns) one and two to give you a good grip and scotch your car up real good where you could cut back across the corner. (Turns) three and four, we could run the middle, bottom, we were really maneuverable there. This Ramirez Rocket is rolling really good right now.

“I’ve just got a lot of good chemistry between all the guys and we’re all working good together and looking forward to the next race.”

Moyer, who took the second spot from Dillard on the 15th lap, never seriously challenged Owens but also never got completely clear of Dillard.

“We’ll take (second). We was having a good race back there if Jimmy wasn’t out there stinking it up for us. He did a great job,” Moyer said. “We’re making some gains. We’ve just got a little more to go.

“The banking is kind of different (on opposite sides of the track), it falls away over there, but it had a little bit of grip way out there, so if you did it just right it was pretty good. We didn’t have our balance on the car real good. We were close. We’ll take it and go on.”

Dillard’s car didn’t perform as well as he’d hoped after he jumped into the early lead from outside the front row.

“Something after that (early) restart I didn’t get going nearly as good, and wasn’t as good after that in general,” Dillard said. “I just didn’t (make the right changes) I don’t feel like. Just to be (on the podium) again, I’ll take it. To be racing with people like Jimmy Owens and Billy Moyer, that’s pretty cool in general, I’ve watched those guys for a long time. It’s an honor to be out here with ’em.

“We’ve got a consistent car right now. I’ve just gotta start going the right way with (changes). I felt like I knew what I needed but didn’t do it. Either way, it would’ve been really hard to outrun Jimmy there."

The feature was slowed by four cautions, the most serious for the near-calamity for Owens.

Besides the Owens-Swedberg scrape on lap 27, Swedberg and Brent Larson spun for a lap-three caution and Mike Marlar stopped in turn four for a lap-16 yellow (Darrell Lanigan had left-rear suspension problems simultaneously and both retired). On lap 17, Rick Eckert pulled pitside with a flat left-rear tire and some right-rear body damage.

Notes: Owens won three in a row with the World of Outlaws during Florida Speedweeks at Volusia Speedway Park in Barberville, Fla. … Ryan Gustin of Marshalltown, Iowa, was running fourth with two laps remaining when he slowed and retired before completing 50 laps. … Third-place finisher Dillard had previously finished second at Beaver Dam on Aug. 31, 2018, in the George and Russ Scheffler Memorial won by Scott James. … Series points leader Brandon Sheppard had no brakes time-trialing and started 11th in the feature; he improved five positions and finished sixth, his first time out of the top five in WoO competition since June 27. ... Many of the same drivers will head to New Richmond, Wis., for Cedar Lake Speedway’s Aug. 6-8 USA Nationals, a weekend culminating with a $50,000-to-win finale.