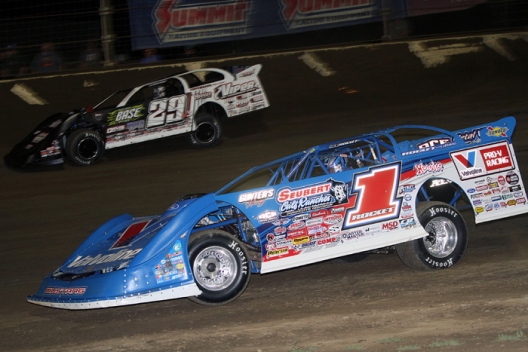 Preliminary action for the the inaugural event was held Friday with Jimmy Owens of Newport, Tenn., and Brandon Sheppard of New Berlin, Ill., each scoring $2,500 qualifying feature victories. The finale was originally planned for Saturday evening before wet weather force officials to move the program to Sunday.

With drizzle and light rain continuing to fall at 6 p.m., event and series officials were forced to abandon their attempts to beat Saturday’s wet weather and postponed the finale of the Hoosier Dirt Shootout to Sunday.

Gates will open at 12 noon and hot laps are scheduled to begin at 2 p.m. on Sunday. The program will resume with the Late Model B-main followed by the UMP modified last-chance races, 75-lap WoO feature and 40-lap UMP modified A-main.

The steady, day-long showers that were originally predicted for Saturday largely stayed away after some early-morning downpours muddied parts of the pit area, but officials’ attempts to start hot laps earlier at 4:30 p.m. were hampered by continued drizzle/mist that wasn’t showing up on radar. Practice sessions for both Late Models and UMP modifieds were eventually completed by 5:30 p.m. and the Late Model B-main was sent onto the track at 5:41 p.m., though very light drizzle was still falling and creating potential vision problems for the drivers. … A scramble on the opening lap of the consolation caused Derek Chandler to execute a rollover between turns three and four. He wasn’t injured — though his car sustained frame damage — and after the clean up officials pulled the field off the track due to the continued drizzle. … Ricky Thornton Jr. picked the pole position for the 75-lap Hoosier Dirt Shootout in the redraw conducted at the WoO control trailer. Friday qualifying feature winners Brandon Sheppard and Jimmy Owens will start third and fifth, respectively. … Steve Casebolt opted to head home following Friday’s action and didn’t return to run Saturday’s last-chance races. … After retiring from Friday’s second qualifying feature, McKay Wenger was able to make repairs thanks to his supporters — a group of friends led by Mark Stephens collected the approximately $600 needed for a new driveshaft and a buddy brought him a transmission from the team’s shop in Fairbury, Ill., to replace the broken piece. … Allen Murray, the Texan who fields the car Rick Eckert is driving this weekend and in other special events, traveled to Kokomo to make his first start since February’s Winternationals at East Bay Raceway Park in Gibsonton, Fla., but never turned a competitive lap. A busted oil-pump belt during hot laps on Friday forced him to scratch for the evening and he didn’t even hot lap on Saturday before returning to his pit stall and shortly thereafter leaving the track while Eckert remained to race.

With Saturday's weather forecasts calling for an increasing chance of heavier rain later in the day, event officials announced Saturday morning that the start of the racing program will be moved up in an effort to beat the precipitation. Spectator gates will now open at 3 p.m. with hot laps now scheduled to begin at 4:30 p.m.

Owens scored a flag-to-flag victory in the first 25-lapper, while Sheppard overtook Darrell Lanigan of Union, Ky., for the lead on lap four of the nightcap and wasn’t challenged for the remainder of the distance. Both drivers earned $2,500 for their efforts will redraw with the second- and third-place finishers for the first six starting spots in the finale.

The first preliminary was dominated by the 48-year-old Owens, who bolted off the outside pole at the initial green flag to assume command over front-row mate Shane Clanton of Zebulon, Ga., and never looked back. The Lucas Oil Late Model Dirt Series points leader pulled away following restarts on laps 11 and 21 and beat Clanton to the checkered flag by 0.856 of a second.

“The car was really, really on kill tonight,” said Owens, whose only previous appearance at the quarter-mile bullring was a runner-up finish in last September’s Lucas Oil Series event. “We didn’t have to go nowhere but the high side … the cushion was there and I didn’t really know where we needed to be, but we was able to cruise around through there and really not tear nothing up.

“The more we fired off, the car just kept getting better and better the whole race,” he added. “It worked out great. We’re in the pill draw for tomorrow so maybe we can keep it rolling.”

Cade Dillard of Robeline, La., advanced from the sixth starting spot to third by lap four and finished in the show position. Jason Feger of Bloomington, Ill., placed fourth after regaining the spot on lap 23 from Kyle Bronson of Brandon, Fla., who settled for a fifth-place finish.

Also among the eight transfers to Saturday’s headliner were Bobby Pierce of Oakwood, Ill., and Hall of Famers Scott Bloomquist of Mooresburg, Tenn., and Billy Moyer of Batesville, Ark.

Sheppard, 27, captured the second qualifying feature in equally convincing fashion after vaulting his Rocket Chassis house car from third to first in four circuits. After watching most of the first prelim’s field run the outside lane, he put his car on the inside of the track as soon as the race commenced and used the lane to glide by Lanigan for the top spot and run away from the pack.

Ricky Thornton Jr. of Chandler, Ariz., grabbed second from Lanigan for the final time on lap 17 but never threatened Sheppard while racing to a runner-up finish, 1.675 seconds behind the victor.

“They kept working on the track all night long and the top finally slowed down there,” said Sheppard, the WoO points leader making his first career start at Kokomo. “I could roll the top pretty good too, but my car just worked right off the bat on the bottom so I just stayed there. I didn’t see no reason to go knock the deck out until somebody was getting ready to try and pass me.

Chase Junghans of Manhattan, Kan., ran the outside to reach third place on lap 18 and finished in the position. Tyler Erb of New Waverly, Texas, shot from sixth to fourth on lap 19 and finished there while Mike Marlar of Winfield, Tenn., completed the top five after following Erb for the final six circuits.

Lanigan faded to sixth in the final rundown after leading laps 1-3. Daryn Klein of Fairview Heights, Ill., and 15th-starter Dennis Erb Jr. of Carpentersville, Ill., rounded out the transfers in a race slowed by caution flags on laps 10 and 21.

Both qualifying features were briefly red-flagged after cautions were thrown because a portion of the catch fence on the outside of turns one and two was torn up by a passing car and pulled onto the racing surface. The track crew made fence repairs on lap 21 of the first qualifier and lap 10 of the nightcap.

Saturday’s program will include a last-chance race and the 75-lap A-main.