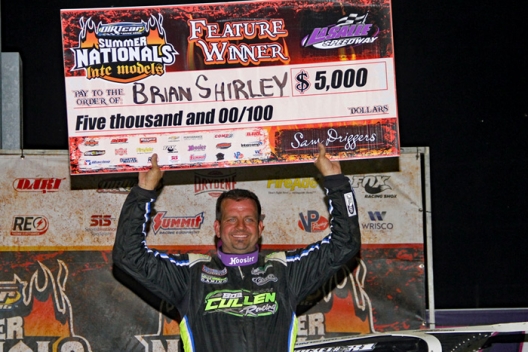 La SALLE, Ill. — Brian Shirley is on one of the hottest streaks of his DIRTcar Summer Nationals career, but the 39-year-old Chatham, Ill., driver knows better than to take anything for granted.

Even with Wednesday’s flag-to-flag 40-lap victory at La Salle Speedway, his third in four races on the series as the three-time and defending champion stretched his 2020 points lead, Shirley was just glad to be in victory lane one more time.

“Listen, this sport’s very humbling,” Shirley said after taking the checkers 3.234 seconds ahead of Tyler Erb. “You can be good one night and be horrible the next. So we’re just going to do the best we can do and takes it as it comes.”

The competition was among the toughest on the series with Lucas Oil Late Model Dirt Series regulars Erb and Kyle Bronson entering the event, along with World of Outlaws Morton Buildings Late Model Series drivers Boom Briggs and Dennis Erb Jr.

But Shirley tries to maintain the same focus any time he gets in his Bob Cullen Motorsports car.

“To be honest, every race we go to, whether it’s Summer Nationals, World of Outlaws, heck, (even) a local $1,500-to-win race … every race is as tough as can be. Any more, the competition is tough,” he said. "It doesn’t matter who comes in, where you go, what you do, it’s just super tough. All in all we just try to wake up every day, do the be job we can do as a team and prepare the car the best we can and just come to the race and do what the good Lord gives us.”

Shirley was indeed blessed at La Salle with a $5,000 paycheck in collecting his 30th career series victory, surviving a few tense moments amid traffic but never allowing his competitors with threaten.

Erb, the New Waverly, Texas, driver who was a $15,000 winner at La Salle last season, slightly narrowed Shirley’s full straightaway lead late in the race but settled for second with unrelated Dennis Erb Jr. of Carpentersville, Ill., in third. Shannon Babb of Moweaqua, Ill., who held the second spot the first 23 laps before Tyler Erb took it, was fourth with Chase Junghans of Manhattan, Kan., rounding out the top five.

Shirley outjumped fellow front-row starter Boom Briggs at the outset and quickly pulled away from Babb, entering traffic after just a half-dozen laps.

When Bob Gardner spun in two two just a head of Tim Lance, who Shirley was about the lap, Shirley quickly steering to the right to avoid calamity for what would be the race long caution.

Shirley led Babb, Briggs, Dennis Erb and Tyler Erb back to the green and again pulled away, cruising at the halfway point with a cushion of three lapped cars protecting him from Babb, who was 2.844 seconds behind.

A few laps later, Shirley put himself in a precarious position while lapping Rich Bell and Mike Spatola — right between the slower cars in turn two — but muscled past while further back, Tyler Erb was grabbing second.

Shirley maintained a healthy cushion of lapped cars and stretched his lead to 3.5 seconds on lap 30. With the leader facing traffic, Erb made up some ground and cut the margin to 1.9 seconds with eight laps remaining, but Shirley again edged away to avoid any late-race dramatics.

Notes: Shirley also won the tour’s previous visit to La Salle in 2018. … He’s the fourth winningest racer in series history after moving past Scott Bloomquist (28 victories) last week. … La Salle hosted its first event in more than a year after the Izzo family abruptly closed the track, but Tony Izzo Jr. said there are non-specific plans for more racing in 2020 after the “helluva turnout” impressed him in the grandstand. “I'm happier that all of them can be with us, with the support we're getting,” he said. “And as long as we keep getting support, we'll keep racing.” … If nothing else, La Salle will likely run events for the MARS Racing Series he now owns and operates, he said. …. The event marked the series return of three-time tour champion Bobby Pierce of Oakwood, Ill., who stepped away from the tour to run Lucas Oil Late Model Dirt Series events at I-80 Speedway in Greenwood, Neb.; he finished a lap down in 10th. … Boom Briggs of Bear Lake., Pa., won a heat race and finished eighth on his 49th birthday.

The biggest change drivers notice about La Salle? The turn-three exit is gone. That means no blunt end of the wall to strike, like Billy Moyer memorably did in the previous Summer Nationals race in 2018, escaping injury but destroying a race car. DirtonDirt.com talked to promoter Tony Izzo Jr. and drivers about the change in a story expected for Thursday. … Brian Shirley drew the pole in a redraw of heat winners with Boom Briggs alongside; Shannon Babb and Tyler Erb are in the second row. … Provisional starters are Tim Lance and Tim Lance Jr. (series), Kevin Weaver (last season’s DIRTcar points) and Rich Bell (track provisional). … Allen Weisser crossed the line third in the first heat, but he was light at the scales and disqualified; he scratched from the consolation. ... In heat action, the high side was fast but tricky with some drivers having a few tense moments, including, Chase Junghans when he got nearly sideways exiting turn four while chasing third-heat winner Tyler Erb. … Rich Bell got too high exiting turn four in the final heat and got into the frontstretch wall, limping off the track with right-front damage. … Kyle Bronson was running second in the second heat when he lost power on the backstretch with a puff of smoke; he was pushed to the pits. … Matt Weistart had a similar demise earlier in the heat. … In the final heat, Bobby Pierce and Taylor Scheffler had a feisty battle for the second spot behind winner Shannon Babb with Pierce finally getting the spot.