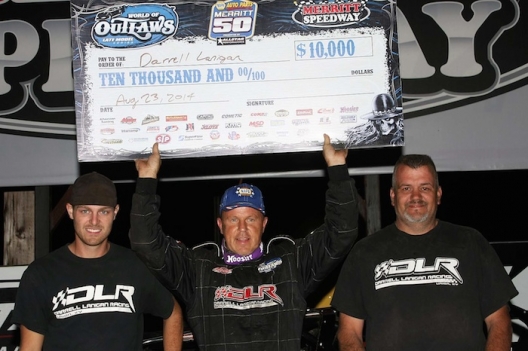 MERRITT, Mich. (Aug. 23) Darrell Lanigan of Union, Ky., topped a back-and-forth battle with Brady Smith of Solon Springs, Wis., midway through Saturday's NAPA Merritt 50 at Merritt Speedway and pulled away in the closing laps to earn his series-leading 13th World of Outlaws victory of the season.

The 44-year-old Lanigan, a two-time series champion and current points leader, earned $10,650 for his series-leading 66th career WoO victory and his first at Merritt's 3/8-mile oval.

"We went a little different (on tire selection) and I knew we would be better on the long run," said Lanigan, who moved within two victories of his record 15-win mark set in 2012. "I was just biding my time and once my stuff came in it was like a rocket ship."

Smith settled for second, fading to 4.925 seconds behind Lanigan at the finish, while home-track driver Dona Marcoullier of Haughton Lake, Mich., made a late charge to finish third. Former tour champion Rick Eckert or York, Pa., was fourth with Clint Smith of Senoia, Ga., who led the first four laps from the outside pole, rounding out the top five in a race slowed by four cautions.

Dropping back to second on the start, the polesitting Lanigan pressured Clint Smith through the first three laps before pulling ahead on lap four. Lanigan pulled away on three early restarts before 10th-starting Brady Smith reeled him just before lap 15.

Smith first took a look to the outside of Lanigan on the 15th lap, and was alongside the leader the following circuit. The two cars battle side by side over the next four laps before Smith pulled ahead just before the final caution waved with 19 laps complete.

Smith eased away from Lanigan after the restart, but Lanigan was soon making his bid to retake the point. Lanigan took advantage when Smith attempted to drive around a slower car on lap 30, dropping to the inside lane to make a three-wide pass for the lead on the back straightaway.

Once back in command, Lanigan's Club 29 Race Car drove away from Smith and had only to avoid trouble in traffic to secure the victory. That was no simple task, however, as slower cars ran two and three wide ahead of him. But he skillfully handled the congestion, passing cars two at time on more than one occasion.

"There was a couple times I snuck in there and was like 'Oh my God this is gonna get tight,' " Lanigan said of his run through traffic during the final 20 laps. "But we got enough room to get through and had an unbelievable car."

Recovering from mechanical issues that forced him out after just one lap of Friday's WoO LMS A-Main at I-96 Speedway in Lake Odessa, Mich., Brady Smith settled for the runner-up finish in his Big Red Motorsports Rocket Chassis. The solid result marked the 37-year-old standout's fifth top-five finish in 15 WoO starts this season.

"He had a little different tire selection than we did," said Smith, whose highlights in part-time WoO competition this season include a victory during Florida Speedweeks action in February. "Ours was good early, but his was good at the end.

"I was trying to pace myself. We started 10th and I knew we went soft on (right-rear tire). I was trying not to murder the thing early, but I was pretty much the only car running the top of guys in front of me. I just went for it and tried to hold on.”