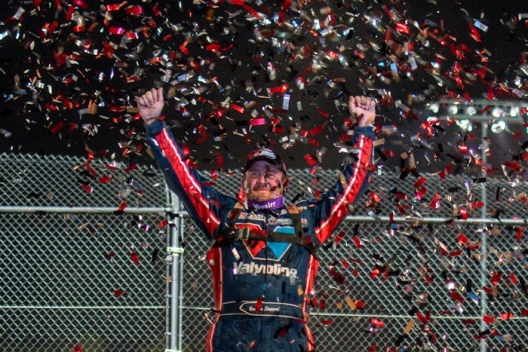 PLYMOUTH, Wis. (July 11) — Brandon Sheppard has found a home away from home at Plymouth Dirt Track.

“This place has really treated me good,” Sheppard matter-of-factly said after remaining undefeated at the track, which has hosted the WoO tour in each of the last three years and had B-Shepp emerge triumphant every time.

Sheppard, 27, of New Berlin, Ill., assumed command on lap 12 after race-long pacesetter Cade Dillard of Robeline, La., was forced to pit with a flat left-front tire and never looked back. The defending WoO champion brushed off a brief threat from Jimmy Mars of Menomonie, Wis., while working lapped traffic to take the $10,000 top prize by 3.318 seconds over the home-state standout.

Another Badger State racer, Justin Ritchie of New London, Wis., crossed the finish line close behind Mars in third place to join two distinguished Dirt Late Model stars on the race’s podium. But Ritchie’s car failed the post-race deck height check, bringing him a three-position penalty that moved him back to sixth in the final rundown — still a career-best WoO finish and worth a $500 bonus for being the highest-finishing driver who has never won a WoO feature and isn’t a series regular.

Ritchie’s demotion moved Chase Junghans of Manhattan, Kan., to third in the finishing order. Ricky Weiss of Headingley, Manitoba, was elevated to a fourth-place finish and Scott Bloomquist of Mooresburg, Tenn., completed the top five.

Finishing behind Ritchie was Taylor Scheffler of Waukesha, Wis., whose seventh-place finish was a career-best in WoO competition. Ashton Winger of Hampton, Ga., finished eighth after climbing as high as fifth on lap 13 from the 16th starting spot.

Sheppard’s victory was his third straight and eighth of 2020 on the WoO circuit. It was also his 10th career WoO win in Wisconsin, moving him ahead of Batesville, Ark.’s Billy Moyer as the series’s all-time winningest driver in the state.

“I’ve got a little theory: Wherever corn grows good, we’re gonna have a good race,” Sheppard joked when asked about his success in Wisconsin. “But seriously, we all really look forward to coming up here. This trip north to Wisconsin and then our Western swing, that’s my favorite part of the whole year. We usually get around these tracks really good and they aren’t scared to work on them and give us a good racy place.”

Sheppard swept the evening’s program by following fast-time honors and a heat win with his 63rd career WoO A-main score, but it appeared that Dillard was going to make it tough for B-Shepp to extend his streaks. Dillard started from the pole position and jumped out to the race’s early lead over Sheppard, who quickly shot forward from the fourth starting spot in Mark Richards’s Rocket Chassis house car.

Dillard and Sheppard were battling through lapped traffic on lap 10 when Dillard came together on the homestretch with Brent Larson of Lake Elmo, Minn. The contact bent the left-front bodywork on Dillard’s MB Customs car and cut its left-front tire, forcing him to pit for a new shoe when a caution flag flew on lap 11.

“I was pressuring him pretty hard there and he knew he had to go,” Sheppard said of challenging Dillard. “There was a lane for a minute, but then Larson went all the way out to the wall when Cade was trying to stick it in there and he got that flat left front. I hated to see that. Cade and I race so well together; he’s a clean racer and we had a good race going there. I was hanging right with him on the bottom over in turns one and two … I think we could’ve had a great race together.”

With the 29-year-old Dillard’s hopes effectively ended — he returned but could only climb back to a 12th-place finish — Sheppard exerted control over the field for the remaining distance. Mars drew close in lapped traffic just after the halfway point, but the race’s second and final caution flag on lap 29 for Jason Rauen of Farley, Iowa, who slowed with rear suspension trouble, gave Sheppard clear track and he was never seriously threatened again.

“It got a little sketchy tonight because the bottom in turns three and four wasn’t as good as I thought and it got really black slick, then the top came in,” Sheppard said. “It got pretty treacherous at times, but our car was super manueverable and I could put it wherever I wanted.”

The 48-year-old Mars ran second behind Sheppard from lap 12 to the finish, but he nearly lost the spot in the final circuits. On lap 44 he traded sliders with Junghans, and on lap 48 he raced three-wide through turns one and two with Junghans and the 10th-starting Ritchey, who was making up ground fast running the inside of the track.

Mars was satisfied with his runner-up placing.

“Congratulations to Brandon … he did a good job,” Mars said of Sheppard. “One of these days we’ll get another one of these, but second to him, I guess that’s nothing to snooze at either.”