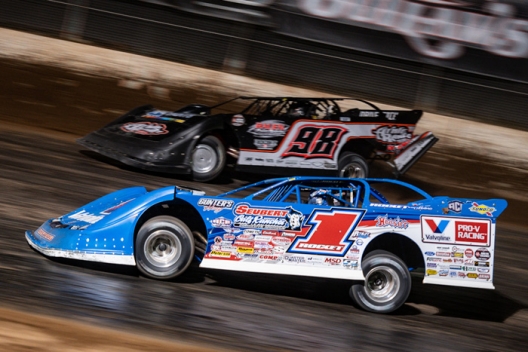 SEYMOUR, Wis. (July 10) — Brandon Sheppard is becoming very fond of racing in the state of Wisconsin.

The 27-year-old superstar from New Berlin, Ill., continued his run of success in the Badger State on Friday night, marching forward from the fifth starting spot to capture the 50-lap World of Outlaws Morton Buildings Late Model Series at Outagamie Speedway.

Sheppard overtook Jason Rauen of Farley, Iowa, for the lead on lap 33 and never looked back en route to his tour-leading seventh victory of 2020 and the 62nd of his career. The $10,000 triumph also marked his eighth WoO checkered flag earned at a Wisconsin track over the past four years, including two in the past six days.

“We’ve got a great crowd here and had a great track to race on,” said Sheppard, who recorded his second straight WoO win in Mark Richards’s Rocket Chassis house car, backing up a victory on July 4 at Cedar Lake Speedway in New Richmond, Wis. “It doesn't get much better than this.”

Sheppard secured the win by 0.688 of a second over Darrell Lanigan of Union, Ky., who maintained the runner-up spot in his Viper Motorsports-backed Barry Wright house car for the final eight circuits but couldn’t seriously challenge the victor. The 50-year-old Lanigan took over second on lap 42 after Rauen, who led laps 5-13 and 15-32, spun from contention in turn four while battling with the three-time WoO champion.

Nick Anvelink of Navarino, Wis., recorded a career-best WoO finish of third, advancing forward from the seventh starting spot. Ricky Weiss of Headingley, Manitoba, placed fourth after starting 12th and Rodney Sanders of Happy, Texas, completed the top five driving a MB Customs car as a teammate to Jimmy Mars of Menomonie, Wis., who was an early retiree.

Sheppard was the fourth different leader of the competitive A-main, which saw Dennis Erb Jr. of Carpentersville, Ill. (lap one) and Ashton Winger of Hampton, Ga. (laps 2-4, 14) also spend time at the front of the pack. Erb faded to a 10th-place finish while Winger’s bid for his second career WoO win just one week after earning his first at Cedar Lake effectively ended on lap 14 when he spun in turn four from contact with Rauen as they raced through lapped traffic.

“I was little worried in the heats when it was bottom dominant, but the track crew stayed right with it and gave us a really racey track for the feature,” Sheppard said. “That was a lot of fun.”

Outdueling Rauen for the lead wasn’t an easy task for Sheppard, however.

“I was trying to give him plenty of room, but man he wanted to run into me real bad there," Sheppard said of his battle with Rauen, who drove a new Capital Race Car. “I don't really know what was going on there. We could roll the middle real well through turns and one two though, and that’s when we were able to get underneath him.

“I’m not sure what happened with him and Ashton, but I would’ve really like to race with (Winger) for another win (like the two did in Winger’s milestone triumph on July 3 at Cedar Lake).”

Sheppard added Outagamie to his list of Wisconsin tracks where he’s won WoO events. He also has been victorious at Cedar Lake (twice in 2018, once in '13 and this year), Plymouth Dirt Track (’18, ’19), Ashland’s ABC Raceway (’19) and Oshkosh Speedzone Raceway (’17).

Lanigan started third but slipped as far back as sixth early in the race before rallying to match his best WoO finish of 2020. He always was a runner-up on Feb. 12 at Volusia Speedway Park in Barberville, Fla.

“We just needed to get through all that lapped traffic to be able to do anything more,” Lanigan said. “It was just so hard to pass in all that traffic.

“All in all, we had a great car. We’ve all been working so hard lately and this turnaround we’ve been on (five straight top-10 finishes) has been awesome.”

Anvelink’s third-place finish was well received by his home-state crowd. He heard plenty of cheers from the track’s covered grandstand when he appeared during the post-race ceremonies.

“Anytime you can go forward against the World of Outlaws, it’s a good night,” said Anvelink, a three-time champion of the DiscountShopTowels.com Dirt Kings Tour that co-sanctioned the race. “I thought we’d be able to get up there and race with those guys for a win, but we just didn’t take off on that last restart like we had been.

“This has me real excited for tomorrow (the WoO event at Plymouth Dirt Track). Plymouth has never been all that kind to me, but hopefully this setup will give us a good starting spot. Qualifying is everything with these guys, so if we can turn a good lap maybe we'll have a chance to go for another win tomorrow night.”

Before the caution flags for Winger and Rauen, Jake Timm of Winona, Minn., caused the race’s first slowdown on lap four when he stopped in turn four.