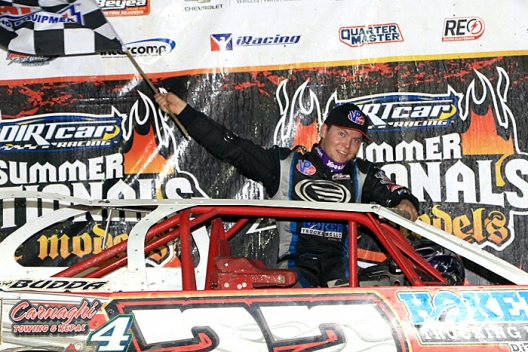 GRANITE CITY, Ill. — Front-row starters Johnny Scott and Ryan Unzicker mixed it up in a tight showdown in the first half of Friday’s 40-lap DIRTcar Summer Nationals event at Tri-City Speedway, swapping the lead and swapping grooves.

But lurking just behind the lead duo was Bobby Pierce of Oakwood, Ill., who spoiled the Scott-Unzicker battle by catching the frontrunners and eventually sweeping around Unzicker exiting turn two on the 22nd lap and pulling away for a $10,000 victory.

“We got past that one lapped car and (Unzicker) got back down,” said the three-time series champ Pierce, the series leader after two points races. “I was like, ’Well, we need to get around him right now before he moves back up.’ Luckily we pulled it off.”

Pierce took the checkers 3.769 seconds ahead of Unzicker, the El Paso, Ill., driver who led laps 1-10 and 14-21 at the 3/8-mile oval near St. Louis, Mo. Rick Eckert of York, Pa., drove Texan Allen Murray’s car to a third-place finish while Chris Simpson of Oxford, Iowa, and Brian Shirley of Chatham, Ill., rounded out the top five.

Scott, of Las Cruces, N.M., retired on lap 23 with nosepiece damage after clipping a turn-three tire barrier while 14th-starting Shannon Babb of Moweaqua, Ill., rallied to fourth but retired on lap 35 with engine woes.

Pierce, who started fifth, was glad he didn’t run into much trouble on a tricky surface.

“The lapped cars were just so hard to pass. You didn’t know where they were going,” Pierce said. “Luckily we got by him without tearing anything up. After the checkers, actually, the left side kind of got bent in a little bit from a lapped car, but that’s partially my fault. I kind of pulled in a little late.”

Unzicker was pleased with his runner-up performance.

“My team’s tickled to death. Obviously we (are) a little disappointed, but you can’t bow your head to finish second to Bobby on the cushion,” Unzicker said. “I mean, he’s one of the best in the country on the cushion. When I seen him drive by me on the outside when I was flirted around the bottom and the middle, then I moved my line up there, it didn’t feel too bad, but he’s got just a lot more balls than I do, I guess.

“I was just having to drive that thing really aggressive. But we put on a heckuva good show for the whole 40 (laps). … I can’t be more proud of my crew.”

A single yellow slowed the action. The first start was scrapped when Gordy Gundaker and Frank Heckenast Jr., ended up facing the wrong direction between turns three and fourth.

Notes: The feature ended about 10 p.m. … Pierce’s 26th career series victory ties him with Brian Shirley of Chatham, Ill., for fifth on the all-time list. … Frank Heckenast Jr. pitted after the first-lap caution but he rallied to finish eighth and earn hard charger honors. … A dozen driver completed 40 laps. … Billy Moyer of Batesville, Ark., gained four spots to finish sixth after he lost a heat race for mistaking the white flag for the checkered.

With a new 11 p.m. curfew, the Late Model feature was ready to roll before 9:45 p.m. ... Johnny Scott is on the pole for the 40-lapper after his victory in the fourth heat. … Prelims were eventful, if nothing else, with Tyler Carpenter involved in a couple of scrapes and several drivers mistaking the white flag for the checkered in a heat race, causing some havoc. … Billy Moyer was leading the second heat after nine laps and abruptly slowed, believe he’d seen the checkers. But Chris Simpson blew by for the victory while Moyer recovered to finish third behind Rodney Melvin, who was fourth at the white. Frank Heckenast Jr. was running third and pulled to the infield to go to the scales where he found out he was scored sixth (“That ruined my night,” he said, taking a provisional in the feature). … Shannon Babb, who was fourth in the bizarre heat, said it’s always difficult to see the flagger at twilight and he made the same mistake himself in 2012. … Rodney Melvin admittedly ran Tyler Carpenter up into wall in turns three and four in the second heat after Melvin said Carpenter got into him early in the race. … In the B-main, Carpenter was in the middle of another mess while trying to overtake Tim Manville, triggered a turn-three pileup. … Also in prelims Gordy Gundaker broke a driveshaft running fifth in the third heat and was forced to take a provisional for the feature. … Derek Fetter got into the turn-three wall in his heat.