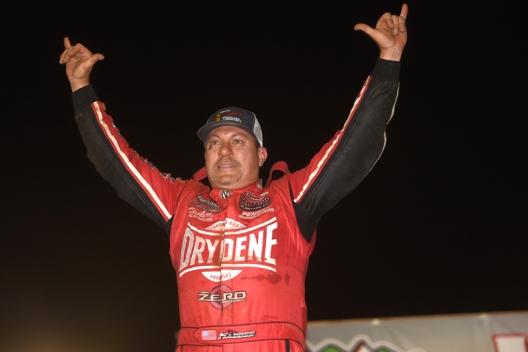 Finishing 0.686 of second ahead of runner-up Dale McDowell of Chickamauga, Ga., Madden earned $10,053 for his 25th career Southern Nationals triumph and first victory with the Ray Cook-promoted series since an Aug. 1, 2014 victory at Smoky Mountain.

Madden hadn’t entered a Southern Nationals race in 2,169 days, but the five-time series champion looked right at home on the tour he dominated from 2007 to 2014. And once he got accustomed to Millwood’s Rocket Chassis, he looked right at home at Smoky Mountain as well. Madden added a third career Southern Nationals victory at Smoky Mountain — he’s the tour’s only repeat winner there — to his other Smoky Mountain conquests, which include a 2018 World of Outlaws victory and four career Southern All Stars wins at the 4/10-mile speedplant.

“It’s a fun place to race,” said Madden. “The line changes around on it throughout the night. It’s just a great place to race and we just love coming here racing. It’s big, it’s fast and I just like it.”

As much as he enjoys Smoky Mountain,  Madden admitted it that it took awhile to get a feel for his new ride.

“When we first started tonight I was really quite uncomfortable,” he said. “But man this thing really tuned in nice. We made the right adjustment there. Starting early tonight we made some adjustments and went too far, so we had to back up some. We run over something and tore the nose up on it (in the feature). One of those cars, something fell off of it, a hunk of lead or something. I kinda lost my aero right there, but before that, man we had an awesome race car.”

Once in the lead, Madden rode comfortably ahead of McDowell, who stayed close but just out of striking distance after moving around Bailes for second. Ninth-starting Cory Hedgecock of Loudon, Tenn., marched forward to finish third, while reigning series champion Brandon Overton of Evans, Ga., rallied from 17th to finish fourth after having transmission trouble in prelims. Bailes slipped to fifth after leading the first eight laps.

Madden, who started fifth, was in second by lap two and quickly began to challenge Bailes for the lead. He tried both the bottom and the top before finally sailing around the leader on the outside as the pair raced off of turn four.

“I rode there for a little while trying to feel my car out ‘cause I’ve never been in one of these (Rocket XR1 chassis) and I didn’t know what to expect,” Madden said. “I moved around a little bit on the racetrack and felt it out then I just wanted to make a charge and get to the front pretty quick after that. So we bolted on a charge there and I took the lead.

“I didn’t know how many restarts we was gonna have. Sometimes you chose the wrong line on a restart and you might come out running third instead of second even though you was running second before the restart if you pick the wrong line or don’t get started good. I wanted to be in the lead so if we did have some more restarts I could be out front by myself. So I figured it was time to go.”

Third-starting McDowell said that when Madden slipped by him for second as he was chasing Bailes, it was likely a race-winning pass. He was correct.

“Early in the race I was going to try to pass Ross there and (Bailes) chose at that point and time to run the bottom and when he did it took the air off of me and I went up across the racetrack and Chris got under me, and I thought ‘Dadgummitt I bet that was the race.’ And it was,” said McDowell. “But at that point and time you didn’t know. You didn’t know where to run and Ross got to protecting the bottom and Chris got by him.

“The racetrack was kind of … you had to hunt your traction tonight. Good race. It should’ve been good for the fans.”

Hedgecock, who has five wins on the season and entered Friday’s event fresh off a $5,000 Schaeffer’s Iron-Man Series victory at Volunteer Speedway in Bulls Gap, Tenn., was happy he was able to move forward and happy to finish behind Madden and McDowell.

“Had a good car and everything … just glad we finally got (to third),” said Hedgecock. “We was pretty fast. We’ll take it. Third place against two bad dudes right there. We’ll take it everyday. We’ll go to (Wythe Speedway Saturday) and we’ll keep firing off at these things. We’ve got a bad hot rod right now.”

“It’s great,” Madden said. “I’m just happy that Mike (Millwood) gave us the opportunity … Drydene and Millwood Plumbing and Henderson Amusement, just everybody that’s part of this program .. to give us an opportunity to go and race. They called me and wanted to know if I wanted to go have some fun and I said, ‘Sure I want to have fun’ … and that’s what we’re doing.”

Notes: Thirteen of the 23 starters were running at the finish, with eight completing 53 laps. … Madden’s other Southern Nationals victory at Smoky Mountain Speedway was on July 26, 2013. … The race was slowed by just two cautions, both on lap two. The most serious was a slow rollover by David Payne of Murphy, N.C., who emerged unscathed from the turn two incident, but was unclear how much damage was inflicted upon his the brand new Capital Race Car he was debuting. … The Schaeffer’s Southern Nationals kicked off its 16th season. … It was the first time the series has opened up at Smoky Mountain.

Reigning series champion Brandon Overton of Evans, Ga., was scheduled to start on the outside front row of the first heat but gave up the spot because of transmission problems in his Wells & Sons Motorsports Longhorn Chassis. He started last in the first consolation race and won it to grab the 17th starting spot in the 53 lap feature. … Overall fast qualifier Ross Bailes of Clover, S.C., steered the Big Frog Motorsports ride to a victory in the first heat, topping Chris Madden, who is making his debut in a Millwood Plumbing-backed Rocket XR1. … Dale McDowell of Chickamauga, Ga., beat Michael Chilton to the line by a scant 0.435 of a second to win the second heat. McDowell and Chilton had to navigate around the slower machine of Craig Greer as they raced down the front stretch to the checkered flag. … A couple cautions slowed the third heat before Chris Ferguson of Mount Holly, N.C., prevailed in flag-to-flag fashion. … Pearson Lee Williams had a solo spin on the opening lap of the fourth heat at had to tag the rear, forgoing his pole starting position. The Dublin, Ga., youngster rallied back to finish fifth in the heat won by fellow Georgian Tyler Millwood. Williams finished second in his consolation race to crack the 22-car starting field. … Greer and Trent Ivey will start the main event from the 11th row as series provisionals based on the 2019 standings. ... G.R. Smith will start 23rd by virtue of an emergency provisional.

Ross Bailes lost the scoring transponder off his Big Frog Motorsports machine when he took his initial qualifying laps for Friday’s Schaeffer’s Southern Nationals event at Smoky Mountain Speedway. No worries. Bailes, of Clover, S.C., made another qualifying run — the last car to take the track among the 35 entries — and set the overall fast time while earning the pole position for the night’s first heat race with a mark of 17.104 seconds. Donald McIntosh of Dawsonville, Ga., was second quick in the first group and will start from the pole of the second heat. In Group B, Chris Ferguson of Mount Holly, N.C., stopped the clock at 17.162 seconds to top 17 cars in the group and earn the pole for the third heat. Pearson Lee Williams of Dublin, Ga., was second fast in Group B at 17.312 and will start first in the fourth heat.

Smoky Mountain Speedway hosts the opening round of the Schaeffer’s Southern Nationals, kicking off the tour’s 12-race slate crisscrossing through four states over a 16-day stretch. The series is making its sixth visit to the 4/10-mile oval on the western edge of the Great Smoky Mountains National Park.

Chris Madden of Gray Court, S.C., who has teamed with Georgian Tyler Millwood for a run at his sixth Southern Nationals championship, is a two-time series winner here. Reigning series champion Brandon Overton of Evans, Ga.; Randy Weaver of Crossville, Tenn.; and Mike Marlar of Winfield, Tenn., have one series victory each at Smoky Mountain.