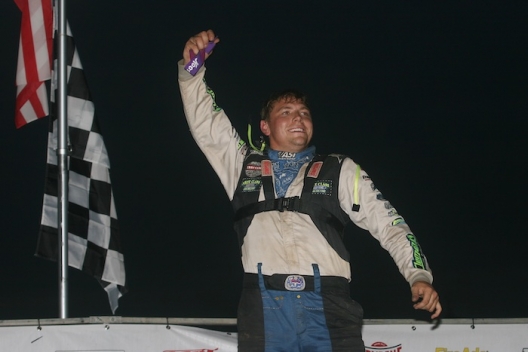 BROWNSTOWN, Ind. — Three-time DIRTcar Summer Nationals opener Bobby Pierce turned back one restart challenge from one national touring regular in Wednesday’s tour opener at Brownstown Speedway. He couldn’t do it a second time.

After Pierce fought off Kyle Bronson following a lap-22 restart, pole-starting Tyler Erb turned up the heat on the leader after a lap-31 restart and overtook the high-running Pierce with four laps remaining for a $5,000 victory in the 40-lap Hoosier Dirt Classic at the quarter-mile oval in southern Indiana.

“I knew I wasn’t very good running around the top like Bobby was, so I was better off to kind of float in the middle,” Erb said. “I finally figured out how to (exit) turn four with a little bit of a speed. … I was waiting for Bobby to move down. I honestly thought he might try to block.

“I think he just had his momentum built up so much there he couldn’t do it, and I just kept working him and working him. I didn’t see him (exiting turn) two, I believe, and I got pretty clear and I sailed her pretty hard into (turns) three and four and never saw him.”

Pierce, the three-time Summer Nationals champion from Oakwood, Ill., finished a half-straightaway behind in settling for second while Mike Marlar of Winfield, Tenn., last year’s series winner at Brownstown, was third. Ninth-starting Allen Weisser of Peoria, Ill., was fourth and Bronson, of Brandon Fla., slipped back to fifth at the finish.

“I knew what tire (Erb) had on and he kinda beat us in the tire game a little bit there,” Pierce said. “We were really fast the first half of the race, and halfway through, I started not being able to pass the lapped cars — and I wasn’t even catching the lapped cars that were ahead of me. I knew if a caution came out we were kinda screwed.”

Pierce cruised early from outside the front row, leading by a half-straightaway through the first half of the race with Erb giving chase. After a lap-22 slowdown when Brian Shirley broke a rear end, Bronson grabbed second from Erb and repeatedly worked the inside of Pierce exiting turns two and four.

Pierce eventually fended off the charge before the race’s second and final caution appeared on lap 31 when Chad Stapleton slowed in turn three.

On this restart, Erb got the better of Bronson and — like his fellow Lucas Oil regular — immediately began pressuring the high-running Pierce. It appeared Pierce might be able to keep Erb in check, but exiting turn two on lap 37, Erb slipped ahead for a lead he’d never give up.

Notes: Tyler Erb recorded his second career Summer Nationals win; his previous came on June 25, 2017, at Tri-State Speedway in Haubstadt, Ind. … The feature ended about 9:20 p.m. … Devin Gilpin of Columbus, Ind., a $5,500 winner Saturday in Brownstown’s Born Free 40, qualified poorly and never got into contention. A slower car forced him over the turn-one banking and he retired shortly thereafter. … Tim Lance of Brimfield, Ill., broke a rod in his engine in prelims and fielded his son Tim Lance Jr.’s car in the main event.

Tyler Erb got the pole in the redraw among heat winners. Bobby Pierce started outside the front row with Tyler Carpenter third. … Track workers went to work on the surface after prelims to get the track ready for the 40-lap feature. ... The hub-hugging Carpenter’s last-lap pass exiting turn four on a high-running Mike Marlar in the third heat spiced prelims. While the cars didn’t make contact just before the checkers, Marlar slid over the frontstretch banking and into the concrete, suffering mostly sheetmetal damage. “I survived,” said Marlar, who wasn’t pleased with Carpenter’s move. “I’ll be back out there in a few minutes.” … Carpenter nearly spun in turn two earlier in the prelim because the drainplug had partially screwed out of the oilpan, causing oil to coat his car’s tires. He adjusted his driving style and caught Marlar on the last lap in his Brownstown debut. “I pulled a slider on him,” Carpenter said excitedly, noting the cars didn’t touch. … Jason Jameson was fourth in the second heat after a dazzling fifth-to-heat move and high side charge. He was dueling Frank Heckenast Jr. for third on the last lap when he pulled up, mistaking the white flag for the checkered. He thought he confused a move-over flag for the white previously and was disappointed his high-side charge didn’t carry him all the way to the front. “I think I could’ve gotten all of ’em,” he said. … Ryan Gustin started outside the front row in the second heat but lost a few spots then did a 360-degree spin in turn two that left him with a sixth-place finish. … Jason Feger also challenged in the third heat but slipped over the turn-three banking and dropping back to finish sixth. … Chad Stapleton of Edinburgh, Ind., broke a driveshaft in attempting to time trial and wasn’t able to make repairs before his heat race. … Tim Lance Jr., the 21-year-old son of Illinois veteran Tim Lance, made his first career Super Late Model start.

Brownstown drew one of the season's biggest car counts on the series last year, but about half that number entered this year's opener when weather threatened. ... Light rain throughout the mid-afternoon clearly scared off many teams. "If you were on the radar, it didn't look good at all," series director Sam Driggers said. ... While it thundered and lightning nearby, heavier storms in southern Indiana missed the track and the pits were still dusty by the time the delayed drivers' meeting started about 5:45 p.m. ... Several drivers arrived after 5 p.m., including first-year series entrant Tyler Carpenter, who parked deep in the pits. ... Mike Marlar of Winfield, Tenn., last year's series winner at Brownstown, has raced infrequently in 2020 but is among 22 drivers in the field. ... With just 22 cars, every entrant will start the feature. Drivers will be split into three groups for hot laps, time trials and heat races with the starting field set up heat finishes (minus a redraw among heat winners for the top three spots).