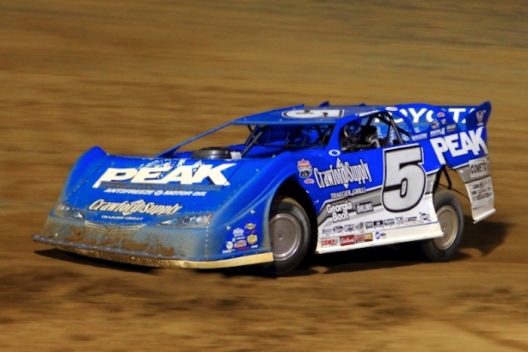 LAWRENCEBURG, Ind. (Aug. 23) — Don O’Neal’s triumphant return to his home state of Indiana couldn’t have come at a better time.

With a $10,000 victory in Saturday night’s Whiskey City 50 at Lawrenceburg Speedway, the 50-year-old driver from Martinsville, Ind., thrust himself squarely back in contention for his first-ever Lucas Oil Late Model Dirt Series championship.

O’Neal entered the weekend’s two-race Lucas Oil Series swing — a twinbill that began Thursday night at Volunteer Speedway in Bulls Gap, Tenn., — trailing Jimmy Owens of Newport, Tenn., by a healthy 145 points in the national tour’s standings. But after following a sixth-place finish at Volunteer with his sixth Lucas Oil win of 2014, O’Neal ended Saturday looking at just a 40-point deficit to Owens, the three-time and defending series titlist who experienced a rare off weekend with finishes of 15th at Volunteer and sixth at Lawrenceburg.

O’Neal scored his first Lucas Oil win since July 11 at Tri-City Speedway in Pontoon Beach, Ill. He held a 40-point lead over Owens after that checkered flag.

The win also was a happy return to Lawrenceburg for O’Neal, who sat out last year’s Lucas Oil Series event at the track because he was recovering from injuries he suffered in a crash.

“We had a pretty good car last week at Batesville (Topless 100), led a lot of laps, but finished fifth,” O’Neal said. “Then Thursday night (at Volunteer), we wound up sixth. We took last night off and the crew went over everything on the car. It handled really well tonight from start to finish. I am real proud of everyone with the CBR (Clint Bowyer Racing) team.

O’Neal, who started fifth, grabbed the lead on lap four from his Clint Bowyer Racing teammate, Steve Francis of Ashland, Ky., and never looked in a race that was run under a threat of approaching rain. He cruised to his 39th career Lucas Oil victory, beating Francis to the finish line by nearly a full straightaway.

“The car was on a rail tonight, no doubt,” said O’Neal. “Clint’s going to be real happy with this one-two finish here tonight.”

O’Neal’s quick burst to the front of the pack was the deciding factor in the race. Once he overtook Francis for the lead following a lap-three restart — the only restart of the rapidly-run race — he dominated the action.

“We started fifth and the bottom was working real well there early on,” O’Neal said. “I had a few moments there in (lapped) traffic, but everybody gave each other plenty of room. I didn’t know how far Steve (Francis) was behind me … I was just concentrating on the traffic ahead.”

Francis, who was victorious in Lawrenceburg’s Lucas Oil Series event a year ago, was extremely satisfied with his second-place finish. The 46-year-old driver didn’t have quite enough speed to outduel his teammate.

“We hit one of those whoop-dee-doos (in the surface) down there and I guess it bent a float in the carburetor,” Francis said. “When Don found that (line where he would) go in on the top and turn back across the bottom, I’d do it and it would stumble for a second, get a push and I’d end up missing the bottom.

“We just kept trying to find a different line than he was in, hoping maybe he’d zig when we needed to zag in lapped traffic. That was really our only option. He made a heck of a move to get to the lead on that restart, and from there we kind of just played follow-him-around.

“Good day for Bowyer Racing,” Francis added. “Congratulations to Don and all his guys.”

Bloomquist, 50, chased the CBR teammates through the distance, settling for a podium performance.

“Another third place finish — what else can I say,” said Bloomquist, who was the night’s overall fastest qualifier. “Don always runs well here. I think I had something for Steve, but he got away from me in traffic and I lost sight of him.”

Notes: The program was hustled along to beat inclement weather approaching the area. The feature went green about 8:30 p.m and took just under 16 minutes to complete. ... The only caution flag of the feature came on lap three when Mike Marlar of Winfield, Tenn., and Jason Papich of Nipomo, Calif., got together on the frontstretch. Marlar spun to draw the race's lone yellow flag and retired with right-side damage. … Only eight drivers finished on the lead lap, but 20 were running at the finish. ... Kent Robinson of Bloomington, Ind., retired after 21 laps. ... Lawrenceburg, an open-wheel racing stronghold, hosted a rare Late Model event.