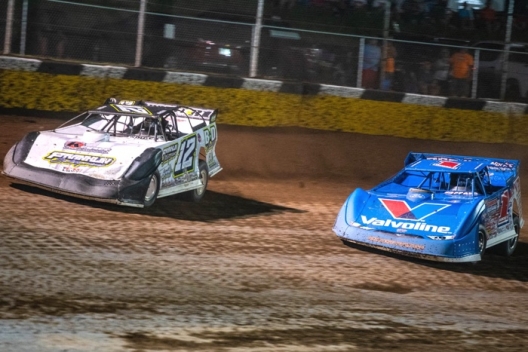 NEW RICHMOND, Wis. (July 3) — Ashton Winger knows that to be the man you have to beat the man. On Friday night, at least, the rising 20-year-old from Hampton, Ga., did just that.

Turning back a furious late-race challenge from the sublime Brandon Sheppard of New Berlin, Ill., Winger completed a flag-to-flag run to his first-ever Word of Outlaws Morton Buildings Late Model Series victory in the 40-lap feature at Cedar Lake Speedway.

Beating the reigning WoO champion by 0.623 of a second in a caution-free event for a career-high $20,000 paycheck left Winger in a postrace state of ecstacy.

“Gosh, this is so awesome man,” Winger said in victory lane after raucously celebrating on the roof of his Billy Franklin-owned XR1 Rocket car. “I’m so thankful. This is all I’ve ever wanted to do. I never wanted to go to NASCAR. I never wanted to do anything like that. I always wanted to be at the top level of Dirt Late Model racing and here we are.”

A WoO rookie who entered the weekend at the 3/8-mile oval with four top-10 finishes in his last five series starts, Winger took advantage of his pole starting spot to lead the entire distance. But he had to survive the stiff bid offered by Sheppard, who piloted his Rocket Chassis house car from the sixth starting spot to second by lap 16 and relentlessly chased Winger throughout the race’s second half.

Sheppard, 27, threw a slider on Winger rounding turns one and two on lap 37 and was ahead racing down the backstretch, but Winger refused to give up. The youngster responded with a slider of his own at the other end of the track, regained command off turn four and kept Sheppard at arm’s length for the final two circuits.

Ricky Weiss of Headingley, Manitoba, who lost a $3,000 victory in the previous night’s Elimination Showdown event due to a three-position penalty for his Bloomquist Race Car failing a post-race deck-height check, rebounded to finish third. He started in the same position and raced within striking distance of the leaders over the final laps as he snapped a streak of seven straight WoO starts without a top-five finish.

Dennis Erb Jr. of Carpentersville, Ill., advanced from the ninth starting spot in his XR1 Rocket to finish fourth. He grabbed the position on the last lap from Darrell Lanigan of Union, Ky., who slipped to fifth in the finishing order after starting from the outside pole and running second for the first 15 laps in his Viper Motorsports-backed Barry Wright house car.

Winger couldn’t have been more satisfied with the circumstances of his breakthrough national touring series triumph. He took his buddy Sheppard’s best shot and held on.

“I seen him get to second there with 20 to go and I knew he was on a different tire,” Winger said. “I really tried early to ride but I didn’t do a very good job of that, and then I really did all I know how to do when we got to lapped traffic and that’s attack them guys and try to put as much distance between me and him as possible.

“(Sheppard) kept showing me a nose in (turns) one and two. I felt like one and two was where he was gonna beat me because I didn’t know where to be and I got to moving around a lot there.

“He slid me (on lap 37), and I had a pretty good idea of how he got a run on me because I thought I was getting through three and four about as well as I could through the holes in the bottom and I figured if he slid he had to have gotten a run off the top. I just went down (into turn three) and tried my best to slide him and clear him. I actually bottomed out and pushed all the way across the racetrack and I don’t know if that hurt or helped me, and then I just tried to circle that top for the last two laps. I didn’t even look up until the checker.”

Noting that “the hardest one to get is the first one,” Winger relished joining the select group of WoO winners.

“I don’t know if I’ve ever screamed that loud after I’ve won race before,” said Winger, who joined Weiss, Ricky Thornton Jr. and Zack Mitchell as first-time WoO A-main winners in 2020. “This is what we’ve always worked for. Racing with guys like Josh (Richards) and Sheppy and Scott (Bloomquist) and (Shannon) Babb … you know, just all the big names. And now I feel like we’re starting to slowly put our name in the mix there.

“My mom (Lynn), my dad (GW Performance shock guru Gary Winger), Billy Franklin, (crewman) Colbey (Richman), (crew chief) Todd Pruitt … everybody who’s ever turned a wrench on any of my race cars since I was 9 years old, this is all for them.”

Sheppard couldn’t quite complete the pass that would have denied his pal a career-first victory.

“We were in the right position,” said Sheppard, who extended his WoO points lead. “I just didn’t do a few things right there. We got ahead of him (on lap 37) … in one and two I slid him and got up there to the cushion, and he got a run back on me down the back straightaway and was able to slip past me again and then he got in the right line. I needed a few more laps to be able to get my speed back up to do something with him.”

The two-time WoO titlist offered his congratulations to Winger.

“They did a really good job,” Sheppard said. “He’s been working hard and beating up-and-down the road with us, so he deserves it. It was huge getting my first World of Outlaws win, and I know it’s probably huge for him, too. He keeps getting better every week.”

The 31-year-old Weiss, meanwhile, wasn’t far off the leaders’ pace as he righted his recent doldrums.

Weiss also hailed Winger’s performance — and added a quip about a hauler mishap the previous night that left Winger hobbling with a sore left foot.

“Just awesome for Ashton to be able to get his first win. Maybe I should go rip a cabinet off the wall and drop it on my foot,” Weiss said with a smile.