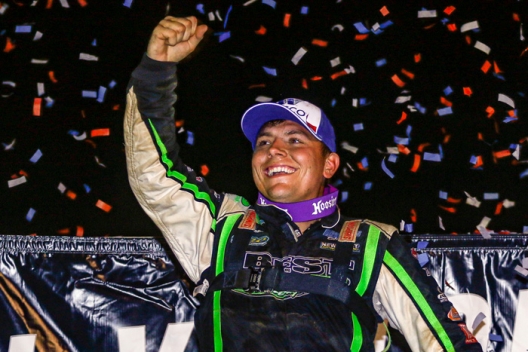 ZANESVILLE, Ohio — Tyler Erb had made plenty of laps at Muskingum County Speedway. When visiting his buddy Devin Moran, whose family operates the 4/10-mile oval, Erb had a relatively liberal estimate of how many circuits he's made: 10 million.

But Friday's circuits on the Lucas Oil Late Model Dirt Series for the Independence 50 were the New Waverly, Texas, driver's first competitive laps at Muskingum County, and he proved all that practice paid off.

Overtaking polesitter and race-long leader Jonathan Davenport with seven laps remaining, Erb captured his first Lucas Oil Series victory of the season and $12,000 as the hometown racer Moran chased him to the finish. The 23-year-old Erb's victory snapped the four-race winning streak for series points leader Jimmy Owens of Newport, Tenn., who rallied from 17th to sixth after a heat-race mishap.

Erb, who survived a dash to the finish after a lap-48 caution for Micheal Norris, made some new fans immediately after the race by venturing inside the spectator gates and slapping high-fives with spectators in celebrating his victory for Ohio-based Best Performance Motorsports.

Moran finished 1.808 seconds back with Blairsville, Ga.’s Davenport setting for third in trying to end a month-long drought on the circuit. Tyler Carpenter of Parkersburg, W.Va., was fourth for his best-ever series performance and Hudson O'Neal of Martinsville, Ind., earned his first top-five finish of the season.

Davenport was in control most of the feature, but late-race traffic played havoc with the frontrunners and Erb took advantage as Davenport slipped from first to third on the 44th lap.

"I want to thank all of my crew. This deal is tough. It's not easy," said Erb, who moved up two positions in the point standings to second behind Owens. "In all honestly, I think we have had a better year as far as being consistent than last year. We are going to keep digging, we want to get that orange spoiler (to signify the series points leader) before the end of the year

"This is almost one of my home tracks, I've stayed with Devin several times. I have made many laps here with (Hall of Famer) Donnie (Moran) to help me get better, but this is the first time I have turned competitive laps here. It seems like I've made 10 million laps here. I just want to thank the Moran family for everything they have done for me. ... This is just awesome."

Moran, whose first career Lucas Oil victory came at his family's track in 2013, was pleased with a runner-up finish behind his buddy.

"I was kind of hoping J.D. and Tyler would get into each other. I was going to roll around the top or diamond off the corner," Moran said. "Congrats to Tyler. He's been like my brother for like the last four years. He's never raced here, but people don't realize he's made a lot more laps than a lot of those other guys here tonight. I thought I might have had a chance with that last caution, but he was so much better on the restarts."

"When I got to those couple of lapped cars, they moved up to the top where I was running which was the fast line to be in," he said. "Even so, we had a really good car tonight. I think it's the best finish we have ever had here, so we will take it and move on to Portsmouth tomorrow night."

Notes: Erb's eighth career Lucas Oil victory was his first since Sept. 20, 2019, at Kokomo (Ind.) Speedway. ... Erb is the 13th Lucas Oil winner in 14 series visits to the track; only Scott Bloomquist has won twice. ... Jimmy Owens of Newport, Tenn., set fast time, but he slipped over the berm in his heat race and settled for fifth, forcing him to transfer through a consolation race. … Kyle Bronson of Brandon, Fla., earned Optima Batteries Hard Charger honors for his 22nd-to-10th run. ... Tyler Carpenter turned the quickest lap during the feature (16.750 seconds). ... Drivers failing to transfer to the feature: Lance Elson, Reid Millard, Matt Lux, Jerry Aber, Kevin Smith, Rod Conley and Dustin Smith.