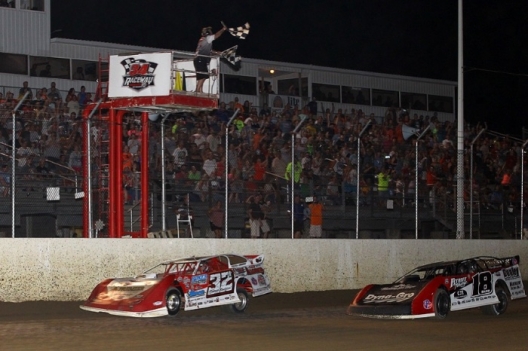 WEST BURLINGTON, Iowa — It’s a good sign when you win a race so much you can’t remember exactly how many times you've won it.

Such as it is for Bobby Pierce of Oakwood, Ill., who fought off a last-ditch charge from Shannon Babb on Friday at 34 Raceway to capture the 12th annual Slocum 50 on the Lucas Oil Midwest LateModel Racing Association.

“It feels great to get another one,” Pierce said in victory lane. “Is this four?”

When told indeed it was his fourth $10,555 victory in the annual event, he had a one-word answer: “Sweet.”

Inheriting the lead when Tony Jackson Jr. of Lebanon, Mo., lost fire with four laps remaining, Pierce led the rest of the way, taking the checkers 0.131 seconds — about one car length — ahead of Moweaqua, Ill.’s Babb in the holiday weekend special. Pierce also won the race in 2014, ’16 and last season.

“I’m out of breath because I was so nervous,” Pierce said in victory lane. "Shannon was really good on those restarts. I was (good) on the longer runs … I was pretty nervous. I knew it was going to be close ever since I got into third.

Babb’s runner-up finish came ahead of three Iowans: polesitter Brian Birkhofer of Muscatine, Jeremiah Hurst of Dubuque and 11th-starting Chris Simpson of Oxford. Jackson, who grabbed the lead from Babb on the fourth lap, retired in 15th after leading 43 laps at the 3/8-mile eastern Iowa oval.

Pierce started fourth but didn’t make up a single spot until the 13th lap, then he was mired in third behind Jackson and Babb through the race’s middle stages.

“I started reeling those guys in,” said Pierce, who along with Babb struggled to put a lap on Tony Toste after Jackson’s daring move under the slower car on lap 22. “Normally, when you catch a guy, you catch him a lot, but I felt like I was catching him just a nose at a time every lap. It was very frustrating because I like to get going, get to the lead quick and not wait until the every end. We made it exciting, that’s for sure.”

Indeed it was exciting when the lap-46 caution for Jackson set up a duel between the Illinois drivers. As Pierce got a good jump and tried to pull away, Babb threw his car into the corners high in turns three and four, a repeatedly tried to drive underneath Pierce entering turn one, one time bailing out and sending his car skittering up the banking. He regained the ground for one last shot at Pierce but fell short at the checkers.

“I gotta thank (Babb) for racing me clean into (turn) one. I know he hauled in there and kind of widened out my line a little bit,” Pierce said. “He could’ve went in there and doored me and he didn’t. Maybe if it was for a lot more money to win, he probably would’ve — I probably would, too. But big thanks to him for racing me clean into turn one. We’re going to be racing a lot against each other and it’s cool to have a great race like that.”

Babb looked back to lap 30 when Pierce overtook him for the second spot as a pivotal moment.

“I got into lapped traffic and couldn’t get by a couple of guys, allowed Bobby to get by me. He was really good,” he said. “We got down to the very end and I just did everything I could to get back by him. He was really good. He got the job done and got the win.”

Birkhofer, calling his car “a work in progress," regretted his choice of suspension setup but was glad to have a front-row seat for the final duel.

“We changed some stuff a little bit for the feature, and obviously, I wished I could have pulled in right away and changed it back,” he said. “But we held on. Probably should’ve ran fourth if (Jackson) didn’t have his problem. But I had a blast watching (Babb and Pierce).

“That’s two tremendous race car drivers. They put on a good show. I’m just glad for all the fans, we got to see some good fans here and put on a good race. Hey, top-three, I’ll definitely take it."

Besides the late caution for Jackson, two other yellow flags slowed the race, both for single-car issues. Chad Holladay spun in turn four on the eighth lap and Brian Shirley slowed on the track shortly after being lapped on lap 41.

Notes: Before his demise, Jackson was in line for his first career five-figure victory. ... Mitch McGrath had problems with his car in prelims and took a provisional starting spot for the feature in Jordan Yaggy’s car. … Payton Looney of Republic, Mo., drew a first-lap caution in the opening heat and had to restart on the tail. … Jonathan Brauns spun in the second heat for an early yellow. … Brauns was among drivers failing to make the feature along with Yaggy, Skip Frey, Brennon Willard, Spencer Diercks, Myles Moos, Jay Johnson, Brandon Queen, Justin Duty, Rich Bell and Mark Burgtorf.