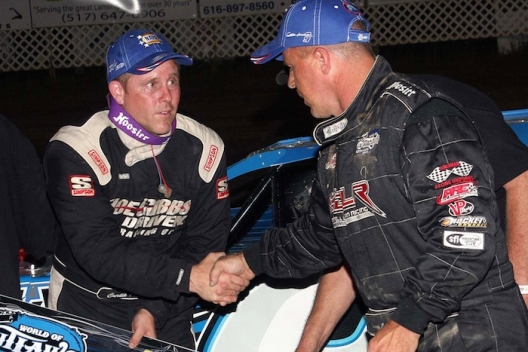 A regional racer for more than 20 years, Roberts, 47, of Coleman, Mich., took the lead when Shane Clanton of Zebulon, Ga., suffered a flat right-rear tire on lap 42 of the NAPA Lake Odessa 50 and held off a furious charge by Darrell Lanigan of Union, Ky., through the race's finale eight laps to claim his first career World of Outlaws Late Model Series victory.

Roberts earned and career-high $10,550 for his breakthrough victory and thrilled a large crowd of his home-state fans as the 3/8-mile oval hosted the national tour first time since 2007.

"I've been racing a lot of years and this is definitely my biggest win," said Roberts, who became the fourth first-time winner on the series this season. "To come in here and beat these guys — the best drivers in the country — it's a dream come true. This is really just unbelievable.”

Surrounded by a pack of WoO stars, Roberts turned in the performance of his life. Starting from the pole, Roberts slipped into second behind Clanton on the race's opening lap and turned back challenges from series veteran Chub Frank of Bear Lake, Pa., through the first half of the 50-lapper.

After pulling away from Frank after the halfway point, Roberts appeared to be headed for a runner-up result until Clanton's demise put him out front. Roberts continued his impressive performance by holding off Lanigan in a tense battle that saw the two-time series champion and current points leader pull even with Roberts with a hard charge into the final turn.

"I could hear (Lanigan)," Roberts said. "I didn't know for sure who it was, I just said, 'Hey, keep hitting your marks, you've been doing good the whole race. Just keep it up. Don't mess up.' "

Just as he had all race, Roberts remained steady and pulled back ahead down the homestretch, forcing Lanigan to settle for the runner-up finish in his self-designed Club 29 Race Car. Frank, who claimed the only previous WoO stop at I-96 in 2007, was third in the Sorbera Chiropractic Rocket, while 2006 WoO LMS champion Tim McCreadie of Watertown, N.Y., took fourth in the Sweeteners Plus Rocket ahead of leading series rookie Frank Heckenast Jr. of Frankfort, Ill., in the Heckenast Racing Club 29 car.

After taking second from Frank on the race's final restart on lap 42, Lanigan followed Roberts' line around the track's top groove before moving lower on the track to make his bid for the lead though the final corner. Lanigan crossed the finish line a mere 0.408 seconds behind Roberts, notching his 26th top-five finish in 30 races.

"He was super good around the top," Lanigan said, describing how Roberts mastered the tricky cushion that kept drivers on their toes throughout the event. "I gave it a last-lap effort there to try to get it done, but he did a good job. Starting sixth and to come home second, I'm definitely happy. He did a great job to get his first win — super job.”

After lowering the track record in time trials and dominating his heat race, Clanton appeared headed for victory in dominating the majority of the main event. He built leads of more than a straightaway at times and continued to pull away from his chasers even in traffic. But his bid to end his year-long WoO winless streak came to an early end when he slowed in turn two with 42 laps completed.

"It's heartbreaking, but that's racing," said Clanton, who debuted a new Capital Race Car in Friday's event. "This being a brand new race car, as good as it was you can't ask for much more. Set a new track record, won the heat, led every lap that we were on the racetrack — that's a pretty good night. It just sucks that Lady Luck got us."

Restarting second after the lap-42 caution for Clanton, Frank was aiming to end a winless streak even longer than Clanton's, but he was unable to challenge Roberts as the race went back green and Lanigan drove by for the second spot.

"We just weren't any good on the restarts," said Frank, whose winless stretch on the WoO reached exactly five years on Friday. "I don't know why, if it was tires or what. I just needed a few laps to get going and just could not get going on the restarts.”

Rick Eckert of York, Pa., drove the Rocket Chassis house car to a sixth-place finish, while Morgan Bagley of Longview, Texas finished seventh in the P&W Sales Rocket. Clint Smith of Senoia, Ga., was eighth in the Todd Wood Racing Rocket with Eric Wells ninth in the Wells Motorsports Rocket and Mike Spatola 10th in a Warrior Race Car.

The race was slowed by four cautions, the first appearing when Rusty Schlenk of McClure, Ohio had mechanical issues with 23 laps complete. The next yellow flag waved on lap 35 when WoO LMS rookie contender Chase Junghans of Manhattan, Kan., slowed on the front straightaway, collecting Tim Fuller of Watertown, N.Y. Jeep Van Wormer of Pinconning, Mich., spun to bring out a lap-36 caution, and Clanton's flat tire caused the final caution on lap 42.