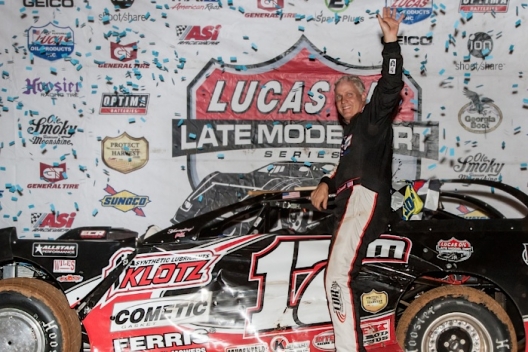 BULLS GAP, Tenn. (Aug. 21) — Dale McDowell captured Thursday’s Scorcher 50 on the Lucas Oil Late Model Dirt Series at Volunteer Speedway, but it was anything but easy for the 48-year-old driver from Chickamauga, Ga.

Overcoming a few mechanical bugaboos, avoiding a pileup triggered by polesitter Scott Bloomquist’s blown tire on the third lap, and then barely squeezing between the turn-two wall and a spinning car in another early accident, McDowell led 48 of 50 laps for the $10,000 payday and his second career series victory at the high-banked 4/10-mile oval that claimed several victims.

“We was fighting little battles all night long. At the beginning the starter when out, then it hung in low gear,” McDowell said in victory lane. “And then that wreck happened and it closed in the header a little bit. I guess it was just meant for us to make it through the night.”

McDowell thanks his brother and crew chief Shane McDowell, along with all his Team Dillon Racing crew, “for building something to tough enough to withstand all that” in a race where Bloomquist, Eddie Carrier Jr., Earl Pearson Jr., and other top drivers got banged up.

McDowell’s car, too, showed some battle scars with the right side scraping the turn-two wall and the left-side catching a big piece of Jason Welshan’s spinning car on the 12th lap.

“We went down (into turn one) on that caution where they were all piled up … there was a little hole — it wasn’t big enough obviously — but I squeezed through there and got both sides a little bit,” McDowell said.

“This place is just fast. You go quick here, and everything, including wrecks, happen quick here. So when something happens, you’re up on the wreck before you know it. And that’s what makes this place unique. I love coming here and I’ve had a lot of success here over the years, and, shoot, happy to be in victory lane with Lucas Oil.”

McDowell took the checkers ahead of Mike Marlar of Winfield, Tenn., who started 12th but deftly avoided the early accidents. He took the second spot from John Blankenship of Williamson, W.Va., just past the halfway point with Blankenship settling for third.

Bloomquist, the night’s fast qualifier, showed how fast his car was by rallying from the tail after being involved in both early pileups to finish fourth. Jared Landers of Batesville, Ark., came from his 16th starting spot to round out the top five.

Two drivers with extensive Volunteer success weren’t around at the finish, neither because of the wrecks that hampered so many others. Chris Madden of Gray Court, S.C., dropped a driveshaft on the first lap, and Lucas Oil Series points leader Jimmy Owens of Newport, Tenn., had rough night, qualifying poorly and winning the B-main before transmission woes forced him out after 25 laps.

After setting fast time, Bloomquist barely had a chance to assert himself before he blew a right-rear tire down the backstretch on the third lap. While McDowell and Blankenship were able to jump to the high side when Bloomquist’s car came to a virtual stop inside turn four, Pearson’s car slid into Bloomquist while Carrier’s car was briefly knocked airborne when Brad Neat slid into the mess that involved at least eight cars.

“Those guys had that big wreck and I fortunately snuck through there,” said Marlar, who went around the mess. “I seen some aluminum angle flying off somebody’s car at the end of the back straightaway, and I’m like, 'I’m outta here.' ”

Blankenship too was fortunate to avoid it along with the lap-11 wreck when Bloomquist and Welshan got together in turn one and spinning cars nearly blocked the track again.

“That was close. I just saw stuff flying,” Blankenship said of the first accident. “I couldn’t even see what was going on. Everybody got bowed up, I guess behind us, a bunch of 'em got wrecked. We got lucky and got through that one, and then got through the big one here in turn one. So I guess we’ll take it.”

McDowell knew that his good fortune and Bloomquist’s misfortune played a big role in his victory.

“He had a good car. I don’t really think, if nothing would’ve happened, we couldn’t have done anything,” McDowell said. “He was good all night and good on the (stopwatch).”

But McDowell was also glad to accept a victory in another solid season of part-time racing — he took Eldora’s $100,000-to-win Dream XX in June — while splitting his time among his various racing duties.

“I’m really blessed. Austin and Ty (Dillon), Richard (Childress), everybody at RCR allows this to happen. We do the development deal. We’ve got Blake Shapiro and Kate Dallenbach, (and) Shane’s doing an awesome job with the development program. Me involved with Boyd’s Speedway now. It enables me to split my time up, and we love, Shane and I love to go race.

“They’ve treated us like family. We’ve been there since ’07 and Austin and Ty and Richard and Mike (Dillon) and Tina (Dillon), everybody there treats us like family, so they allow us to to do this. And we’re having a blast.”

Notes: McDowell won his sixth career Lucas Oil race. His previous series victory came Sept. 4, 2010, at Portsmouth (Ohio) Raceway Park, and he won at Bulls Gap in 2009. … Don O’Neal of Martinsville, Ind., second in series points, finished sixth and outpointed Jimmy Owens for the first time in a race since July 11. … Thirteen drivers completed 50 laps. … Besides the cautions for accidents on the second and 11th laps, a lap-22 yellow appeared for Richard Leake and a first-lap caution appeared for Madden’s errant driveshaft. … Drivers who failed to make the feature lineup: Ryan King, Travis Greer and Bryan Hendrix.