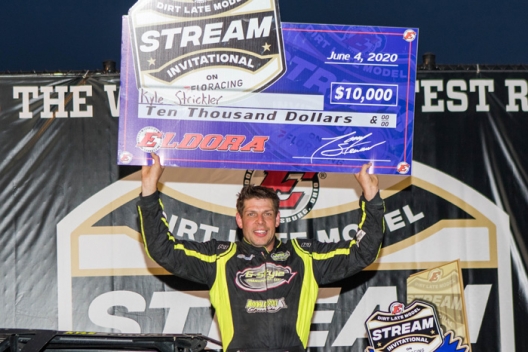 ROSSBURG, Ohio — Talk about crashing the party. When the original roster of 48 invitees for the Dirt Late Model Stream was released, Kyle Strickler’s name wasn’t even on the list. But when four drivers opted not to participate in the unique $50,000-to-win weekend at the Tony Stewart-owned half-mile, Strickler, of Mooresville, N.C., was among the four alternates.

On Thursday Strickler made the most of his opportunity. With a dominating drive from the pole position, he led flag-to-flag to win the Dirt Late Model Stream Invitational opener, a 30-lap preliminary feature worth $10,000. Strickler took the lead on the opening lap, built an advantage of more than three seconds midway through and then negotiated lapped traffic over the final seven circuits to finish 1.164 seconds ahead of third-starting Shane Clanton of Zebulon, Ga.

“We left (North Carolina) late last night because … I don’t know if everybody knows or not, but I’m not even supposed to be here,” Strickler said in victory lane. “I missed the fan vote. I texted (Eldora general manager) Roger (Slack) and was really upset, not with him, but with the format ‘cause I wanted to be here so bad. Man, thanks to all my fans who voted me up, or however the system works. Thanks to everybody at DirtonDirt and everybody who’s been helping me get my Late Model deal going. We got in as an alternate and you see what can happen here at Eldora.”

Strickler qualified ninth fastest and finished second in his heat behind fast qualifier Chris Ferguson of Mount Holly, N.C. He started from the pole position following an invert of the six fastest qualifiers who managed to finish either first or second in their respective heat. He shot into the lead at the opening green and quickly pulled away. His only stutter came on lap 12 when he slipped over the cushion and banged his right rear off the wall. It left the right rear of his Longhorn Chassis crumpled, but still plenty fast.

“I didn’t know I had that much damage,” he said after climbing from his car and surveying his mangled quarterpanel. “It’s huge here. At the Dream last year I was leading and leading and I knocked the quarterpanel off of it and I didn’t want to do that again. I was paying attention to my signal man so much and watching (crew chief) Vinny (Guliani), that I screwed up off of (turn) two and got into the fence and man I thought I gave it away. So I barely even looked at him the rest of the way. I just focused on my line."

The former open wheel modified star, who, in just his second season in the full-fendered division, admitted he’d considered quitting and heading back to the modified ranks “because we were struggling so bad” said that while he’s “won a lot of mod races … this is a career win.”

“I just tried to keep the boys positive and told ‘em if we get the car right and find what I’m looking for as far as feel, that we would be there,” Strickler said.

Though Clanton fell nearly a straightaway behind, the 2015 World of Outlaws Morton Buildings Late Model Series champion managed to reel in the leader once Strickler began navigating lapped traffic. After the lead ballooned to nearly four seconds, Clanton pulled his Capital Race Car to within .813  of a second in the waning laps, but could never draw close enough to take a stab at the lead.

“I could see (Strickler) was running like a dog chasing that rabbit,” Clanton said. “I don’t know if he can make it 100 laps up there (on the cushion), but 30 laps and he made it. Hat’s off to him. He drove a hell of a race.”

Clanton said his tire choice could’ve been the difference.

“Our car was pretty good there,” Clanton said. “We went with a little harder tire than Strickler did. I was hoping he would uses his stuff up and have a caution later on and he’d blister a tire or whatever. Overall we had a good car and if we can make some more adjustments for (Friday), we’ll be pretty good I think.”

Sheppard’s charge from 12th to third left the Rocket Chassis house car chauffeur feeling as though he not only has a machine capably of contending on Friday and Saturday, but that he could have contended for a win in the opener had he had a little better starting position.

“I think I definitely had a winning car tonight,” said last year’s Dream winner. “My car was so good. I could run wherever I wanted to all over the racetrack. I hope Saturday I can stand up here and tell you the same thing because that thing was just so good. You know we had a good car all night long really.

“We qualified in the wrong line on the racetrack and that kinda set us up to start in the back of the feature. I’ve been preaching that all year this year. We’ve got to start up front. That’s were we messed up tonight too … started fifth in our heat and luckily we were able to get third there and that put us starting 12th in the feature. You gotta start up front in these races to be able to really have a good shot at winning ‘em.”

Notes: Twenty-two of the 24 starters finished the feature, with 17 completing 30 laps. … The 30-lapper was slowed by a lone caution as first retiree Jimmy Owens of Newport, Tenn., slowed on lap three to bring out the yellow. … Strickler said that despite the late invite, he still almost didn’t make it to Ohio. “We had a flat tire on the trailer and blew an airbag out (on the hauler),” he said. “I wasn’t even sure we were gonna make it here.” … Strickler said before making the trip his team had to “bum a tire guy” because his regular tire guy had gone on vacation to the beach. … Fifth-starting Brandon Overton of Evans, Ga., was up to fourth by lap 11 and took third on lap 14, but saw his night take a turn for the worse when he gave up the third position with just two laps remaining as he pulled into the infield pit area. He was credited with 23rd. … Shane Clanton gave props to Eldora owner Tony Stewart, general manager Roger Slack and “all the guys here at Eldora for even giving us an opportunity to race for any kind of money. But then to put $50,000 up Saturday, it feels pretty good to know that somebody’s looking after us.” ... Tanner English of Benton, Ky., a rookie candidate on the Lucas Oil Late Model Dirt Series, lost a motor in his consolation race and is scratching for the weekend, according to the team.

Feature polesitter Kyle Strickler is making only his third major-event Dirt Late Model appearance, but he knows what it feels like to lead an A-main to the green flag. He started from the pole in last year's 100-lap Dream and led laps 1-2 and 16-47 before finishing 14th. ... After running away from the pack to win the second heat by a full straightaway, Brandon Overton was pleased but certainly not satisfied with the performance of his David Wells-owned Longhorn car. “It felt all right,” a cool, confident Overton said while grooving a tire before the feature. … Heat 4 victor Tim McCreadie said his Longhorn house car overheated slightly but wasn’t overly concerned. … Chris Simpson was unable to start the third heat because he couldn’t get his brand-new Longhorn car to fire in the pit area. “It’s something in the wiring,” said Simpson, who went out for the second B-main with the help of a push start but mourned that his hopes for the weekend had taken a bit hit with his problem. … Donald McIntosh was very competitive for the first half of the fourth heat — he traded sliders with Brandon Sheppard battling for second — but he pulled off on lap seven after losing fourth to Tyler Erb. He said a belt came off and made his 007 Chassis overheat like it did during time trials. “I don’t know,” McIntosh said in exasperation when asked about his struggles. … Jonathan Davenport won the first B-main but found a blown head gasket in his Double L Racing machine, forcing him to hastily pull out his team's backup car to start the feature.

Holding off  Dennis Erb Jr. and Chase Junghans following a late caution, Jonathan Davenport of Blairsville, Ga., won the first consolation race. Erb moved from third to take the second spot, while Junghans nipped Josh Richards for the third and final transfer spot. Jason Jameson got into the wall with three laps remaining to bring out the second caution. Jerry Bowersock spun on lap one to draw a caution.

Tim McCreadie of Watertown, N.Y., dominated the fourth and final heat, leading the caution-free 10-lap prelim from start to finish. He finished 2.190 seconds head of Michael Norris, who held off Brandon Sheppard for second. Tyler Erb grabbed the final transfer spot from Donald McIntosh, on lap six, though McIntosh pitted a lap later.

Turning back Chris Madden’s opening lap charge, second-starting Shane Clanton of Zebulon, Ga., led all the way to win the third heat. Third-starting Madden charged to the front on the low side, but gave way as Clanton pulled away early. Polesitter Jimmy Owens slid back to fifth before rallying to finish fourth, just behind Devin Moran. Hall of Famers Billy Moyer (seventh) and Scott Bloomquist (ninth) were never a factor.

Surging ahead of polesitter Steve Casebolt midway through the 10-lapper, Brandon Overton of Evans, Ga., picked up the win in the second heat. Overton finished 3.487 seconds in front of runner-up Ricky Thornton Jr., as Scott James grabbed the third spot. Casebolt settled for the fourth and final transfer spot.

Fast qualifier and polesitter Chris Ferguson of Mount Holly, N.C., led the first heat flag-to-flag topping Kyle Strickler by 2.279 seconds. Ricky Weiss finished third, with Bobby Pierce fourth. Pierce, the outside front row starter, bobbled in turns one and two on the opening lap and lost four positions, but rallied back on the high side to grab a transfer spot, passing Jonathan Davenport with four laps remaining.

Freddie Carpenter’s Stream weekend was over almost before it began when he broke an engine rod in hot laps. “A half a lap … it’s sickening,” the Parkersburg, W.Va., driver said. It was his third motor in 10 days with problems and crew members had taken a quick trip to Illinois to pick up the quickly purchased powerplant. “It is what it is. You can’t cry over spilt milk. … Donald McIntosh was respectable 12th-fastest in time trials, but he only turned one lap because he shut down his overheating Buick engine after crossing the start/finish line. … Scott Bloomquist tallied a subpar qualifying time after making hasty repairs to his machine; during hot laps his car bottomed out, knocking a belt off and causing it to overheat. … Kyle Strickler was smiling after turning then ninth-fastest circuit. He joked, however, that he needs “a longer gas pedal” to let him push the throttle further to the floor on the fast track. … Former Dream winners Darrell Lanigan and Rick Eckert were the slowest qualifiers. … Nick Hoffman’s Hatcher Motorsports team was working on an engine swap after apparently breaking a timing belt in hot laps; they missed their qualifying laps. … Chase Junghans of Manhattan, Kan., also had apparently engine problems in hot laps and went to a backup car for time trials. His luck didn’t get much better as his 21st fastest qualifying lap was disqualified because he was 12 pounds light at the scales.

“The car was pretty flawless,” said Ferguson. “This car’s been a good one to us. We ran it last year at the Dream and the World (100).”