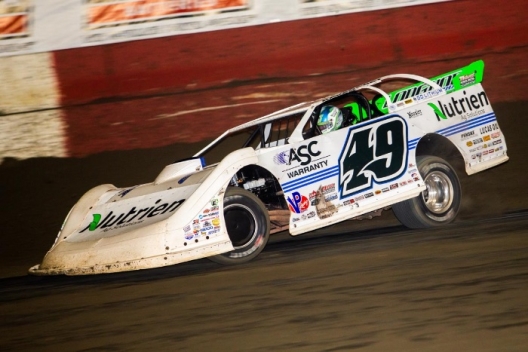 “Man,” Davenport said after climbing out of his car in a victory lane located in the pit area with the event running without spectators due to Covid-19 concerns. “What a relief.”

Indeed, Davenport, 36, of Blairsville, Ga., entered the first program of East Bay’s midweek tripleheader riding a frustrating string of outings since returning from racing’s two-month coronavirus-related shutdown. He needed a morale-boosting rebound — and at a track where he’s enjoyed plenty of success, he got it.

Coming alive during the A-main’s second half, Davenport shot past Jimmy Owens of Newport, Tenn., for second on lap 24 and soon after grabbed the lead on lap 31 from Shane Clanton of Zebulon, Ga. After handling two restarts over the remaining circuits, the $7,000 top prize was J.D.’s and his slump was over.

Davenport steered his Double L Racing Longhorn car across the finish line 0.806 of a second in front of Clanton, who led all but one of the race’s first 30 circuits in his Skyline Motorsports Capital machine.

Outside polesitter Brandon Overton of Evans, Ga., battled hard for the lead with Clanton for most of the race’s first half — even slipping ahead to lead lap 12 while trading sliders with Clanton — but relinquished second and retired on lap 19 due to a vibration in his Wells Motorsports mount.

Davenport’s lone triumph this season entering East Bay’s action came in the Lucas Oil Series’s Georgia-Florida Speedweeks finale on Feb. 9 at All-Tech Raceway in Ellisville, Fla. He didn’t finish better than fourth in his six ensuing starts before racing went on hiatus in mid-March and topped out with a pair of thirds in his seven outings since jumping back into competition this month.

While Davenport’s three Lucas Oil finishes last week at Golden Isles Speedway near Brunswick, Ga., were increasingly better — 11th, seventh and sixth — he certainly wasn’t pleased with his performance. Some hard work by his Jason Durham-led crew, however, returned him to form at East Bay.

“I just gotta thank this guy right here,” Davenport said, pointing at Durham. “It’s been a struggle the last week, two weeks. Man, we’ve changed every shock on this thing 10 different times so it couldn’t have been the great Penske Shocks. We’ve changed Hoosier tires. We’ve changed everything. The only thing we haven’t changed is the driver, and we was just about to do that.

“We gotta thank (team owner) Lance Landers for sticking with us. It’s been tough for all of us.”

Starting fifth in the Memorial Day headliner, Davenport bided his time throughout the first half of the sometimes frenetic race. He ran steadily just outside the top five until moving to fifth when Overton pulled off on lap 19.

“I was just really patient at first because the track blowed off way faster than I thought it would,” Davenport said. “It’s been really fast through all the heat races and then, all of a sudden, as soon as we rolled that top in, it’s like the tide when out and it got really dry all of a sudden.

“I knew I just wanted to have the best tires once we got to the last 10 laps, and I was just patient and passed a few cars on the bottom. And when I knew it was time to go to the top and go, that’s what we did.”

Davenport burst into third on the restart following Overton’s departure, sneaking by Erb and McCreadie. After gaining second from Owens, he completed his march to the front with an inside move on Clanton through turns one and two on lap 31.

The race’s final restarts, on laps 36 and 38, weren’t easy for Davenport, but he turned back brief challenges from first Owens, and then Clanton, to secure his 48th career win on the Lucas Oil circuit.

“Yeah, no doubt,” Davenport said when asked about the headache the restarts provided. “Especially those ends (the corners) because I don’t really know where to go. And it was so slick in the center I had to wait a long time to take off because I didn’t think ringing around the cushion would’ve been the way to take off.”

Clanton, 44, didn’t have enough grip left down the stretch to deal with Davenport.

“I just started losing the right-front tire there in that shine, and I got so tight getting in the corner I was having to bend it pretty hard,” said Clanton, who started from the pole position. “I was doing all I could, and I caught the lapped car (on lap 31) and he was in my line and I needed to get better at trying to turn under him, and I missed the bottom off four and J.D. got a good run on me (entering turn one).

“Then Owens got a run on me and we were just racing in traffic there. I tried to get it back on that restart there (lap 36) and I got into Jimmy (who fell from second to fourth) and I didn’t mean to … just hard racing there.”

Clanton’s run was his best of 2020 and his sixth straight top-10 finish on the Lucas Oil Series, a tour he’s following for the first time in his career this season.

“We worked awful hard here the past month that we’ve had off and got our cars a lot better,” Clanton said. “We just make sure we stay on our toes. These guys are tough. The (World of) Outlaws are tough, but these guys, I think there’s more of us over here that can run good so it makes it a tougher deal over here.”

The 46-year-old McCreadie maintained his Lucas Oil points lead with a third-place finish — he ended the night with an 80-point edge over Davenport — but he felt he let a chance to contend for the win slip through his finger. On lap 14 he slipped high through turns one and two after overtaking Overton for second and tumbled all the way to fifth.

“I just made a big mistake going into one,” McCreadie said. “I apologize to (car owners) Donald and Gena (Bradsher) and the entire team.

“Brandon Overton and I were racing so hard and I slid him down into three, and I thought I better go in there (turn one) and slide myself. And when I went in there and locked the rearend up, it got to clunking in high gear and it got stuck in high gear, and I thought I was gonna spin out in front of the field … but it cost us three, four spots.”

The race’s seven caution flags flew for Shanon Buckingham, who slowed with body damage on laps two and 36; Stormy Scott spinning on lap eight; debris on lap 13; Steven Roberts and Jeff Mathews tangling between turns one and two on lap 19; Overton’s trouble on a lap-19 restart; and Josh Richards’s flat left-rear tire while running sixth on lap 38.

Notes: On a night when thunderstorms seemed to be dancing all around the area, only some light sprinkles fell on the track during the program. … The feature ended at 10:12 p.m. … Tyler Erb was penalized two spots by Lucas Oil Series officials — moving him from fifth to seventh — during a lap-38 caution period for jumping the previous restart. He recovered to salvage a fifth-place finish. … Tanner English briefly cracked the top five on a lap-19 restart but settled for an eighth-place finish in his Riggs Motorsports No. 81E. … Hudson O’Neal’s MasterSbilt house car was towed off the track on lap 38 with right-side damage after he clipped the Clint Bowyer Racing machine driven by Josh Richards, who was slowing entering turn three due a cut left-rear tire. … Stormy Scott retired from further competition after his lap-eight spin due to a broken right-front lower control arm.