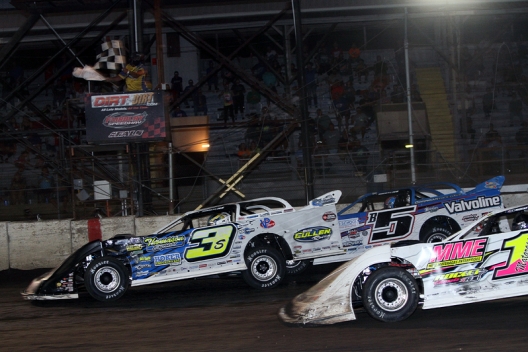 FAIRBURY, Ill. (Aug. 12) — Brandon Sheppard and Frank Heckenast Jr. were having a whale of a race at Fairbury Speedway on Wednesday. Then Brian Shirley showed up. But rather than stink up the show, Shirley simply made it three times the fun.

Shirley of Chatham, Ill., took the lead from Sheppard of New Berlin, Ill., on lap 32 and then held off Sheppard’s last-lap, high-side charge in traffic to win Wednesday’s DIRTcar Summer Nationals race by 0.090 of a second at Fairbury.

Shirley, who started third, drove in between the cushion-pounding Sheppard and the hub-hounding Heckenast, surprising both of the race-long front runners. Making his move through the middle stick, Shirley pulled even with Sheppard on lap 31 before wresting the lead away on the next circuit and in thrilling fashion held on for his fifth series win of 2020, while earning $5,000.

“I was a little confused because I passed those guys right in the middle and I felt like my car was pretty good and I got nervous ‘cause I was out there riding in the middle,” said Shirley. “So I went back down to the bottom and I knew Sheppy would be up on that top. And then when we got to them lapped cars, I was creeping and creeping and not really getting as much grip as I wanted to be.

“On that last lap, I was just … I needed to stick with what got me there and that middle got me there. And I knew where the lapped cars was, no one could really get me on the inside. I just had to worry about Sheppy on the outside.”

With Shirley dealing with the slower cars of Mike Mataragas, Steven Roberts and Donny Walden directly in his path on the last lap, Sheppard got a great drive off of turn four and pulled alongside. But the two-time and reigning World of Outlaws Morton Buildings Late Model Series champion and winner of Monday’s Summer Nationals race at Sycamore (Ill.) Speedway fell a half car short as they flashed under the checkered flag.

Heckenast, who led eight of the first 10 laps after starting from the pole position and then swapped the lead back and forth with Sheppard during an entertaining 20 circuits from 11 through 30, settled for third, eight car lengths back of Sheppard. Ryan Unzicker of El Paso, Ill., finish fourth and starting second and leading laps three and four, while Allen Weisser of Peoria, Ill., improved four positions to complete the top five.

“The car was awesome and we did everything we needed to do,” said a disappointed Heckenast. “I don’t know what happened to be honest. Me and Brandon … he’s the best driver in the country, I don’t care what car he’s in. We were running each other hard, good and clean. I passed him back and he passed me and out of absolutely nowhere, Shirley drives around both of us in the middle of the track. So it was just one of those deals, maybe you’re better off running third and watching us.”

Sheppard started fourth and waited patiently while Heckenast and Unzicker swapped the lead in the early going. When Unzicker, who, like Sheppard was running up against the cushion, bobbled slightly, Sheppard there to grab second. He took the lead for the first time on lap 11.

“The top was really far up there. It was treacherous and the cushion wasn’t very big,” said Sheppard. “I got the lead up there, but I was kinda giving her all I had for the most part and I was trying to keep my momentum up and trying not to abuse the cushion too bad. The bottom was throwing crumbs up and them guys were hitting the (infield yuke) tires in and I wasn’t sure when them crumbs were gonna get wet and start going a little bit. So I never really tried it. I never really thought they were wet enough to go in.”

While all three drivers managed to get through lapped traffic unscathed, the slower cars allowed the third-running Shirley to close in on the leaders. After watching Sheppard and Heckenast swap the top spot back and forth for 20 of the first 30 laps, Shirley finally joined the fray on lap 30.

“Shirley showed me a nose and I moved down there a little bit,” said Sheppard. “That was where I needed to be at that point, but by then he was already there so … another great night for the family team. It was a great race. There was a few things there at the end that I wish I did different. I didn’t have my car quite the way it needed to be I think. I think in a longer race I would have been better.

“There’s a lot of different variables that I could’ve, should’ve, would’ve did. But I’m definitely not gonna hang my head. We were right there. Like I said, I wish I would have moved my line. But congratulations to Brian. He’s been really tough on this (Summer Nationals) deal. That was a really fun race. I didn’t think there was a lap there that went by that I didn’t see Frankie underneath me and then all the sudden Brian shows me a nose right there and it was too late after that. He kinda gave me the ol’ sneak attack.”

Heckenast could only shake his head when thinking about how good his car was, only to end up third.

“I feel like I drove a perfect race,” he said. “I think the only thing I could have done different maybe is when those lapped cars were in the way, I cleared ‘em in the middle the one time and I think I showed Shirley that it was pretty sporty right there and I went right back down where I was and I think opened the window for him to just watch it all play out.”

After getting his first series win in the sixth race of the tour, Shirley has now won five of the last 10 events. He was happy to bounce back with a win on Wednesday after running third on Tuesday at Sycamore.

“I was definitely a little disappointed (Tuesday) night to be honest,” Shirley said. “You know (Sheppard) come in there last night and really kicked our (butt). I didn’t know that we would win tonight, but I really wanted to make sure that we didn’t get our (butts) kicked that bad like he did last night. So I felt better on that aspect, but man that guy is the best driver in the country for a reason you know. So anytime you can win a race over him, it’s something to be proud of.”

Notes: It was Shirley’s 31st career Summer Nationals win and his third at Fairbury. His previous wins at the fairgrounds oval came in 2012 and 2019. … Eleven of the 22 starters completed 40 laps. … Fairbury hosted the DIRTcar Summer Nationals for the 33rd time and for the first time ever, the track is hosted the series twice in the same season. … Gordy Gundaker, who won the series visit back on July 11, joined the starting field as a series provisional when Tim Lance of Brimfield, Ill., who was in line for a provisional, decided he’d be unable to start the main event. … The race was slowed by two cautions, one on lap six for Daryn Klein of Fairview Heights, Ill., and one on lap seven for Mike Spatola of Manhattan, Ill. Neither were serious.

Polesitter Frank Heckenast Jr., of Frankfort, Ill., is chasing his fourth career DIRTcar Summer Nationals victory and second of 2020. Heckenast’s win this season came at Springfield (Mo.) Raceway on July 23. Heckenast’s other tour triumphs came at Shadyhill Speedway in Medaryville, Ind., in 2018 and Kankakee (Ill.) County Speedway in 2015. … Ryan Unzicker, of El Paso, Ill., who will start alongside Heckenast on the front row, has 10 series victories, by hasn’t won on the Hell Tour since June 22, 2018 at Tri-City Speedway in Granite City, Ill. … Brandon Sheppard outran Shannon Babb by almost a full second to win the first heat. … Heckenast won by 0.255 of a second ahead of Mike Spatola in the second heat. … Brian Shirley rolled to a 2.168-second victory in the third heat, outrunning Georgian Steven Roberts. … Unzicker just nipped Jason Feger to win the final heat, finishing a scant 0.083 of a second ahead, with Jason Papich in tow. … Both Shirley and Heckenast repeated their heat wins from the July 11 Summer Nationals visit. … Gordy and Trevor Gundaker arrived in time to start the C-main. Trevor rallied from the back to finish fourth and advance into the consolation race, while Gordy couldn’t make any progress. … Wednesday’s provisional starters are Kevin Weaver (track), Rusty Griffaw (national), Tim Lance (series) and Tim Lance Jr. (series).

Brandon Sheppard of New Berlin, Ill., set the overall fast time among 37 entries Wednesday at Fairbury Speedway. Going out seventh in the first of two groups, Sheppard turned a lap of 12.727 seconds to earn the pole for the first heat. Mike Spatola of Manhattan, Ill., stopped the clock at 12.752 seconds and will start from the pole of the second heat. Steven Roberts (12.732 seconds) of Jesep, Ga., was the quickest in Group B with Jason Feger (12.751) of Bloomington, Ill., second quick. Roberts and Feger will roll off from the pole of the third and fourth heat, respectively. Gordy and Trevor Gundaker didn't make it to the track in time to qualify.

Fairbury Speedway welcomes the DIRTcar Summer Nationals for the 33rd time overall and — for the first time ever — the second time in the same season. Fairbury picked up the open date vacated by Jacksonville (Ill.) Speedway, which was actually a replacement for Wilmot (Wis.) Raceway.

The first visit this season, won by Gordy Gundaker of St. Charles, Mo., drew 37 entries. Wednesday’s Fairbury Part Deux, drew 37 as well, including Gundaker, who is driving a car he just bought from J.R. Haley after Gundaker flipped his primary car at Cedar Lake last weekend.

Tuesday winner Brandon Sheppard of New Berlin, Ill., is in attendance in his family-owned No. B5 and series leader Brian Shirley of Chatham, Ill., is chasing his fifth win of the tour.

With 34 entries, there will be four heats with four drivers transferring to the 40-lap main event. The remainder of the field will be set through consolation races and provisionals. Modifieds are also on Wednesday’s card.