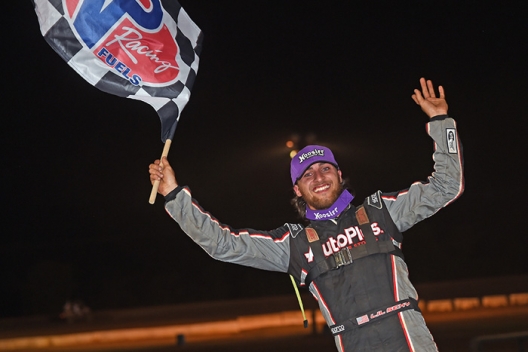 Brian McLeod/Dirt Scenes
Cody Overton celebrates at Cochran Motor Speedway.
What won the race: Cody Overton of Evans, Ga., checked off an item on his bucket list with a flag-to-flag victory worth $2,500 in Saturday night's 50-lap Newsome Raceway Parts Crate Racin’ USA Dirt Late Model Series season opener at Cochran Motor Speedway. He dominated the event, beating Jordy Nipper to the finish line by a commanding margin of 5.362 seconds.
Quotable: "This is the biggest win of my career,” an emotional Overton said. "My brother (Brandon) has won races all over the country, but I have always wanted to win one of these Crate Racin’ USA races and this was a tough field here tonight. Now I've got a Golden Helmet trophy to put on the shelf."
Key notes: Overton started from the pole position and was never seriously challenged as he handled six restarts with ease en route to his first-ever triumph on the Crate Late Model tour. ... Overton's checkered flag came on the same night that his older brother, Brandon, was victorious in the unsanctioned unsanctioned Gene Maine Memorial for Super Late Models at Needmore Speedway in Norman Park, Ga. ... Nipper reached second on a lap-14 restart and stayed there to the finish. ... Pennsylvania Max Blair, staying in Georgia to run his Crate car after competing in two Lucas Oil Series shows at Golden Isles Speedway near Brunswick, Ga., shot from fifth to third on a lap-43 restart and finished in the final podium position. ... Twelve of the 26 starters completed all 50 circuits. ... The event was run without spectators due to coronavirus concerns and streamed live on Speed51.com.; an identical $2,500-to-win show for the series will be run at Cochran on Sunday.
On the move: Trynt Lloyd of Jacksonville, Fla., started 26th and finished 11th. He was relegated to the rear of the field by a deck-height issue that disqualified him from his qualifying time.
Winner's sponsors: Overton’s Rocket Chassis is sponsored by Mid-State Equipment, E-Z-Go, AutoPlus and Signal Hygiene.
Points chase: It was the tour's first event of the 2020 season.
Current weather: Clear, 84°F
Car count: 26
Fast qualifier: T.J. Brittain
Time: 14.931 seconds
Polesitter: Cody Overton
Next series race: May 29, Tri-County Speedway (Pollard, AL) $2,000
Editor's note: Results and race details are unofficial.