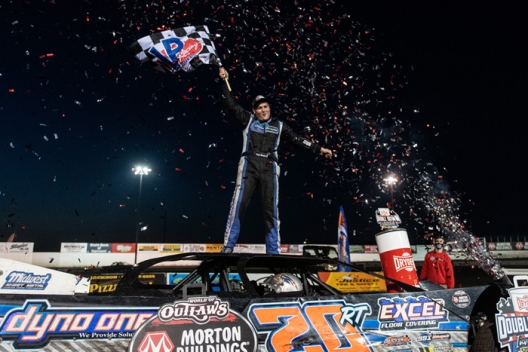 JACKSON, Minn. (May 23) — Everyone has known Ricky Thornton Jr. possesses the talent to excel behind the wheel of a Dirt Late Model. He proved it Saturday night at Jackson Motorplex.

Capping his first weekend of 2020 competition in the SSI Motorsports Longhorn Race Car, the open-wheel modified star from Chandler, Ariz., who now lives in Iowa roared to the biggest and richest full-fender victory of his career — and first-ever World of Outlaws Morton Buildings Late Model Series triumph — in the 60-lap Drydene Double Down Invitational.

The joy of breaking through on a national tour to the tune of a $20,000 paycheck was evident from Thornton’s post-race demeanor.

“It’s huge,” Thornton said of his milestone checkered flag. “I’ve always dreamed to be able to run a Late Model, and (SSI Motorsports owners) Todd and Vicki Burns (of Morgantown, Ind.) gave me this opportunity again. I don’t get to run a Late Model a whole lot every year so maybe this will open some doors somewhere.”

Thornton started from the pole position and led the race’s first lap, but he lost the spot to front-row mate Chad Simpson of Mount Vernon, Iowa, the following circuit and found himself chasing the Hawkeye State veteran for most of the race’s remaining distance. He finally shot into the lead on lap 53 when Simpson slipped high off turn two and mastered a final restart one lap later to beat WoO regular Ricky Weiss of Headingley, Manitoba, by 0.486 of a second.

Thornton has been plenty active in open-wheel modified competition this season — he has 16 victories despite racing being shut down for nearly two months by coronavirus concerns — but he didn’t have a Dirt Late Model ride lined up as the division began returning to action in recent weeks. He landed one for Jackson’s big spectator-free WoO doubleheader with a couple familiar faces in Todd and Vicki Burns, who seemed likely to forego fielding a car in high-level national events this year after ending their run with Hudson O’Neal of Martinsville, Ind., following the 2019 campaign.

“They took the year off pretty much, and Taylon (Center, who works for Todd Burns and is an Arizona native like Thornton) and us kind of talked them into letting us come and run this weekend,” said Thornton, who subbed for O’Neal as the SSI Motorsports driver in 2018 when O’Neal was sidelined to undergo shoulder surgery. “Hopefully we’ll run a little more.”

Thornton made the Burnses’ decision a worthwhile one with a never-say-die drive. He chased Simpson relentlessly throughout the race, unsuccessfully pulling alongside the leader on several occasions before Simpson finally made a critical error.

“My only shot was I was gonna have to slide him off of (turn) four and hope that we didn’t wreck,” Thornton said when asked if he thought he could have overtaken Simpson without the door being left wide open by Simpson’s lap-53 miscue. “The odds are we probably would’ve got second.”

Nevertheless, Thornton’s dogged pursuit of Simpson might have contributed to the deciding turn of events as well.

“That cushion was getting more and more,” Thornton said. “I kept kind of getting under him and he was driving harder and harder and harder, and finally he made that one big mistake and that was kind of all it took.

“That one restart I kept running around the top and then Weiss got under me and pretty much passed me off of four (for second place on lap 41). So I was like, ‘As long as I can get back in front of him and almost block him a little bit.’ But then, you can get such a good run through the center and on exit, and, like, your straightaway speed wasn’t as good but you’d make the guy (ahead) know you were there. So then it just kind of makes him run harder and harder.”

And finally Simpson ran too hard, bouncing over the cushion in turn two on lap 53. Thornton bolted past and never looked back — although the final circuits were anything but easy.

“The last five laps I was kind of … I’ve never gotten nervous in a car, and that was probably the most nervous I’ve ever been,” Thornton said. “I’m a little wore out after that one. I think probably more of it is my nerves than anything.”

Weiss, 31, fell short in his bid to back up his $6,000 victory in the previous night’s opener at Jackson, but he made a strong run forward from the ninth starting spot in his Bloomquist Race Car. The second-year WoO regular lost ground after failing to complete a pass of Thornton for second on lap 41, but he grabbed the position from Simpson on a lap 54 restart and was drawing closer to Thornton as the race concluded.

“We were starting to reel them in at the end there. I don’t know, if it was five more laps maybe we would’ve been there.”

Weiss knew that his inability to pull ahead of Thornton on lap 41 probably was the biggest moment of the feature for him.

“I got beside Ricky a few times,” Weiss said. “And I think if I could’ve cleared him … obviously, when the 25 (Simpson) there slipped up out of two, maybe we would’ve been there to jump on that rather than him.

“But it is what it is. I’m proud of my team here, and the car’s got no damage. We’re leaving here just making things better. It was a real good weekend.”

The 27-year-old Sheppard, meanwhile, felt his conservatism early in the A-main in Mark Richards’s Rocket Chassis house car might have cost him a shot at the big prize.

“I needed to be more aggressive at the beginning of that race there,” said Sheppard, who slipped past Simpson for third place on lap 56 and was hot on Weiss’s tail at the finish. “As good as my car was in the feature tonight, and last night in the feature (he finished second on Friday), I’m definitely disappointed that we didn’t get one.

“But we were right there again. We were moving around and could pretty much run all over the racetrack in three and four, and then I was decent in one and two. There at the end of the race I could really make some speed around the top. I just couldn’t do nothing there at the end there. We kind of got lined out and that was all I had.

It was just a matter of being more aggressive at the beginning of the race. We definitely have to work on our qualifying game. We need to start up front in these races.

Caution flags flew for Chris Simpson slowing on lap 16; Jason Rauen nosing into the turn-one wall on lap 40; Kody Evans stopping on lap 41 (due to a broken wheel as he was primed for a top-10 finish); and fluid that flowed from Ashton Winger’s car on lap 54 as the WoO rookie ran in the top 10.

Notes: Thornton’s triumph came just weeks after his wife, Shea, gave birth to the couple’s second child. His wife and both of their boys were at the track on Saturday. … One night after debuting his new Bloomquist Race Car with a third-place finish, Shannon Babb of Moweaqua, Ill., experienced a rough outing. He transferred through the B-main and advanced from 18th to seventh before an overheating engine forced him out on lap 54. … Scott Bloomquist of Mooresburg, Tenn., started sixth but managed only a 14th-place finish after making a mid-race pit stop…. Justin Zeitner of Omaha, Neb., impressed with a heat-race victory and appeared headed for a top-10 feature finish until his car’s transmission popped out of gear on lap 54, forcing him to retire. … Dennis Erb Jr. of Carpentersville, Ill., hustled from the 17th starting spot to a ninth-place finish after putting in long hours to repair heavy front-end damage his car sustained in a Friday accident. … Chub Frank of Bear Lake, Pa., didn’t enter Saturday’s program because his car was damaged significantly in a Friday crash.