Information provided by: Robert Holman (last updated May 24, 10:30 am)
Casebolt hangs on, wins $10,000 at West Plains
Missouri Hardwoods Back to the Future 50 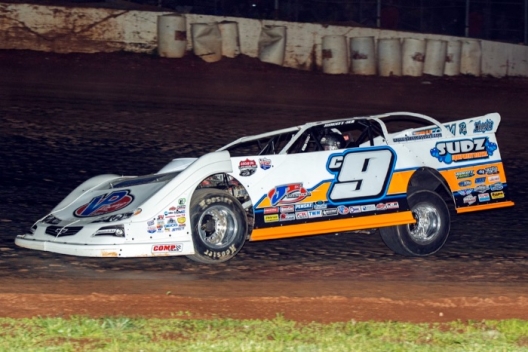 WEST PLAINS, Mo. — Steve Casebolt couldn’t have had a smoother drive the first 42 or so laps Saturday at Legit Speedway Park. But the last few laps for the Richmond, Ind., driver in the Missouri Hardwoods Back to the Future 50 couldn’t have been more nerve-wracking.

His hands full with fellow Hoosier Kent Robinson and home-state racer Payton Looney after the final restart, Casebolt admittedly said he was “going to do everything I could to win it,” and he did just that in running Robinson up the track then denying Looney’s late bid for a $10,000 victory, his first on the Comp Cams Super Dirt Series.

Winning for the first time in West Plains, Casebolt took the checkers a half-second in front of Looney while Robinson was further back in third. Tony Jackson Jr. of Lebanon, Mo., and Hall of Famer Billy Moyer of Batesville, Ark., rounded out the top five.

Casebolt was flawless from outside the front row with a lap-32 scrape with the slower Mason Oberkramer exiting turn four his only tense moment. But with the field bunched for cautions on laps 42 and 43, the leader was wary.

“I knew I’d messed up. I knew I’d protected the bottom too much. I was just a sitting duck on those restarts, man,” the 41-year-old Casebolt said. “When you’re racing for $10,000, I mean, I was going to do everything I could to win it. I didn’t want to wreck anybody, but I was going to block … I was just going to do everything to protect my position, and that’s what I did. I’m sure Kent’s probably a little bit ticked off at me, but we just needed this win so bad and we came down here to win. If the roles are reversed tomorrow, I’d expect him to do the same thing to me.”

Looney, the Republic, Mo., driver who held the second spot much of the race’s second half, wondering if a clash between Indiana drivers on lap 46 might give him the victory.

“I definitely thought they were going to run each other into the fence over there out of (turn) two, and I really thought about running (Casebolt) in the fence out of (turn) four to the checkers,” Looney said with a laugh. “But, I mean, I don’t want to win like that. But kudos to him and K-Rob, and (fourth-place finisher) Tony (Jackson) ran me clean there when I got underneath him.

“I thought the racetrack was just pretty well over with and then Steve kind of went in there on that restart and kind of parked it, and I just kind of parked it with him. I wasn’t going to give up the bottom, and K-Rob kind of, with some experience, you know he outschooled us both there and rolled to the top. I really think I had the best car, but we collected $5,000 and we’re racing and there’s people here to watch it, so that’s pretty exciting.”

Bloomington, Ind.’s Robinson figured jumping to the high side on the final restart was his only hope.

“I had to do something, put on a little bit of a show,” he said. “I mean, honestly, my car wasn’t all that good. I just really killed that right-front tire there early and was struggling. On that last restart, I just thought I’d go up there (in the high groove) and try it. I knew I’d get a couple of good laps and I knew they were signalling (Casebolt to go) up, and if I just would’ve been 2 or 3 feet further (up), it would’ve been a different story. I think the best race car won.

“I thought I might be able to have a chance to win (when he pulled alongside Casebolt and was just a tick behind at the flagstand). I was hoping if I had only about two laps to get up there and the front straightaway and back straightaway started rubbering, so I knew I had to (stay in that groove). Just came up a little short, just part of it.”

Casebolt was relieved to repel the last-ditch efforts after cruising for so many caution-free laps.

“Those guys have nothing to lose. We go down in there, and I’m just trying to protect that bottom and stay in the rubber (groove) or whatever,” he said. “Those guys, they’re going to runs second or third, whatever, they can charge that top, they can do anything they need to do. I’d have looked like a real dummy if I’d have charged the top and four of them would’ve drove underneath of me.

“I just really did not know what to do on those last restarts. I don’t know how much of a lead I had before that, but I have a feeling that those yellows were the only way those guys were going to beat me.”

Notes: Jesse Stovall drew a lap-42 caution when he gave up the 11th spot but getting into the wall … On lap 43, shuffing at the turn-four exit sent eighth-running Neil Baggett’s car around and into the infield. … Stovall’s retirement helped reigning series champion Timothy Culp of Prattsville, Ark., move into the Comp Cams tour points lead. … Series competitors go back at it Sunday for a $4,000 winner’s purse at West Plains.