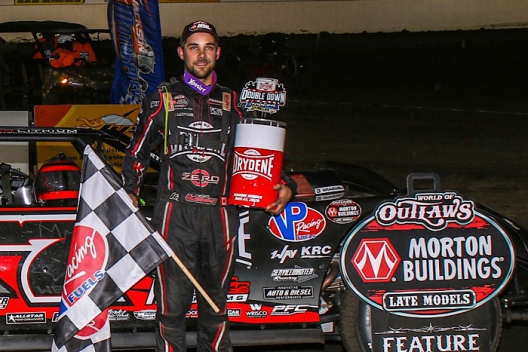 JACKSON, Minn. — With the U.S.-Canadian border under extra restrictions amid the coronavirus, Ricky Weiss of Headingley, Manitoba, was wary about any hiccups in returning to the states for World of Outlaws Morton Buildings Late Model Series competition.

His fellow WoO competitors might be wishing his re-entry was denied.

Starting outside the front row, Weiss led all 30 laps in the first round of the Drydene Double Down Invitational at Jackson Motorplex for a $6,000 payday and his second series victory of the season and his career.

The 31-year-old Weiss, who smoothly cleared any potential medical or legal hangups in crossing the border amid the coronavirus pandemic, added his Jackson victory to his Jan. 4 victory at Vado (N.M.) Speedway Park as the national tour return to action for the first time since March 7.

“I was excited to get going,” Weiss said of the Covid-19 hiatus. “I wanted to do it safely, and the Outlaws, they took their time, and they did it right. I was talking to (series director) Casey (Shuman), and between getting across that imaginary line and coming down here … it’s just awesome.

“I was really excited to come to this track. We did really good at Knoxville (Speedway in Iowa), and it’s a mini-Knoxville. It’s a wonderful facility and I was hoping that rain would hold off until at least 15 laps in, because I knew (the race would be official). Hats off to my guys, they worked so hard on this thing.”

Weiss, who was turning feature laps as quick as 15.3 seconds — marks below the track record — is anxious to take another shot at Jackson on Saturday with a $20,000 winner’s purse on the line, a total padded by Drydene Performance Products, his primary sponsor.

Drydene “put up some money this weekend and they got some cars in the pit area,” Weiss said. "It should be a great show tomorrow and hopefully the rain holds off and we can get it done.”

Runner-up Brandon Sheppard, looking for his first series victory since Feb. 12, started 10th and was up to second after just nine laps, but he wished he’d have started closer to the front.

“We just had a really balanced car. We could move around on the racetrack early there — before the top got dirty there, anyway, we could move around. We just had a good car like we do every night in the feature,” he said. “I messed up qualifying — I ran the wrong line — and we learned something tonight; hopefully that helps us out for the race tomorrow. I’ve definitely gotta do a better job qualifying. I haven’t been qualifying up to par.

“We definitely want to win. Our consistency’s there. Everything just hasn’t played our way yet. It’ll come with time. Our car’s really good. We’re right there. We’ve just gotta start putting full nights together and that starts with qualifying, and that’s where I haven’t been doing my job correctly. I’ve gotta get a little bit better there and I think the wins will start coming.”

Babb, who held the second spot the first eight laps and ran third thereafter, was pleased with the performance of his new Team Zero ride.

“This was our first time here at this racetrack and it raced really good. Ricky, he was definitely the best race car tonight. He really could roll through the corners really well. But for the first night on this car, I was just blown away,” Babb said. “It was a lot of fun to drive … (Bloomquist) builds a heckuva a race car. We just got it together about three in the morning and drove all the way up here, so we were really impressed with it.”

Six cautions slowed the 30-lapper, including four in the first five laps. The worst incident came when Tad Pospisil nearly went around exiting turn two on a lap-five restart, causing a scramble that knocked Pospisil, Dennis Erb Jr., and traveling mates Chub Frank and Boom Briggs out of the race.

The first caution came on the second lap when Scott Bloomquist jumped the cushion and got into the wall between turns three and four while turn two caused more problems. Frank Heckenast Jr., Justin Zeitner and polesitter Brent Larson spun in turn two over the next four laps before the Pospisil-centered fracas.

The final two cautions came on lap 10 when Larson and Cade Dillard tangled in turn four and finally on lap 18 when Blair Nothdurft was turn two’s final victim.

Notes: The feature wrapped up before 9 p.m. as rain started to fall … The Tri-State Late Model Series was added to the undercard for both nights of action. … The Jackson events are run spectator-free but streamed live on DIRTvision.com. … Before the weekend, WoO last visited Jackson on June 18, 1988 in race won by Willy Kraft of Lakefield, Minn.