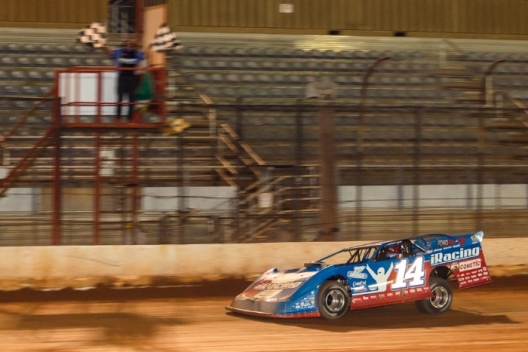 BRUNSWICK, Ga. — When leader Devin Moran got into the wall Wednesday at Golden Isles Speedway, the second-running Josh Richards got caught up in the mess and was knocked out of contention.

Fast forward to Thursday when another leader — this time Mason Zeigler — got into the wall with Richards hot on his heels, only this time there was no calamity for the Clint Bowyer Racing pilot from Shinnston, W.Va.

Regaining the lead with Zeigler’s departure, the third-starting Richards led two laps on the final restart for a Lucas Oil Late Model Dirt Series victory in the Optima Batteries Golden Isles Nationals. Richards, who inherited the lead on the eighth lap when polesitter Brandon Overton departed with ignition woes but lost the point to the high-flying Zeigler on lap 29, earned $7,000 for his 29th career victory on the national tour.

“I was kind of a little bit of a sitting duck (when Zeigler was tracking him). My car … we set it up the same (as the previous nights), but I couldn’t roll the corners as good as I wanted to, and I was kind of abusing the right-rear (tire) a little bit, so I was trying to find a good rhythm,” Richards said. “Once he got by me, I was just trying to turn the wick back up, and hoped he’d make a mistake, and the same thing with Moran last night. Last night night we got caught up in the wreck, and tonight Mason slipped up a little bit, and I was able to hold ’em off at the end.”

Zeigler, Tuesday’s runner-up, appeared to have Thursday’s 40-lapper in hand when he got too high in turn two and skittered into the concrete as Richards went by and the final caution flag fell. With raindrops beginning to fall, Richards took the green-white-checkered finish as the tour wrapped up its third race in as many nights after a 100-day coronavirus-forced hiatus.

Richards took the checkers 1.216 seconds ahead of Tim McCreadie of Watertown, N.Y., while Tuesday’s winner Jimmy Owens of Newport, Tenn., was third. Mark Whitener of Middleburg, Fla., and tail-starting Devin Moran of Dresden, Ohio, rounded out the top five.

Overton, of Evans, Ga., led the first seven laps comfortably from his pole position, but he pulled up lame exiting turn four with apparent ignition problems and coasted to a stop before he was pushed off the track.

Worried about the sprinkling rain and a hot right-rear tire, Richards was wary about the final restart.

“When you’re in the lead, you have a little bit of (an advantage) where you pick the throttle up, to try to fool ’em a little bit if you can. But you just never know,” he said. “When I was leading early, I was looking over (at the crew), and they were saying run low, and I was like, ’Man, I think I need to get up there and hustle.’

“Of course, once when (Zeigler) got in front of us, that’s what we needed to do. I can’t thank these guys enough. Our hot rod’s been fast all week and I hope this isn’t the last one for a while. Hopefully we can keep this thing rolling and get a few more.”

McCreadie, who started outside the front row and slipped back to fourth early, moved into the Lucas Oil points lead with his runner-up finish.

“We’re happy to be second. It was tough,” he said just before a postrace thunderstorm hit the track. “Mason was a good bit better than we were, and obviously Josh, too.”

The third-finishing Owens, who has six victories in his last nine starts, was glad to enjoy a consistent three-race stretch at a track where, until Tuesday, he hadn’t won since 2008.

“It’s great to bring the Ramirez (Motorsports) car home with three podium finishes here at Brunswick,” he said. “Heavens knows our performance in the past hasn’t been that spectacular here.”

The most serious yellow appeared on the 10th lap when Steven Roberts of Jesup, Ga., a heat race winner who ran third in the early laps, spun in turn one and slapped the wall to end his night. Tyler Erb was among drivers getting a piece of Roberts as Erb pitted to replace a flat left-rear tire.

Besides the lap-eight caution for Overton and Zeigler’s lap-38 yellow, a lap-nine caution appeared for a slowing Shanon Buckingham and a lap-22 yellow flag flew when Brian Shirley spun in turn three while battling Devin Moran for the seventh spot.

After a three-day break, the series resumes the Reopening Tour on Memorial Day at East Bay Raceway Park in Gibsonton, Fla., with three more nights of $7,000-to-win action. The driver earning the most points between Golden Isles and East Bay will receive a $5,000 bonus from Illinois-based Riggs Drilling Solutions, owner of Tanner English’s car.

Notes: Winner Josh Richards has fond memories of racing with Zeigler over the years. “Mason’s such a good kid, we had a conversation the other night, and I remember him from way back in the day running the “Z” car at Roaring Knob,” he said. “He’s come a long way.” … When Zeigler made his first Georgia-Florida Speedweeks appearance as a 17-year-old in 2010, it came behind the wheel of a former Ernie Davis-owned car wheeled previously by Richards. … Devin Moran was scheduled to start fifth in the main event, but he was late to the starting grid and forced to start on the tail. … Brandon Sheppard of New Berlin, Ill., who entered the night leading series points, scratched after time trials; he and two crew members were scheduled to catch a private plane flight to Minnesota for the weekend’s World of Outlaws Morton Buildings Late Model Series action at Jackson Motorplex. … Heavy afternoon rain delayed the evening’s hot laps as the track surface required a lengthy track-packing with the Lucas Oil helicopter joining in the track-drying efforts by hovering just a few feet above the track. … Russell Brown Jr.’s night ended in a plume of smoke in the first heat. … John Tweed of Greeneville, Tenn., got into the wall in hot laps and scratched for the rest of the night. … Vic Hill of Mosheim, Tenn., and Kerry King of Delmar, Del., entered the event but elected not to compete.