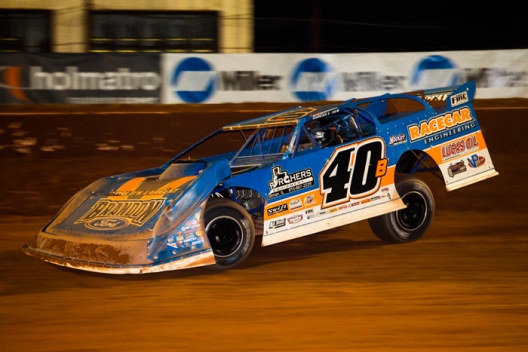 BRUNSWICK, Ga. — Slowing down red-hot Jimmy Owens was going to take both a fast race car and a little luck. Kyle Bronson had a lot of both.

Bronson, running third when Moran darted up the track and suddenly slowed, narrowly escaped. Second-running Josh Richards of Shinnston, W.Va., had nowhere to go and slid into the leader. Bronson tried to squeeze by on the top, but was collected as Moran drifted up the track. Bronson slid into Moran and slammed into the outside wall with his right rear before turning under and continuing on his way.

“It was kinda tough there,” said the 11th-starting Bronson, who took the lead when Richards pitted with a flat tire. “When Moran broke and Josh got into him, I kinda hit Moran and knocked the toe way out there. Today was one of them days where we had a pretty good car, but everything fell our way you know. I felt like we lost a bunch of races during (Georgia-Florida) Speedweeks when we had really good cars and things didn’t go our way. I felt like today, everything just fell in place.”

Richards wasn’t as fortunate. The contact with Moran flattened the right front tire on his Clint Boywer Racing machine forcing him to duck into the hot pit area for a fresh Hoosier. Bronson took over and soldiered on despite the body damage to the right side of his car. He led the final 10 laps for a $7,000 victory, the fourth Lucas Oil Series win of his career and first of the season. Richards, who started from the pole after winning the first heat, returned to the track and finished on the lead lap in 16th.

“I think Devin broke a J-bar or something happened there and Josh hit him,” added Bronson. “I thought they was turning off the top and I wanted to make sure if they wasn’t broke that I could get a good run there and I just kinda got crossed up and in the back of (Moran) and knocked the toe out. But like I said, the car was still pretty good and when I got in that clean air I was good enough that I could stay out there and maintain around the top.”

Erb restarted in second but couldn’t keep pace with Bronson, who put his car out front and was never challenged over the final circuits. The seventh-starting Erb, who won a Lucas Oil Series race at Golden Isles in 2019, settled for second, while Owens finished third, snapping the Tennessean’s three-race win streak. Owens won Tuesday’s Optima Batteries Golden Isles Nationals opener and had won six of seven races entering Wednesday’s event.

“The top was just so fast there,” said Erb, who started seventh. “At the beginning I made some time around the bottom. All them guys were kinda flirting with disaster there around the top and Kyle is really good at running that. Once he got ahead of me there on that restart, I knew I was kinda in trouble. You gotta get them guys on the restart. The second one, I got a little bit better restart, but I just couldn’t get back by him. Really I’m just happy to run second. (Tuesday) we were OK, run seventh or so. We’ve got to do a little bit better for (Thursday).”

With 15 laps remaining, it seemed Owens was primed or his second consecutive Lucas Oil Series victory. He'd made his way to second, where he lined up on the inside for a lap-25 restart behind the leading Moran. But Erb who restarted third, got a good jump and slid ahead of Owens, breaking his momentum and causing him to lose three vital positions.

“We tried some stuff to try to make the car a little better and made it a little worse,” Owens said. “The track definitely with all that rain water and stuff we got on it it never got slick. It was probably faster tonight than it’s been since we been here. We just missed it. We expected it to be a little slicker than it was and it wasn’t. It was just hammer down all night long.

“I thought we had a few close calls there, but it was just an aggressive track tonight. I hate everybody’s stuff got tore up like it did because you know the track wasn’t really that bad rough. It was just really, really wide open and demanding. If you come out of there without a blown motor or a wrecked car, you done pretty good.”

Notes: Bronson’s previous series wins came at his home track East Bay Raceway Park in Gibsonton, Fla. (2018); Fayetteville (N.C.) Motor Speedway (2019) and Raceway 7 in Conneaut, Ohio (’19). … The race was slowed by four cautions with the contact between Moran, Richards and Bronson among the two worst. On lap 31, Brandon Overton hit a rough spot, got into the wall and collected Tyler Bruening when he came back down onto the track. Both cars had heavy damage as the wreck sent drivers scrambling behind them. Cautions also waved on lap 25 (for a slowing Tanner English) and on lap 26 (when Max Blair stopped). … John Baker of Lakeland, Fla., made his Lucas Oil Series debut, subbing for fellow Floridian Mark Whitener in the No. 5. He finished 20th. … Series leader Brandon Sheppard started 18th and finished ninth. … Hudson O’Neal gained 12 positions after starting 23rd. … The Lucas Oil Series Optima Batteries Golden Isles Nationals continue Thursday with another $7,000-to-win event at Golden Isles.