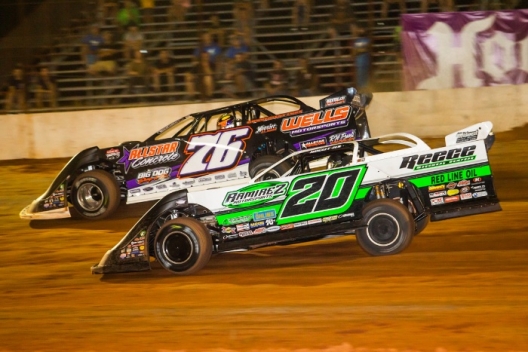 BRUNSWICK, Ga.— The guy who dominated the conclusion of February's Georgia-Florida Speedweeks got off to a not-so-surprising successful start in May's impromptu Speedweeks reprisal.

Jimmy Owens of Newport, Tenn., slipped by Brandon Overton on the 32nd lap Tuesday at Golden Isles Speedway and raced to a 40-lap victory worth $7,000 as the Lucas Oil Late Model Dirt Series ended a 100-day coronavirus-forced hiatus.

“It’s awesome,” said Owens, who earned two unsanctioned victories worth $10,000 the previous weekend at Magnolia Motor Speedway in Columbus, Miss. and 411 Motor Speedway in Seymour, Tenn. “The crew, everybody, we’ve been on a roll, busting our tails and just a lot of (highway) driving. To be able to be as fortunate as we are right now, you’ve gotta thank God and my family and my son and everybody. It’s pretty awesome.”

The fourth-starting Owens didn’t pass a car through the first half of the race, but he came alive in the final 10 laps, slipping under Overton and fighting off a last-ditch challenge from from the outside front-row starter in the final laps.

The winner was concerned that pre-race chassis adjustments had cost him, but he came through with his 65th career victory, second on the all-time series list.

“The car was a little bit freer than what I wanted and had a push. I had to rotate it a lot through the center (of the corner) than I wanted to,” Owens said. “We made a couple of changes right before the feature, and I felt like that really messed us up. But the car’s really, really good right now.”

Ninth-starting Mason Zeigler of Chalk Hill, Pa., boldly dove under Overton with two laps remaining to grab the runner-up spot while Overton, who led laps 1-8 and 10-31, settled for third. Josh Richards of Shinnston, W.Va., who started on the pole and led the ninth lap before giving the point right back to Overton on a restart, was fourth followed by eighth-starting Devin Moran of Dresden, Ohio.

Tim McCreadie, February’s Lucas Oil winner at Golden Isles, ran into trouble trying for his second straight victory at the 4/10-mile oval. The Watertown, N.Y., driver was running second and pressuring Overton just past the halfway point when contact with the slower car of Steven Roberts flattened McCreadie’s right-rear tire, knocking him from contention on the 23rd lap.

Zeigler, who broke into the top five on lap 23 after starting on the fifth row, had a few scrapes with the guardrail and competitors but ended up with a runner-up finish.

“I really need the top (position) on that (lap-33) restart,” said Zeigler, who overtook Richards and Overton in the final laps. “We went a little different on tires and them guys, I wanted to slide (job) them both, and both of them went from running the middle to coming down just as I was making the commitment (to pass low). It’s all good. Rubbin’s racing sometimes. I hope that no one was upset, but I talked to Brandon and they’re all good.

“The car was good. I wish we could’ve started a little bit further up front. Bryan and Buck and my whole crew have been working their butts off and getting this thing to where it needs to be. We’ve got a little bit of tweaking. We’ve gotta get a little better early (in the race program). … if I think we can get in the top four of five in the (opener), I think we’ve got a good chance at winning.”

Overton, who controlled most of the race after jumping into the lead from his front-row starting spot, said he didn’t finish with the car he started with.

“Right there, like in the middle of the race, I got into it with a lapped car, and it never drove the same after that,” Overton said. “Like it was kind of really, really tight getting in and I had to shear it, and then I'd just slide. But all in all, it’d been so good all night, I didn’t want to (change) much anyway. It was still good, like I said, until I got into it with that lapped car.

“You know, these guys are the best, the best in the business. Jimmy’s been hot, so congratulations to him and Zeigler. … The only way you’re going to get any better is to come race with ’em. We know we’ve got a really good car. We’re going to back and patch it up and see what all we’ve got bent on the left-front there and just try again tomorrow.”

Besides the lap-23 caution for McCreadie’s flat tire, the race was also slowed by three more cautions: when Brian Shirley slowed and retired on the ninth lap; on the 28th lap for Michael Norris; and finally on lap 33 for Hudson O’Neal.

Notes: Kyle Bronson was a scheduled front-row starter in the fourth heat but a broken driveshaft damaged his car’s rear end during pace laps, forcing him to scratch and take a provisional starting spot in the main event. He rallied to finish ninth in the feature … The most serious incident in the heats came when Shanon Buckingham spun coming to green in the second heat, piling up several cars; everyone was able to restart and Buckingham ended up transferring to the main event through a consolation race. … Pearson Lee Williams got into the wall in heat action when he broke something in the right-front corner. … Hudson O’Neal parked the car he drove in time trials pulled out his backup MasterSbilt machine for the remainder of the night. He used a provisional to start the feature but retired early with mechanical trouble.