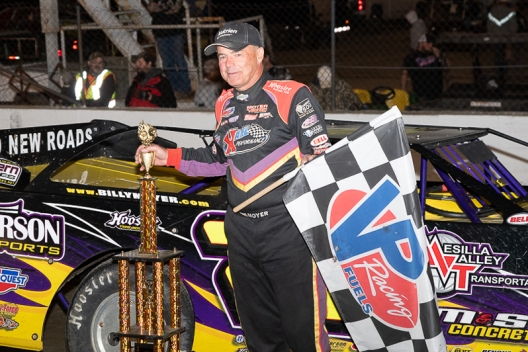 PEVELY, Mo. (May 9) — Billy Moyer didn’t take his uncle’s big-money challenge to win Saturday night’s Karl Chevrolet 50 from the rear of the field, but he still made his relative proud.

The Hall of Fame driver from Batesville, Ark. — and nephew of race sponsor Carl Moyer — kept his outside pole starting spot and made it pay off, rolling to a convincing flag-to-flag victory worth $7,000 at Federated Auto Parts Raceway at I-55.

Moyer’s evening would have been even more profitable if he had pocketed the $10,000 bonus his uncle posted for any heat winner who could capture the feature after forfeiting their starting position to take the green flag at the back of the 24-car field, but he played the odds in his first competitive appearance since February’s Georgia-Florida Speedweeks and rolled snake eyes.

“The way the track turned out, especially the last half there, it was pretty bottom dominant,” Moyer said after his first triumph of the coronavirus-hampered 2020 season. “So we did the right thing for sure.

“But I appreciate Carl for doing what he done,” he added, hailing his 78-year-old uncle’s generous sponsorship of a race that was contested amid the Covid-19 pandemic with a limited crowd of 700 fans and broadcast live on DirtonDirt.com and FloRacing. “He helped the racers and the fans by doing what he did with not only the bonus money, but putting the money in the purse to make it better. I just hope all the fans and drivers, everybody here, kind of remembers that when they go to buy a new car (at Karl Chevrolet in Ankeny, Iowa). They can go check him out. He’s got a heck of a store there.”

Moyer, 62, controlled the A-main with his Capital Race Cars mount after outgunning polesitter Jake Timm of Winona, Minn., at the initial start. He led every circuit around the third-mile oval, building as much as a 2.8-second advantage before the halfway point and only feeling pressure with four laps remaining when momentary trouble lapping Timm allowed Brandon Sheppard of New Berlin, Ill., to mount a last-ditch bid.

The 27-year-old Sheppard settled for a runner-up finish, 1.002 seconds behind Moyer after starting fifth in his family-owned XR1 Rocket car. Fourth-starter Devin Moran of Dresden, Ohio, was third in Tye Twarog’s Longhorn mount, Tanner English of Benton, Ky., climbed forward from the eighth starting spot to place fourth in the Riggs Motorsports XR1 Rocket and Kyle Bronson of Brandon, Fla., completed the top five in his XR1 Rocket after ceding fourth to English on a lap-36 restart.

The two heat winners who accepted the Karl Chevrolet Challenge and received $1,000 bonuses — Tim Manville of Highland, Ill., and Daryn Klein of Fairview Heights, Ill., who were scheduled to start fifth and sixth, respectively — never came close to reaching the front. Klein retired before the halfway point and was credited with a 22nd-place finish while Manville could only climb up to an 11th-place result.

With the track taking rubber and turning one-lane as the feature wore on, Moyer knew that only a miscue dealing with lapped traffic could cost him the race. He experienced a scare on lap 46 when he slipped slightly high entering turn one while lapping Timm and Sheppard ducked underneath him, but the all-time Dirt Late Model great managed to recover and turn back B-Shepp’s challenge.

“These cars are hard to see out of,” Moyer said. “I knew (Sheppard) was right there but I really could never see him. The lapped car, the 49 (Timm), kind of didn’t know which way he was gonna go there, and I started underneath him a couple times and I was like, ‘Ah, I better back up here, I’m gonna get my right-front into him and turn myself around.’ I finally got by him (on lap 48).

“The car was awesome and the racetrack was kind of bottom dominant. And Brandon, hell, he’s the number one racer on the charts, so I knew he’d use his head and we all made it through.”

Moyer’s first 2020 score after a quiet start to the campaign — his best finish in 10 races was a fifth on Feb. 2 at North Florida Speedway in Lake City, Fla. — also boosted his rising feelings about his No. 21 machine.

“Everybody here, it’s hard to explain what everybody’s went through, doing nothing and wondering if we’re gonna race again,” Moyer said of the nearly two-month shutdown of racing due to the coronavirus crisis. “To come out and be as dominant as we was … it’s all Marshall Green at Capital Race Cars and Shane Clanton (Capital’s flagship driver).

“I’ve never worked with anybody, with me, the way we have worked together with them, and it kind of shows here. We all put our heads together and come up with little ideas for everything. I mean, that there is probably the fastest car I’ve ever been in. That thing was bad.”

Sheppard advanced from the fifth starting spot to second by lap 15 when he overtook Moran, but he there wasn’t sufficient racetrack left for him to seriously threaten Moyer outside lapped traffic.

“We had a really goood hot rod,” said Sheppard, who made his first start since a World of Outlaws Morton Buildings Late Model Series doubleheader in Tennessee on March 6-7 driving the Rocket Chassis house car. “We were able to get up to second there before(the surface) latched down too hard, and then once I got to second I was kind of hanging on there.”

The opportunity Sheppard had to pass Moyer on lap 46 was only fleeting.

“The track was rubbered up at that point and he was behind that lapped car,” said Sheppard, who has three wins, two seconds, one third and one fourth in the seven starts he’s made this season with his family’s No. b5 (all his previous outings came in January’s Keyser Manufacturing Wild West Shootout at Arizona Speedway). “I got underneath him, but he was in the rubber and I was down in the dust and he took off. Then he got by the lapped car and that was all there was to it.”

The 25-year-old Moran, meanwhile, was satisfied with his podium run in what his first outing driving for Twarog since Speedweeks. He did return to action on May 2, however, behind the wheel of Alabaman Tommy Pope’s car at Boyd’s Speedway in Ringgold, Ga.

“It latched down,” Moran said of the surface. “The whole corner of three and four was (rubbered), and then we got a small little patch getting into one that latched down. I think the track was just so soft from all the rain they had (in preceding days), they had to seal it up.

“We’ll take the top three. To come out of this field with a top three at a track we don’t get to race a whole lot at, I’m just thankful for it.”

Four cautions slowed the race, none for multi-car incidents.

Notes: Moyer registered the 841st victory of his storied Dirt Late Model career. … With the track rubbering, Moyer’s fastest lap of the race came on the final circuit. … Sheppard was a runner-up for the sixth time this season, nearly matching his eight overall wins to date. … Brian Shirley of Chatham, Ill., slowed on lap four and pitted to change a right-rear tire but rallied to finish eighth. … Allen Weisser of Peoria, Ill., was the race’s first retiree after bringing out a lap-13 caution flag. … WoO rookie contender Kody Evans of Camden, Ohio, slowed to draw a caution on lap 36.

With a $10,000 bonus offered by sponsor Karl Chevrolet for any of the heat winners to win the feature from the rear of the field, two drivers decided to take the challenge: Tim Manville and Daryn Klein, who picked the fifth and sixth starting spots, respectively, in the 50-lapper. Manville and Klein are guaranteed $1,000 bonuses on top of their finishing positions if they don't win the race.