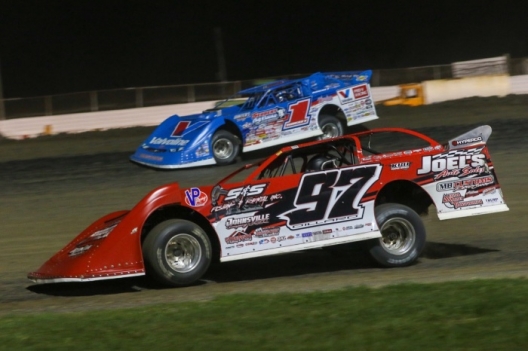 DAVENPORT, Iowa (July 28) — Brandon Sheppard continued adding to his lofty 2020 numbers on Tuesday night at Davenport Speedway — his second straight and 11th World of Outlaws Morton Buildings Late Model Series victory of the campaign, his third win in as many starts at the Hawkeye State track this season, his 19th overall triumph of this coronavirus-altered year.

But don’t for a minute think that the 27-year-old superstar from New Berlin, Ill., waltzed to the $10,000 checkered flag in the 50-lap feature contested on Davenport’s quarter-mile oval.

“I’ll tell you what, man, that was a tough race,” Sheppard said while wiping sweat from his face after his 66th career WoO victory. “I had to earn that one for sure.”

While Sheppard might have appeared primed to dominate the remainder of the distance after moving his Rocket Chassis house car past Cade Dillard of Robeline, La., for the lead on lap 19, he was far from home free. In fact, Dillard, a sophomore WoO traveler who has broken through this season with two big triumphs ($15,000 at New Mexico’s Vado Speedway Park, $30,000 at Lernerville Speedway in Sarver, Pa.), didn’t let B-Shepp get away.

Dillard, 29, regained the top spot from Sheppard on lap 36, ceded it back briefly on lap 38 and then returned to the front on the 39th circuit. He couldn’t stay there, however, as the irrepressible Sheppard rallied to burst by Dillard on the backstretch to assume command on lap 46.

Sheppard held on to beat Dillard to the finish line by 0.521 of a second. Just over a tenth of a second behind Dillard at the checkered flag was Jimmy Owens of Newport, Tenn., who closely tailed Sheppard and Dillard from the 10th lap onward and even nosed into second place on laps 15, 25-28 and 48 before settling for a third-place finish.

Jimmy Mars of Menomonie, Wis. — the builder of Dillard’s MB Customs Race Car — advanced from the 12th starting spot to finish fourth, about three seconds behind the tightly-packed lead trio. Chris Simpson of Oxford, Iowa, completed the top five, finishing in the same spot that he started.

Jeremiah Hurst of Dubuque, Iowa, was the race’s hard charger, advancing from the 23rd starting spot to finish sixth. He reached the position on lap 48 when he overtook Darrell Lanigan of Union, Ky., who fell to eight in the final rundown.

In race that included six lead changes among three drivers, Sheppard proved once again that he can never be counted out. He conceded, though, that he caught some breaks down the stretch to deny Dillard.

“I got pretty lucky there,” said Sheppard, who started fourth but ran among the top three for the entire race. “Cade got by me on the bottom (to take the lead on lap 39) and then the top started to get really clean all the way around there. I could just keep my speed up good enough to stay ahead of him (after regaining command on lap 46), and luckily we got the lapped cars there and I was able to get past a couple of them that were in my favor.

“I got into the 98 (Jason Rauen of Farley, Iowa) there a little bit (with about 10 laps remaining) … I didn’t mean to do that, but I didn’t expect him to be driving back by me when I was lapping him.”

Sheppard felt fortunate to come out on top of a memorable battle with Dillard and the 48-year-old Owens. He hailed both of his closest pursuers after the A-main.

“I wasn’t probably as good as I needed to be on the bottom,” Sheppard said. “But I was pretty close, and I was good enough to where I could get up there on the top and, when the top cleaned up, get rolling there.

“Cade’s been so tough this year and Jimmy has also, so as clean as we race each other, them guys are a lot of fun to race with. I really appreciate them guys for racing me clean, and they know that I’ll do the same with them.”

The victory also completed Sheppard’s sweep of the three WoO events held at Davenport in 2020. He previously won the track’s May 29-30 doubleheader, capturing the opening-night headliner run on the quarter-mile in a photo-finish over Ricky Thornton Jr. of Chandler, Ariz., and the finale on the sprawling half-mile layout.

“This racetrack has treated me pretty good, but it’s a fun track to drive,” Sheppard said, referring specifically to Davenport’s inner quarter-mile bullring. “You just don’t know where to go, you don’t know where the line’s gonna be. You can run the top or the bottom, whichever you can go in.”

Dillard attempted to run the extreme inside line to victory lane but fell short. The race’s polesitter used the low groove to take the lead for the first time on lap six from front-row mate Chad Simpson of Mount Vernon, Iowa, and was still racing down there when he swapped the top spot later with Sheppard.

“We had a really good car,” said Dillard, who flashed his 2020 strength by finishing between the WoO and Lucas Oil Late Model Dirt Series points leaders. “I couldn’t run around the top as good as (Sheppard and Owens) could. We were a little softer on tires, so at the end of the race I just wasn’t as good. Once the track got black I just tried to stay down in the mud and keep the thing going, not hurt it too bad.

“I’ll say it once again — it’s just an honor to be up here consistently with people like Brandon and Jimmy. They’re definitely the best in the business.

“We’ll keep working and hopefully we can outrun him here eventually,” he added of Sheppard. “But congrats to him. He’s by far one of the cleanest racers out there and I’ve got a lot of respect for them guys.”

Owens, who started in his Ramirez Motorsports XR1 Rocket car, couldn’t quite find the right opening to overtake both Dillard and Sheppard.

“It was a great race,” said Owens, who won last year’s mid-summer WoO event at Davenport that was run on the half-mile oval. “Those guys got the jump on me there and got in the lead. I could the run bottom a little bit, run the top, but when I was trying the bottom the top was just a little bit faster than it needed to be and that let me fall back a little bit.

“But I was able to maneuver. I felt like I was really good on the top, but by then Cade and Brandon both were in front of me and you just had to follow and wait on one of them to mess up … and they’re two talented guys, they ain’t gonna mess up.”

Three caution flags slowed the race. The first came on lap 24 when Scott Bloomquist of Mooresburg, Tenn., slowed with a flat left-rear tire while running well back in the pack. Rich Bell of Sheffield, Ill., spun in turn one on the lap-24 restart while Chad Simpson triggered a caution on lap 28 when he slowed with troubles that ultimately made him an early retiree after he led the feature’s first five laps.