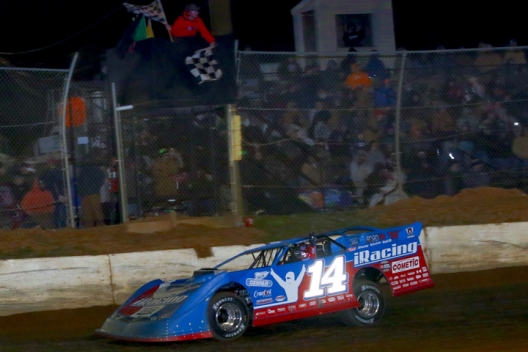 WHEEL, Tenn. — Josh Richards pumped his fist as he flashed under the checkered flag to complete a 50-lap World of Outlaws Morton Buildings Late Model Series triumph at Duck River Raceway Park on Friday night. In victory lane, the Shinnston, W.Va., driver climbed from his car and feverishly banged the roof in celebration. It was sweet emotion from an otherwise reserved driver. And well deserved.

Snapping a long victory drought on the World of Outlaws tour, Richards regained the lead from Dennis Erb Jr. of Carpentersville, Ill., on lap 16 and turned back a late challenge from Erb to capture his series-leading 77th career WoO win. Erb, who slipped by Richards to lead laps 3-15 before ceding the top spot back, ultimately settled for a third-place finish after losing second to third-starting Brandon Overton of Evans, Ga., on the final circuit.

Brandon Sheppard of New Berlin, Ill., advanced from eighth to finish fourth — his seventh top-five finish in eight starts this season — while Cade Dillard of Robeline, La., started fifth and held serve for his second top-five of the year.

Richards’s most recent World of Outlaws victory wasn’t as dramatic as his last, nor was it a record-setter. But it was deeply satisfying just the same. His last series win before Friday came on Oct. 28, 2016, at The Dirt Track at Charlotte and was his 18th of that season, a mark that, at the time, set a new WoO single-season win record. It also came aboard his father Mark’s Rocket Chassis house car, a team Richards left at the end of 2016.

“I left a good race team, a real good race team … a team I helped build,” said Richards. “But I’m proud of my guys. I’m proud of my team. We’ve got some new crew guys. Cody (Duncan) was with me when I was in my dad’s car for a few years. We won two championships. Big Dog’s (Brian Leonburg) been great and Brad (Ramsey) has been with me for three years now. We’re all just kinda gelling together and working together and it’s never easy.

“I feel like our car’s a lot better than what our results were in Florida (during Georgia-Florida Speedweeks). We didn’t qualify very good, but we always raced every night and went forward. So, this win means a lot. I’ve never doubted my ability. I felt like I had the ability to beat anyone at anytime. I’ve always had the confidence and this win gives you confidence, but it’s hard man. There’s so many little variables that people don’t see. They just think it’s the driver, but you gotta put it all together.

“Man I’m telling you, even when I was on the Outlaws side, everyone’s like, ‘Man the Lucas series is stouter,’ and I’m like, ‘You’re nuts. I don’t care … it takes the same to win on both sides.’”

Richards put it all together Friday. He qualified fourth in his group, won his heat and drew the outside front row starting position for the feature alongside polesitter Erb Jr. Richards continued to show his strength when he bolted into the lead ahead of Erb on the opening lap. He paced the first two circuits before Erb got rolling on the inside and pulled back by to lead lap three.

“I knew from the start where (Erb) was gonna be, you know. He’s just one of the best at running the bottom,” said Richards. “And that was a good judge for me to know how good the bottom was. I knew moving around I was able to judge off of him the first 10 or 12 laps and then I could move around on the racetrack.”

Erb, continuing his solid start to the season, grabbed the lead and pulled away. But he was feeling pressure from Richards on lap 13 when the first caution waved for a spin in turn two. On the restart, Erb stayed in front, but it his lead was short-lived as Richards drove around him and back into the lead lap 16.

“We were able to get going after a few laps there. After the bottom got cleaned up a little bit, we started rolling there pretty good,” said Erb. “Josh got a good start through the middle early, but we was able to run him back down. I knew the car was getting better and better and then that caution came out and that kinda messed things up. I would’ve liked to have seen it stay green.”

Richards did manage to pull away briefly, but Erb, who was trying to keep Overton behind him, was better the longer the race stayed green. He’d closed to within a car length of Richards when the last of three cautions appeared on lap 31.

“Once we started racing with somebody, (Richards) was able to drive away. I didn’t want to see that happen,” added Erb. “I was hoping to get a little better restart, but I kinda spun (the tires) coming off of (turn) four on that restart and that let (Overton) stay there with me and we kinda raced there for a little bit and (Richards) was able to pull away.

“We was able to get back there to him again and then he went back down there to the bottom the last 10 laps or so and pretty much had me blocked down there. The last lap or so I tried to roll into the middle. I thought maybe it would be able to hold me, but there were just too many crumbs there and we just slid up and that’s why we lost second.”

Richards said he knew Erb was closing the gap.

“I don’t know if the track changed or if the tires came and went, but there were crumbs that would shoot up through the middle,” Richards said. “Sometime it would have grip and then it wouldn’t and it was moving around. Towards the end of the race, I had just moved up to try to get my momentum built up and I kept watching my signal guy and he kept showing me gap (between he and Erb) and then all of the sudden, with like six or seven (laps) to go, he was like, ‘closing in, closing in.’ And I was like, ‘uh oh, gotta go back to the bottom,’ because I don’t know where anybody is. Luckily the car was good enough to maneuver and stay out front.”

While Richards was making sure to keep Erb at bay, Overton was there waiting, plotting what he hoped would be a winning move. He said the track’s inconsistency kept him on his toes.

“One lap you could run the same exact line you ran the lap before that felt really good and then you go back up there again and I guess (it was) just like the crumbs,” said Overton. “You’d hit it and spin the tires. Most of the time when I seen (a car) come back by me, I’d glance down and see the (yuke) tires were further and further in the infield. So they were just being able to get down there. I don’t know if it was Dennis or what, but guys kept clipping (the yuke tires) and that would let Dennis catch back up.

“If (the track) would’ve cleaned up, the bottom probably would’ve slowed down. But they keep beating them in and beating them in, so you really had to just watch. If somebody was coming by you on the bottom, you needed to hurry up and get down. Right there at the end, it was about to get good. I think the bottom was as slow as it could possible get, even though there was some brown down there, it was so tight, you really had to park to get down there and then the top and middle would’ve come back in. If it’d been like a 75-lapper, it’d been really good. I feel like any of the guys in the top three could have won.”

Notes: Josh Richards finished 1.167 seconds ahead of Brandon Overton, who was less than two-tenths of a second ahead of Erb. … Nineteen of the 27 starters finished. … Brandon Sheppard, who won last year's WoO stop at Duck River, went around the outside of Cade Dillard late in the race to finish fourth. ... Darrell Lanigan of Union, Ky., fished last after experiencing power steering pump trouble. … During prelims, Sheppard got a boon from a late restart in his heat as he went from third to second, to grab a redraw spot. “That definitely helped me out (starting) four spots better than where I would have,” said Sheppard. … Scott Bloomquist said he’s well on the mend following his off-season hip surgery. “If I sit in the car too long, (the hip) starts to get a little ache to it. Once they drop the green, you forget about it,” Bloomquist said. … Ashton Winger’s fast lap of 11.994 seconds during time trials is the third quickest lap on record at DRRP. Dane Dacus of Lakeland, Tenn., has the track record at 11.902 seconds set Sept. 30, 2017. … While Winger had been to Duck River before, it was this was his first time as a competitor. … Richards has 185 career WoO heat race wins. … Brian Shirley's night ended when smoke began to billow from the back of the Chatham, Ill., driver's car during prelims. ... Sam Seawright of Rainesville, Ala., was Friday’s 33rd entry. The late arrival climbed the wall during hot laps and missed prelim action. ... The WoO tour visited Duck River for the sixth time in series history to kick off a weekend doubleheader for the circuit in Tennessee.