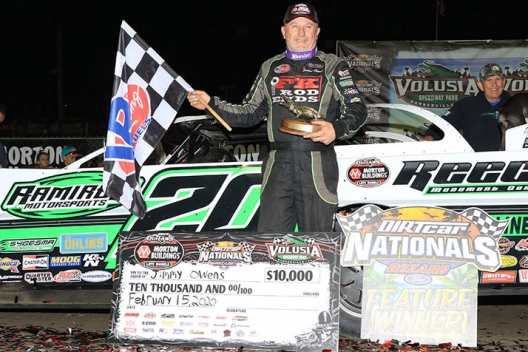 BARBERVILLE, Fla. (Feb. 15) — For Jimmy Owens, the third time was just as charming as the first. And the second. Owens entered the 2020 DIRTcar Nationals at Volusia Speedway Park 0-for-his-career in Late Model action at the venerable D-shape Florida half-mile. With the exception of a pair of open wheel modified victories there way back in 2004, Owens simply hadn’t had much luck at Volusia.

He changed that, however, with a remarkable 72-hour stretch that included three consecutive World of Outlaws Morton Buildings Late Model Series victories. The Newport, Tenn., driver punctuated his turnaround with a win in Saturday’s 50-lap, $10,000-to-win finale.

“It’s the best I’ve ever come out of Speedweeks,” said Owens, “with the Lucas Oil (Late Model Dirt Series) or with the Outlaws, just anything. We’ve struggle here. We’ve been up and down and I’ve struggled the whole Speedweeks (in the past) and this is by far the best Speedweeks I’ve ever had.”

Grabbing the lead from Kyle Bronson of Brandon Fla., on lap 40, Owens drove away to win his third feature of the week and his 18th career World of Outlaws main event. He finished 1.782 seconds head of Ricky Weiss of Headingly, Manitoba, who took the runner-up spot from Bronson with just a handful of laps remaining.

While he led flag-to-flag to win Thursday’s race and paced the field for 23 of Friday’s 40 laps, Owens had to work a little bit harder to capture Saturday’s finale as he led only the final 11 circuits.

“We was a little hard on right front tire,” said Owens. “We had actually just set the car up for late in the race and we was debating on changing and not changing it. We had it jacked up and down two or three times and finally we said let’s just go with what we started with. And, you know, it worked. We just bided our time and (were) patient and once the track slicked off it come to us.”

The seventh-starting Bronson settled for third after leading laps 15-39, while Darrell Lanigan of Union, Ky., who led laps 2-7 and 9-14, finished where he started in fourth. Brandon Sheppard of New Berlin, Ill., improved six positions to complete the top five after starting 11th.

Owens started on the outside front row — he started from the front row in all three victories — but on the opening lap he ran through a rough patch in turns one and two and shot up the track, allowing polesitter Kyle Strickler of Mooresville, N.C., to pull away, while Lanigan, Bronson and Jonathan Davenport of Blairsville, Ga., went by as well.

Strickler, making just his second career World of Outlaws start, led just one lap before giving way to Lanigan, who caught him as they raced down the backstretch and then drove by on the low side exiting turn four. Lanigan led 12 laps — Davenport actually slipped by him to lead lap eight — but couldn’t keep Bronson at bay.

The rim-riding Bronson flew by on the outside to lead lap 15 and set sail. Bronson was looking for a turnaround himself. He displayed an abundance of speed during Georgia-Florida Speedweeks — leading 67 laps and qualifying for all 14 events he entered — but had little to show for his effort — a best finish of second, only five top-fives and an average finish of 11th.

After grabbing the lead, Bronson, whose lone DIRTcar Nationals victory came in 2014, appeared to be on his way to his second. But in a race with only three cautions, traffic proved difficult for the hard charging Floridian. He gave up the lead to Owens on lap 40 and eventually fell to third.

“Third sucks,” said Bronson. “Congrats to Jimmy and Ricky on second. I felt like I was pretty good the whole race and when I got to them lapped cars I really couldn’t steer. I pushed my right front tire off probably by about lap 35. The last 15 laps I was kinda just hanging on there and I had to bend the car a little bit more than I’d like to ‘cause I couldn’t turn off the right front. That’s the way it goes, a little bit short and move on to the next one.”

Weiss was a quiet second place, improving one spot after starting third. It was a challenge to maintain however after he dropped back a bit early in the race. Weiss credited making a switch to his backup car for his late-week success.

“The guys never gave up. We just kept tweaking,” Weiss said of his team’s effort. “Sometimes you just gotta switch cars … you gotta switch it up a little bit and that’s what we did. Not to say that the other car (has) anything wrong with it.”

Weiss also shouldered the blame after being shuffled back at the start of the feature.

“I knew there would be a lot of different right front tires out there with them farming (reworking the track before the feature) it,” said Weiss. “I knew that I had the right tire at the end, but I just didn’t know if I had the right tire at the beginning. My fault, I just got in the middle of the track and slid up a little bit and had to make it tough on us to come through there. But the car was definitely fast at the end. I just needed to play our cards a little right.”

Notes: Brandon Sheppard of New Berlin, Ill., was crowned the DIRTcar Nationals champion after picking up two victories during the six-race stretch. Sheppard, who won four straight races to close out the 2019 DIRTcar Nationals, didn’t finish worse than sixth in the six features this year. … The race was slowed by three cautions — all for single car spins or stops — with the final yellow waving on lap 26. … Twenty-two of the 29 starters finished the race with 15 completing all 50 laps. … Jonathan Davenport was in contention early, but he pitted during a lap-10 caution with apparent rearend issues. … Polesitter Kyle Strickler, who had a lengthy battle with Sheppard for fourth, eventually faded to sixth, but was still pleased considering it was just his second WoO main event. Strickler won his first-ever WoO heat race on Saturday as well.

After winning his first career WoO heat race, Kyle Strickler’s night grew even better when he drew the pole position for the 50-lap feature. He heads into the headliner with his confidence riding high after struggling to get his Dirt Late Model up to speed. “I finally got the feel I was looking for,” said Strickler, who has won in UMP modified competition at Volusia. … Strickler’s heat triumph came after he recorded the fastest lap in his qualifying group but was penalized three spots because his car’s rear-deck height measured three-quarters of an inch too high. WoO tech director Kenny Kenneda said Strickler’s deck height exceeded the maximum allowance because a loose clamp on his car’s rearend moved. … Scott Bloomquist also absorbed a deck-height penalty after he captured his heat race, moving him from a top-four redraw spot to the 13th starting position in the A-main. Kenneda said Bloomquist’s problem resulted from the rubber on his droop-limiter chain coming apart. … WoO feature provisional starters are Chris Madden, whose DIRTcar Nationals struggles continued, and rookie candidate Ashton Winger. … Emergency provisionals were handed out to Boom Briggs, Matt Cosner, Kody Evans, Brent Larson and Blake Spencer.

Scott Bloomquist won the first heat, but was docked three positions when his car failed the tour’s quarter panel height rule, handing the heat win to fellow Bloomquist Race Cars campaigner Ricky Weiss. Mark Whitener was elevated to second, with Shane Clanton bumping up to third. On the start, outside front row starter Brian Shirley pushed getting into turn one and lost four spots on the first lap, then struggled getting into turn one on the next lap. He eventually finished fifth and must run a consolation race. … In the second heat, Jimmy Owens led flag-to-flag, winning by a second ahead of Jonathan Davenport. Brandon Sheppard finished third. … The third head was equally quiet as polesitter Darrell Lanigan jumped ahead of Mike Marlar and cruised to victory. … In the fourth and final heat, polesitter Dale McDowell jumbed into the lead at the start, but quickly gave way to Kyle Strickler, who slid ahead to lead lap one. Kyle Bronson, who was charging the inside, and Dale McDowell got together on the second lap, with McDowell spinning through turn four, collecting Logan Martin in the process. Martin’s car was taken off the track on the hook, while Bronson went on to finish second behind Strickler, who won his first career World of Outlaws heat. McDowell continued on to a seventh-place finish, despite a heavily damaged car.

The 49th DIRTcar Nationals presented by Bozard Ford — and Georgia-Florida Speedweeks — come to an end at Volusia Speedway Park on a Saturday that boasts pleasant conditions (partly sunny skies and an afternoon high in the low 70s). … Saturday’s roster numbers 45 cars, keeping the program at four heats. … Drivers who aren’t in action after calling an early end to their DIRTcar Nationals are Michael Norris, G.R. Smith, Allen Weisser, Ken Monahan and Ivedent Lloyd Jr. … Norris headed home to western Pennsylvania following a Friday-night outing in which he won his heat but faded in the feature before a scrape flattened his left-rear tire and spun him around in turn one. “I’m tired of being a heat-race hero,” Norris said on Friday night, frustrated that he wasn’t able to convert his heat win into a strong finish (his best finish in four feature starts was a seventh). “Our fun meter is pegged.” … Ricky Weiss of Headingley, Manitoba, will be back behind the wheel of the same car he drove to a seventh-place finish (he climbed as high as second) on Friday after his primary machine was sidelined by engine problems in hot laps. … With Jimmy Owens of Newport, Tenn., and Brandon Sheppard of New Berlin, Ill., each winning twice this week, it marks the first time since 2011 that a pair of drivers have recorded multiple victories during the DIRTcar Nationals. Hall of Famers Billy Moyer and Scott Bloomquist both captured two features that year.

The 49th annual DIRTcar Nationals draw to a close with Saturday’s 50-lap, $10,000-to-win main event at Volusia Speedway Park. It’s the sixth night for Late Models and the fourth night that the World of Outlaws Morton Buildings Late Model Series will sanction the action.

It’s been a long Georgia-Florida Speedweeks with only one rainout — the opener at Golden Isles Speedway in Brunswick, Ga., way back on Jan. 31 — and drivers are anxious to get Saturday’s show in the books so they can retreat home and turn their focus on the upcoming season. While Sheppard, Owens, Erb Jr., and Kyle Bronson of Brandon, Fla., have entered 13 of the 14 possible Georgia-Florida Speedweeks events — with all four making every feature race — Dan Stone of Thompson, Pa., is the lone driver to enter all 14.

Sheppard, the two-time and reigning WoO champion, leads the tour into Saturday’s DIRTcar Nationals finale. He's atop the standings, leading Darrell Lanigan of Union, Ky., by 34 points, while sitting 60 markers ahead of Ricky Weiss of Headingly, Manitoba.