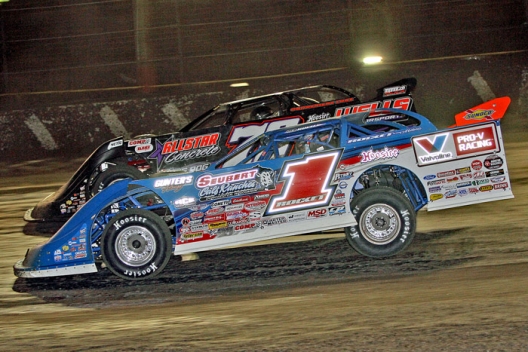 Sheppard, who crossed the line nine-hundredths of a seconds behind Erb, picked up his fifth Georgia-Florida Speedweeks victory and his first series victory of the season. The two-time and reigning WoO champion swept all four of last season's series races at Volusia.

Wednesday's top three finishers were supposed to go directly to postrace inspection after the frontstretch victory lane ceremony, but only Sheppard and apparent third-place finisher Darrell Lanigan of Union, Ky., did so. With Erb’s disqualification, Lanigan was lifted to second place, while Josh Richards of Shinnston, W.Va., was elevated to third. Jimmy Owens of Newport, Tenn., and Brian Shirley of Chatham, Ill., completed the revamped top five.

The penalty stripped Erb of what would have been his sixth career World of Outlaws victory and first since Nov. 4, 2017 in Concord, N.C., and solidified Sheppard's early-season points lead following his three runner-up finishes during World of Outlaws action at Vado (N.M.) Speedway Park last month.

“After the checkered flag, I pulled into the infield and went to their (World of Outlaws) box where they were checking,” Erb said. “I was waved on to go to the scales, so I looked at ‘em like, ‘I thought we were checking cars.’ Evidently we weren’t there, so I went to the scales.

“I passed the scales, went to the front straightaway and sat there and I even waited. No official, you know, came up to tell me what to do or where to go. So I just got in my car and drove up to my pit area. I mean, these guys … there’s one guy down there I guess and I guess he can’t handle, you know, coming around telling anybody what to do.”

Sheppard was as surprised as anyone when he found out he’d been awarded the victory.

“It’s definitely unexpected on my part for sure,” said Sheppard. “We had a really good car again tonight. We came up through there. We were battling with Erb there for the win. Obviously we didn’t cross the finish line in first though. And he did a really good job. Like I said, it’s totally unexpected and I feel really bad for him.

“He deserved it. He ain’t won one in a while. He’s been really good all week this week and I’m sure he’s gonna be good the next few nights too. It’s just unfortunate for him. Obviously this ain’t the way we want to win ‘em. I don’t even know what to say about it honestly.”

It was a chaotic ending to an equally chaotic race.

Erb, who led the first two laps, reclaimed the top spot on lap 33 when Mark Whitener of Middleburg, Fla., and Brandon Overton of Evans, Ga., — both seeking their first career DIRTcar Nationals victory — banged hard off of each other while battling for the lead.

Overton, who officially led laps 27 and 28, gave up the lead but never lost touch with Whitener. Battling back, he slipped under Whitener to draw even in turn two on lap 32. The two drivers made contact on the back straightaway, with both getting sideways amid a plume of tire smoke.

Overton’s subsequent entry into turn three carried him up the track a bit, while Whitener, with his left rear tire going down, drove hard into turn four, slid up the track and slammed into the side of Overton’s car.

Erb ducked below the crash and beat Sheppard, who had checked up slightly to avoid the melee, back to the line before the caution was displayed, putting him out front for the restart. He then led the final seven circuits, rotating carefully around the inside hub, while Sheppard tried to run him down.

Sheppard, Monday’s DIRTcar Nationals winner, closed in with two laps remaining and then used a patented high-side charge to make one last bid to overcome the low-running Erb, who held off the defending series champion at the line.

“The racetrack was really good for us tonight,” Sheppard said. “We were racing all over this thing. I think at one point we were like four-wide for the lead there and it was pretty crazy. Whitener and Overton getting together there, that was out of nowhere and I was trying to avoid that and Dennis slipped by me there. After they ended up wrecking each other, the caution came out and then Dennis held control after that.”

Erb and Sheppard were among seven drivers slipping in and out of the top five on a surface that offered more than its share of side-by-side racing. Whitener, who took the lead on lap three, paced the field for nearly a dozen circuits with Erb in tow until the second-starting Overton flashed by Erb and ran down the leader.

On lap 15, Overton closed in on Whitener’s rear deck, but didn’t make a bid for the lead. Erb slipped back to fourth when Jimmy Owens went by on lap 17. When they zipped under the flagstand at the halfway mark, Whitener led by a half-second.

Erb, never wavering from the low groove, retook third on lap 22. Four laps later — when the race’s first caution appeared — Erb was back to second, with Overton third, followed by Lanigan and Sheppard. It was Overton who took the lead on the restart, however, nipping Whitener at the line to complete lap 27. But after leading lap 28, Overton succumbed to Whitener’s advances on the next circuit.

As stout as the home-state driver’s car was, however, he never managed to fully break away from his pursuers and just seven laps from the finish both his and Overton’s hopes were dashed.

Notes: One night after Tim McCreadie of Watertown, N.Y., won his seventh career DIRTcar Nationals feature to move into a tie with Brandon Sheppard on the all-time win list, Sheppard won to record his eighth and move into a four-way tie for fourth overall. Sheppard joined Wayne Shugart of St. Augustine, Fla., Jack Boggs of Grayson, Ky., and Don O’Neal of Martinsville, Ind. … Billy Moyer of Batesville, Ark., sits atop the list with 19 Volusia DIRTcar Nationals victories. … Runner-up Darrell Lanigan said while the track was racy, the bottom is where he needed to be. “We were so good around the bottom there at the beginning I (thought), ‘man I hate to get out of this bottom.’ I was hoping them guys would just slow up a little bit at the top and I’d get back by ‘em.,” he said. “I tried that middle to the top once and let Sheppard get back by me.” … The race was slowed by three cautions. Along with the Whitener-Overton melee, Stormy Scott stopped on lap 26 and Ricky Weiss slowed on lap 30. … Twenty-six of the 30 starters completed the race, all on the lead lap. … The 49th annual DIRTcar Nationals continues Thursday with another $10,000-to-win World of Outlaws Morton Buildings Late Model Series main event.

Feature polesitter Dennis Erb Jr. has one career DIRTcar Nationals victory, a World of Outlaws event in 2012. He enters the evening with finishes of third on Monday and fourth on Tuesday. … Outside polesitter Brandon Overton has never won at Volusia, but he comes into the week hot off two unsanctioned victories worth a combined $30,000 at Screven Motor Speedway in Sylvania, Ga. … Floridian Mark Whitener starts fourth in the A-main after capturing his first-ever WoO A-main. A fifth-place finisher in Tuesday’s feature, Whitener’s crew was working before the feature to add restrictors to his carburetor to tune down the engine in expectation of a slick track surface. … Scott Bloomquist nearly missed his B-main for the third straight night; his crew, including his business partner Cody Sommer, spent the moments before the call to line up the last-chance races scrambling to finish carburetor work. … There was some craziness in the upper Dirt Late Model pit area following the third heat when a Johnny Scott crew member, apparently taking umbrage to an on-track scrape between Scott and G.R. Smith, drove his four-wheeler into the right-side door of Smith’s car near the WoO operations trailer. A brief scuffle between crew members reportedly ensued before law-enforcement officers on the grounds responded to the scene. “There were cops all around,” said Michael Norris, who starts 18th in the feature and is parked in the pit area near Smith and Scott. … Donny Schatz’s night came to an early end due to terminal engine trouble that forced him to scratch from his heat. … The 30-car feature field includes provisional starters Scott Bloomquist, Rick Eckert, Matt Cosner, Brent Larson, Blake Spencer and Ivedent Lloyd Jr. … After WoO officials counted drivers’ two best finishes in the four WoO events during the lst two DIRTcar Nationals, this year points will be awarded for every night.

The superb Speedweeks weather continues for the first night of DIRTcar Nationals action sanctioned by the World of Outlaws Morton Buildings Late Model Series with partly sunny skies and afternoon temperatures rising well into the 80s. … Wednesday’s 51-car field is up three from Tuesday night with the return of Chalk Hill, Pa.’s Mason Zeigler (he skipped last night’s program to relax away from the track with his family and crew) and the additions of Earl Pearson Jr. of Jacksonville, Fla., who will attempt to right his struggle-filled Speedweeks in the Black Diamond house car, and Steve Hucovski of Corcoran, Minn. … Brandon Sheppard of New Berlin, Ill., and his Rocket Chassis house car team changed motors after his runner-up finish in Tuesday night’s feature. They discovered a potential issue during their post-race maintenance and decided to bolt in a fresh powerplant as a precautionary measure entering WoO points action. … G.R. Smith of Cornelius, N.C., has a backup engine in his Brodnax-Shaker Motorsports machine after a leaking front seal on the motor caused him to fall from a transfer spot in a B-main. “This is too damn much work for your birthday,” quipped engine builder Randy Clary, team owner J.C. Clary’s uncle who is celebrating his 65th birthday. Smith’s team also put new right-side sheet metal on the car for Wednesday’s competition. … Blake Spencer of St. Augustine, Fla., will drive the same XR1 Rocket car that sustained bodywork damage in a Tuesday heat, but he had his second machine out of the trailer on Wednesday as well. Tyler Erb of New Waverly, Texas, is scheduled to drive Spencer’s backup in the week’s final three WoO shows. … Tyler Millwood of Kingston, Ga., is racing on his 29th birthday. … Darrell Lanigan of Union, Ky., slowed in hot laps with damage to the left-front nose of his Barry Wright house car.

Following two nights of DIRTcar Late Model action, the World of Outlaws Morton Buildings Late Model Series takes center stage Wednesday at Volusia. It’s the first of four nights for the tour and high-speed Florida half-mile. Drivers will chase a $10,000-to-win purse for the rest of the week.

It’s the fourth race of 2020 for the national tour, which kicked off its season for the first time at Vado (N.M.) Speedway Park back in early January. Chris Madden of Gray Court, S.C., Ricky Weiss of Headingly, Manitoba, and Cade Dillard of Robeline, La., were winners at Vado, but it’s defending series champion Brandon Sheppard of New Berlin, Ill. — thanks to three straight runner-up finishes in New Mexico — who leads the tour into Volusia.

With 51 Late Models signed in on Wednesday, there will be group qualifying, six heats (transferring three from each), three consolations (transferring two each) and a 40-lap main event. Super DIRTcar Series big-block mods are on the card as well.