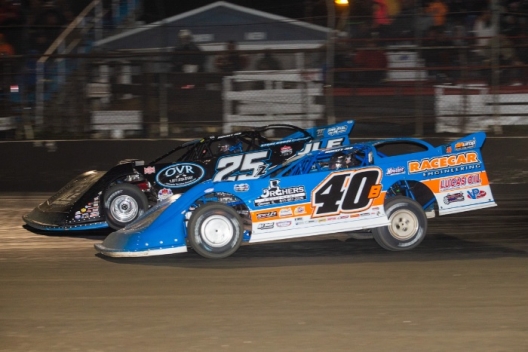 Then Mason Zeigler came from nowhere to steal the show and the $12,000 winner’s purse.

Restarting fifth with nine laps remaining, the 27-year-old Chalk Hill, Pa., driver utilized the middle groove against his cushion-riding foes, taking third from Erb on lap 43, grabbing second from Sheppard on lap 46, and finally unseating Kyle Bronson for the top spot on lap 48.

Bronson clawed back to slip back ahead and lead lap 49, but Zeigler dove under Bronson twice on the final lap, crossing the flagstand six-hundredths of a second ahead of the home-track standout for his second career Lucas Oil Late Model Dirt Series.

After a series of burnouts heading for victory lane, Zeigler climbed out of his car with a helmet toss and celebrated his first victory at East Bay since his 2016 triumph in the Winternational finale.

“We went a little different on setup tonight and we were really banking on a late caution. The track just came right to us. We’ve been struggling a little bit all week … my crew just never gives up on me. I can’t thank them enough,” Zeigler said. “I’ve (made) quite a few mistakes this week and it really costs us big time on top-five runs, but I think we finally got the bugs worked out. … We got started a little late and didn’t get to test or nothing, but I think we’re good to (go) now.”

Bronson, the driver from nearby Brandon, Fla., who took the lead from Sheppard, on the ninth circuit, bent his car nearly sideways trying to squeeze back under Zeigler at the checkers, falling just shy. He settled for his second runner-up finish of the week while New Berlin, Ill.’s Sheppard, the week’s lone two-time winner, was third. Erb, of New Waverly, Texas, was fourth and Jonathan Davenport of Blairsville, Ga., rounded out the top five.

Zeigler started seventh but with the lead trio pulling away from most of the field after Bronson took the lead, he wasn’t seriously in contention, particularly during a 25-lap stretch of green-flag racing — the longest stretch of the week. But on the lap-42 restart, Zeigler came alive and quickly became a threat to the top three with Bronson still out front.

“I knew (Bronson) was going to be tough because that cushion was still pretty good up there,” Zeigler said. “The cautions really helped me because their tires were getting a little cool and I could just work that middle (groove) real good. I knew if I could just get ahead of him and clear him and take his nose getting into (turns) one and two there, we could drive away.

“Man, he gave me all I wanted. I didn’t expect that slider. I didn’t think he’d be able to pull up alongside me again, and he sure as heck did. We just had barely enough room there. I did everything I could not to door him or nothing … it’s just hard-core racing. This place is elbows up and get after it. We’re just happy to come out here and put on a show.”

Bronson, who has contended all week but been held back by a tangle (Monday), a backstretch spin (Tuesday) and a car-destroying frontstretch wreck (Wednesday), fell short again. He said Zeigler’s choice of a more durable right-rear tire played a key role.

“At the end there when we fired up with (nine) laps to go, I knew my tire was done. I drove as hard as I could, I felt like, without putting it into the fence,” Bronson said. “Mason did a damn good job. He raced me hard. He raced me clean. I wasn’t going to wreck him as clean as he raced me. That’s all I could do to hold him back … I just couldn’t beat that tire. He did a good job.

“I’d just like to thank my guys. This week we destroyed that car. We put this (backup) car together here and come back and raced last night. I let ’em down last night, my head was a little messed up. But I feel pretty good now. I’ve got some momentum going. Hopefully we’ll go and win us $12,000 tomorrow.”

Sheppard led the first nine laps and stalked the high-running Bronson most of the way before failing to turn back Zeigler’s charge.

“Every time I tried to move down, I wasn’t any good, but it was because I was overheating my tires, I think,” Sheppard said. “I think Mason had a little different tire than we did on, and that probably helped him get down there in the black. Once Kyle passed me there I was just kind of just riding behind Kyle because I wasn’t good enough on the bottom to pass him. So I knew he was going to have to make a mistake or something for me to be able to get by him. All in all it was a really good night for us.

“It was a heckuva race. Congratulations to Mason, he really did a good job and deserves, and Kyle for coming back from his crash the other night. I’m glad he’s OK. It’s been a good week so far. We’re hoping to keep it going tomorrow."

The Wrisco Winternationals wrap up Saturday with another $12,000-to-event. MavTV will have live coverage beginning at 7 p.m.; hot laps are scheduled for 5:30 p.m.

Notes: Zeigler’s previous victory came Aug. 17 in World of Outlaws Morton Buildings Late Model Series at Port Royal (Pa.) Speedway, a race with another dramatic finish as Zeigler edged Ricky Weiss of Headingley, Manitoba. … Sixteen of 30 starters finished on the lead lap. … Tanner English of Benton, Ky., rallied from 19th to finish eighth. … Earl Pearson Jr. started on the tail (rather than 22nd) because his rear deck was too high in pre-feature tech inspection. He retired in 23rd.

Correction: Fixes the reason for the demise of Richards.

Tyler Erb starts from the pole position in his bid to reach victory lane for the first time this year. He won twice during the 2019 Winternationals and has contended multiple times this week but hasn’t broken through. … Jonathan Davenport cruised to victory in the third heat driving his new Longhorn car, raising his hopes for a decided rebound from his subpar 16th-place finish in Thursday’s feature. … All six heat winners are former Winternationals feature winners. … G.R. Smith’s rough heat-race run included a spin into the inside wall in turn one and a broken driveshaft that knocked him of action. … Brent Larson had a short night, scratching from further competition after hurting his motor in a heat race when he lost oil out of his car’s tank. … With this year’s Lucas Oil Series Speedweeks points-accumulating system counting the five best finishes of drivers with perfect attendance for the season-opening stretch, tonight’s sixth feature of Speedweeks means the standings will begin to tighten as racers start dropping their worst finishes.

Driver (car no.), hometown
Group A

After Thursday’s program beat the approaching rains — strong storms hit the track about an hour after the feature checkered flag — conditions have turned decidedly cooler for Friday’s Round 5 of the Wrisco Winternationals. Skies have cleared but the air is brisk with a high temperature only reaching the low 60s this afternoon. … Thursday was the last Winternationals action for Georgia drivers Brandon Overton and Donald McIntosh, both of whom departed the track — Overton to run this weekend’s unsanctioned Winter Freeze doubleheader at Screven Motor Speedway in Sylvania, Ga., McIntosh to head home. … Jonathan Davenport of Blairsville, Ga., is ready to hit the track with a brand-new Longhorn Race Car that arrived in the East Bay pit area directly from Longhorn’s Trinity, N.C., shop just before the start of Thursday’s consies. … Vic Hill of Mosheim, Tenn., is sitting out a second consecutive night of competition. His reason? “Too cold,” said the driver and engine builder, who plans to race Saturday’s finale. … Tim Dohm of Cross Lanes, W.Va., is also keeping his car parked for the second night in a row because he’s still not feeling 100 percent after coming down with a sickness. … Another driver on the sick list, Ken Monahan of Lakeland, Fla., will return to the cockpit this evening after an illness kept him from racing on Thursday. He visited a doctor on Friday morning and received a steroid shot and antibiotics to help him on the road to recovery. … Brian Birkhofer of Muscatine, Iowa, will get his turn behind the wheel of fellow Iowan Jason Rauen’s car, which has had its doors changed to Birky’s familiar No. 15B after Rauen ran it with his No. 98 the last two nights. Birkhofer will make his first start since 2007 at East Bay, a third-mile oval of which he said: “It’s not my cup of tea.” … After struggling to find speed for the first three nights of the Winternationals in his new XR1 Rocket car, Colton Flinner of Allison Park, Pa., on Thursday brought out his older machine in which he had several strong runs last year at East Bay. The battle-tested car was sidelined by a broken push rod in its engine during time trials, forcing him back to his new mount tonight. … Lucas Oil Series director Rick Schwallie said during Friday’s drivers’ meeting that deck heights on cars will be checked before time trials and the feature as officials did on Thursday. … Schwallie’s daughter, Addison, celebrated his ninth birthday at the track on Friday. The youngster was presented a cake in the tour’s operations trailer during the afternoon. ... Brandon Sheppard of New Berlin, Ill., will have the orange spoiler on his Rocket Chassis house car this evening, marking him as the Lucas Oil Series points leader. He now simultaneously tops the Lucas Oil and World of Outlaws Morton Buildings Late Model Series points standings. … Notable coincidences in Friday’s qualifying draw: Riggs Motorsports teammates Tanner English and Jason Riggs are the first and last drivers, respectively, scheduled to hit the track for time trials, while Billy Moyer and his son, Billy Moyer Jr., have consecutive qualifying positions in Group 2.

After clicking off his second victory Thursday at East Bay, Brandon Sheppard of New Berlin, Ill., is trying to match Jonathan Davenport’s three-victory total from last February's Wrisco Winternationals in Friday's fifth round of action.

Sheppard is a two-time winner — and current Lucas Oil Late Model Dirt Series points leader — after Tuesday and Thursday victories. Other winners have been Devin Moran of Dresden, Ohio, on Monday and Tim McCreadie of Watertown, N.Y., on Wednesday.