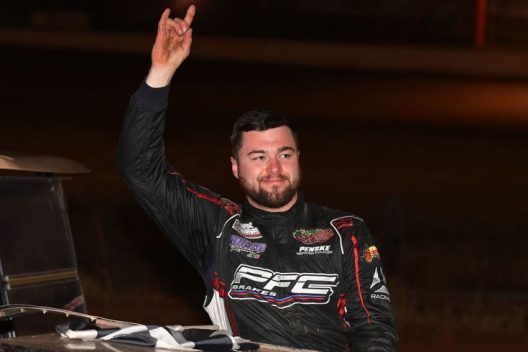 SYLVANIA, Ga. — Brandon Overton made no bones about it. Before Friday’s Winter Freeze X opener at Screen Motor Speedway, the Evans, Ga., driver told DirtonDirt.com pit reporter Dustin Jarrett that the 3/8-mile oval located just 60 miles northwest of Savannah was his favorite track. Then he promptly went out and showed everyone why.

The victory was Overton’s first since joining Hazard, Ky.-based Wells and Sons Motorsports last November and his fourth special event win at Screven in a 17-month stretch dating back to Sept. 18, 2018, when he won a Southern All Star event and later backed that up with an Ultimate Southeast Series triumph in November ’18.

“I love coming home,” said Overton in victory lane. “I don’t know what it is. When I drive through that gate up there I have like, no stress, you know what I mean. Everybody comes and hangs out and everybody’s cooking and hanging out. I don’t know, I just love it. I see all my family and all my friends.”

From outside the front row, Overton got the jump on Bailes on the opening lap. He said his first-lap move was key, as was his opening-lap pass in his heat, when he edged ahead of Jimmy Sharpe Jr., a move that set up his heat victory which in turn determined his front-row starting position for the main event.

“It’s way easier to lead these things that it is to pass,” said Overton. “If you look at that qualifying, man, I think it was like, what, 14.7 (seconds) was the pole? Everybody’s so close. There’s only 26 cars, but there ain’t a bad one in the pits. It’s just people missing it, or not having it all the way right. It’s just so competitive now. If you can get up front, sometimes the tracks around here dictate that.

“That’s the name of the game … beat ‘em to the first corner. I didn’t want to start on the inside pole. I was kinda glad I was on the outside pole because I probably would’ve had to pass Ross or I would’ve had to slide Ross getting into turn one. I felt like if we would’ve been door-to-door, then he would’ve slid me. But he didn’t fire it off in there because he knew it wasn’t clear, so I appreciate him running me clean and I’ll remember that.”

Bailes chased Overton early before allowing Ferguson to take the second spot near the halfway point. He reclaimed the position on lap 34, just two laps after Ferguson ran up the hill in turn three, jumped the cushion and brushed the wall, damaging part of his spoiler. After staying close to the leader early, it became increasingly difficult to do so as the race wore on, especially following the final caution, which gave them 18 green flag laps to the finish. Bailes, making his first start in Augie Burtram’s Big Frog Motorsports No. 58 conceded that he’d been outrun by one of Screven’s best.

“We were hitting on all cylinders in qualifying. And we were good in the feature,” said Bailes. “We just … the track changed and I feel like in the heat race the track was a little bit slicker and we were better in that condition. We’ve got to work on it a little bit. That guy there (Overton), he’s about the best at this track and then the guy behind me (Ferguson) is about the best or second-best so it feels good to be in between ‘em.”

Ferguson felt like he’d finally put himself in position to challenge Overton when he slipped up. Overton has caught a pair of slower cars battling each other. But while the leader carefully tried to maneuver through, Ferguson’s miscue kept him from taking advantage. Just as that happened the feature’s sixth caution appeared.

“That was about to get fun,” said Ferguson. “We were three-wide with a lapped car and I stuck it in the fence so they all kinda checked up. Anytime you can keep up with Brandon here it’s a positive and as good as Ross has been running. It’s fun to race with these guys. I think we had a shot there, but you know, it didn’t play into our cards tonight. But it was fun.”

Overton was thankful he dodged the bullet.

“It was close,” he said. “I was definitely right there squeezed in. It’s hard to see your spotter here really until you’re under caution, so I don’t know how far ahead I am. I just didn’t want to let … I didn’t want to have to try to pass them back you know what I mean. If I filled the hole, they weren’t gonna be able to pass me, so I just stuck my nose in there.

“And like I said, I seen them coming together and I just let out (of the throttle). There wouldn’t have been nowhere else to go for anyone else either. That’s all I was doing there. I think one of them was sideways and one of them was pushing across the bottom in all that mud.”

The race was slowed by six cautions, the most serious for a three-car pileup on a lap-17 restart involving fourth-starting Darrell Lanigan of Union, Ky., along with Ahnna Parkhurst of Evans, Ga., and Brian Connor of Martinez, Ga. Lanigan’s Barry Wright Race Cars house car sustained heavy body damage and was towed off the track, as was Parkhurst’s, while Connor soldiered on to a 12th-place finish.

Other cautions waved on lap two when Lanigan slowed in turn two after getting crossed up on the frontstretch; lap three when Kyle Hardy of Stephens City, Va., spun in turn two; lap eight for the ailing car of Brian Nuttall Jr., of Claxton, Ga.; lap 17 for Tyler Millwood of Kingston, Ga.; and lap 32 for Dustin Mitchell of Pine Level, N.C.

The first call for the Super Late Model feature drivers to head to staging was made at 10:22 p.m. EST. … All four heat winners are in new rides so to speak. Three of them — Ross Bailes, Brandon Overton and Darrell Lanigan — are competing with new teams, while the other — Jason Covert — is in a brand new Rocket XR1. … Bailes is driving Augie Burtram’s Big Frog Motorsports No. 58, a machine he plans to chauffeur a handful of times in 2020. … Kyle Hardy of Stephens City, Va., will start from the fourth row after a runner-up finish in his heat. Hardy finished second in last year’s Winter Freeze IX finale. … There are only five drivers in Friday’s feature (Overton, Covert, Hardy, John Henderson and Brent Dixon) who were also in last year’s weekend finale. … With just 26 cars on hand the night growing long, race director Kelley Carlton said there was “no way” he was running a consolation race. Each competitor is slated to start the $10,010-to-win main event. … Carlton said track crew fell behind today while trying to diagnose issues with the track’s malfunctioning scoreboard. They never managed to get it repaired. … The program was also slowed as a number of Super Late Model drivers were running late getting though pre-race technical inspections. They’re were joined Friday by 35 602 Crate Late Models and 15 604 Crate Late Models. … The pit area is also brimming with cars preparing for Saturday’s Sport Compact Dirt Racing Association main event. More then 100 entries are on hand for the $15,000-to-win affair.

Polesitter Ross Bailes got the jump on fellow front-row starter Chris Ferguson on the opening lap of the first heat and eased away to win by two car lengths. … The second heat was a battle of northeastern drivers as Pennsylvanian Jason Covert and Virginian Kyle Hardy traded sliders over the first two circuits before Covert finally took control. … Brandon Overton slid by Jimmy Sharpe Jr. in turn two on the second lap of the third heat and cruised to a convincing win. Overton finished nearly a straightaway ahead of Sharpe, with Gregg Satterlee not far back in third. … In what was easily the best heat of the night, Darrell Lanigan and Trent Ivey battled door-to-door in the fourth prelim with neither giving an inch unit Ivey had to check up in turn one on the final lap, allowing Lanigan to scoot away. Until then, it was anyone’s race as Lanigan worked the outside and Ivey peddled around the hub. They swapped the lead — and a little paint — until Lanigan managed to break away.

Blue skies were prevalent Friday afternoon and temperatures peaked in the upper 50s, but with the wind gusting near 20 MPH at times, once the sun went down, there’s a decided nip in the air. Forecasts call for temps to dip into the mid-30s overnight, making sure Winter Freeze X earns its name. … Trent Ivey of Union, S.C., and Casey Roberts of Toccoa, Ga., were the quickest drivers in hot laps — at least among those with a registered time. Brandon Overton of Evans, Ga., and Brian Nuttall Jr. of Claxton, Ga., practiced but the transponder didn’t pick up their times. … Overton was at East Bay as well. Winner of one of the features during Winter Freeze IX, Overton could hardly pass up an event at his home track. Overton has three wins at Screven in the last two seasons. Along with last year’s Winter Freeze opener, Overton scored a Southern All Stars victory here back in September 2018 and followed it up with an Ultimate Southeast Series triumph in November ’18. … Jason Covert of York Haven, Pa., is debuting a new Rocket XR1. He sat in the car adjusting his seat belts Friday afternoon, the first time he’d been back in the car since mounting the seat. Covert plans to head back home after running Friday and Saturday. … Brian Connor of Augusta, Ga., is making his first start of the season. “I’ve been busy with other stuff. Almost too busy to work on this thing,” said Connor, who recently started his own sign business. Connor said his new venture has been booming, though he said he doesn’t do very many race car graphics. … Greg Oakes of Franklinville, N.Y., is among the drivers who left Florida’s East Bay Raceway Park and made their way six hours north to Screven. “We decided to take (Thursday) night off and save our stuff,” said Oakes. “We will probably run these two nights if tonight goes OK, and then head home.” … There have been seven different winners in dozen Winter Freeze feature events. Overton and Darrell Lanigan of Union, Ky., are the only two former winners in attendance. … Ahnna Parkhurst of Evans, Ga., is pulling double-duty, adding the 604 Crate Late Model event to her agenda.

Friday’s opener of Screven Motor Speedway’s Winter Freeze X, which features a 50-lap, $10,010-to-win unsanctioned Super Late Model race, will be the 13th Georgia-Florida Speedweeks event Screven has hosted over an eight-season span. It marks just the second time the event has been unsanctioned as 11 of the previous 12 events were sanctioned by the World of Outlaws Morton Buildings Late Model Series.

Brandon Overton of Evans, Ga., and Shane Clanton of Zebulon, Ga., were winners of last year’s Winter Freeze IX. Overton made the trip to Screven from East Bay Raceway Park, where both he and Clanton were competing in the Lucas Oil Late Model Dirt Series-sanctioned Winternationals at the Gibsonton, Fla., oval this week. Clanton, however, who leads all drivers with four Georgia-Florida Speedweeks wins at Screven, stayed at East Bay as he plans to follow the Lucas Oil tour this season.

Friday’s program will include hot laps, time trials, heat races, consolations and the 50-lap, $10,010-to-win main event. Crate Late Models are among other divisions that will be in action. Watch live video coverage of the weekend doubleheader at DirtonDirt.com.