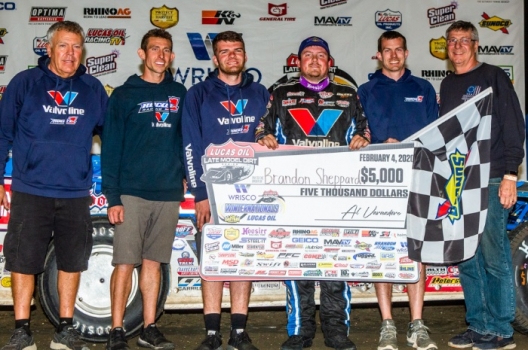 GIBSONTON, Fla. — After a rough opening night when he spun out of contention, Brandon Sheppard of New Berlin, Ill., rebounded in a big way Tuesday at East Bay Raceway Park’s Wrisco Winternationals.

The Rocket Chassis house car driver led all but one lap to earn $5,000 for his 15th career Lucas Oil Late Model Dirt Series victory as he took the checkers nine-tenths of a second ahead of 13th-starting Brandon Overton of Evans, Ga.

“It seems like it’s been forever since we’ve got this thing in victory lane, so it definitely feels really good to get the first win out of the way, at least with the house car anyway,” said Sheppard, who has three 2020 victories in his family-owned No. B5 but hadn’t won in Rocket's iconic blue No. 1 since last October. “It’s a relief for me for sure, because I was beginning to wonder what I was doing there for a while.

“I talked to my dad last night and he was just telling me, he was trying to keep me pumped up and keep my head up after last night, because I was down on myself. Not necessarily lost confidence, because my car’s really good night-in, night-out, and I’m putting myself in the right position, I just keep making mistakes. So luckily (I’m) just relieved tonight.”

Home-track standout Kyle Bronson of Brandon, Fla., Monday’s runner-up, started 11th and was trying to grab the third spot from Dohm exiting turn two when he smashed the backstretch wall and spun out contention. Bronson tried to squeeze between Dohm’s car and the wall but ran out of room.

It was Bronson who Sheppard tangled with on the backstretch in Monday’s opener, but there was no such drama for the Rocket team this time around. Sheppard led the first lap, lost the spot to Dohm on the second lap but went back ahead and kept all challengers at bay the rest of the way.

Overton took a stab at Sheppard in turn one just past the halfway point, but as the race’s lone groove settled to the bottom in the second half of the race, Sheppard stayed safely in control.

“There’s a lot of tough cars out here, and especially when I messed up that bad down there in that one corner, that I had to start doing something different,” Sheppard said. “I knew the top was going to be going away at some point, and I probably squeezed Brandon getting into (turn) one there. After last night, it was one of them deals where it was rubbering up on the bottom and we had to get down (into the low groove).”

Overton, who made a 19th-to-second charge in the Lucas Oil opener Saturday at Golden Isles Speedway near Brunswick, Ga., scored his second podium finish of the series season.

“What an awesome racetrack. I just got there a little too late, the (track) kind of cleaned up in the bottom there,” Overton said. “We had a really good race car again. Yesterday, I just made the wrong adjustments on everything, and kind of figured it out this evening in our heat race. We had a good race car.”

The runner-up would like to start a little closer to the front sooner than later.

“We just gotta quit burying ourselves early in the night,” he said. “It’s hard to start back there; you kind of use up your stuff before you get up there and get a chance to race. We’ll get it. We just keep plugging along, and like I said, just trying stuff different every day, and if we hit on something (that’s great) … we didn’t tear much up, had a good night and I can’t thank (enough) all these fans for coming to watch, and we sure appreciate ’em.”

McCreadie, who started outside the fifth row, was pleased with his car’s performance — and his positioning on restarts — during a spate of late cautions.

“We made some good changes on this Mega Plumbing ride. It was not as good as I’d like it to be, and we made it way better in the feature and we got to maneuver up through there,” said the Golden Isles winner. “I did get every restart on the bottom when it was rubbered, so that was my night of luck, so we’ll take it.

Besides Bronson’s caution, the 30-lap feature was slowed by five other yellow flags, most significantly when David Breazeale and Brian Shirley tangled in turn three as drivers were battling for low-groove position on lap 26.

The first caution appeared on the first attempted start when Johnny Scott spun in turn two while Chase Junghans got out of shape after hitting the backstretch wall. A lap-17 yellow appeared for a slowing G.R. Smith just in front of the leaders heading into turn three, and the final caution came on lap 19 when Jimmy Owens slowed with a flat, his second of the race.

Tyler Erb of New Waverly, Texas, who ran second laps 6-16, slowed with a flat tire on the 24th lap after slipping back.

Action continues Wednesday with the third round of the Wrisco Winternationals with a $7,000-to-win feature event on tap. Hot laps are scheduled for 5:30 p.m. with racing at 7:10.

Notes: Sheppard’s previous Lucas Oil Series victory was also the Rocket Chassis house car’s previous victory when he earned $100,000 at Portsmouth (Ohio) Raceway Park's Rhino Ag Dirt Track World Championship. … Monday’s winner Devin Moran of Dresden, Ohio, finished ninth. … Twenty-six of 30 starters finished on the lead lap. … Sixth-finishing Mike Marlar of Winfield, Tenn., jumped up to third on the 10th lap but slipped back a few spots in the second half of the race. … Track co-owner Al Varnadore spent about 45 minutes before the feature scraping the track surface to remove black buildup from the night’s prelims.

Tim Dohm will lead the 30-lap feature’s field to the green flag after his dramatic last-lap victory over Boom Briggs in the first heat. He will be gunning to replay his only previous Winternationals triumph in 2007. … Briggs mourned the final-circuit slip that dropped him the feature's pole position to a seventh-place starting spot. “I just got in (to turn one) too soft and pushed,” Briggs said, shaking his head in frustration. “This place is so technical. You don’t want to miss that bottom or you’re done.” … With the third-mile oval developing an increasingly distinct line of rubber throughout the qualifying races (lap times picked up nearly a second during the second consolation race, indicating the surface was locking down), teams across the pit area began contemplating bolting on the hard 40-compound rubber because “it’s going to be a tire game,” remarked Tyler Erb, a two-time 2019 Winternationals winner who starts fourth in the feature. But officials announced that the Al Varnadore track-prep crew will use the grader to “clip” the surface and also push out the inside marker tires after the Strawberry Dash in an effort to revitalize the conditions; the pre-feature work is expected to take about 45 minutes to an hour, pushing the estimated green flag for the 30-lapper to around 9:30 p.m. … Dan Stone’s Super Deuce car sustained a thoroughly mangled nosepiece in his heat when he clipped an inside marker tire while trying to avoid a tangle. His crew put on a brand-new nose in time to get him out for the first B-main. … Stormy Scott went spinning during the first consy after contact from Freddie Carpenter and was hit hard in his car’s front end by Joel Callahan; Carpenter was tagged with rough driving and restarted on the tail. … Provisional starters are Earl Pearson Jr. and Stormy Scott (Lucas Oil points), Brian Shirley (fast-timer) along with Chris Garnes, Tyler Bruening, G.R. Smith and Johnny Scott (Lucas Oil emergency).

In the first heat, Tim Dohm slipped under race-long leader and polesitter Boom Briggs to win the first heat and grab the pole for the main event. … The top three in the second heat (Jonathan Davenport, Billy Moyer and Dennis Erb Jr.) have 40 Winternationals victories among them and are the three winningest drivers entered in 2020. … Monday’s winner Devin Moran finished three seconds behind the top two finishers in the third heat, Hudson O’Neal and Kyle Bronson. … Fourth heat polesitter Chase Junghans struggled to a fourth-place finish. … Logan Roberson was in contention for a fourth-heat transfer spot when he had a lap-seven blowout in the turn-four cushion. … Brian Shirley led early in the fifth heat, but it appeared the front-left corner of his nosepiece was dragging, causing him to fade and eventually spin in turn two after contact from Jeff Mathews, who started ninth and finished third. … Tennessee buddies Mike Marlar and Jimmy Owens dueled throughout the sixth heat with Marlar hanging on to win while Josh Richards dropped Owens to third late.

The conditions on Florida’s Gulf Coast are wonderful again for Night 2 of the Wrisco Winternationals with temperatures reaching the upper 70s under partly sunny skies. … Fast qualifier Chase Junghans of Manhattan, Kan., earned his first career Georgia-Florida Speedweeks fast time. ... Tuesday’s field numbers 61, down one entry from the opener because Kerry King of Delmar, Del., is sitting out the evening’s action. … There are heavy hearts in the pit area — especially around the team of Brookville, Pa., racer Charles Powell — following Monday’s passing of Clearfield, Pa.‘s Frank Little, the father of Dirt Late Model racer Gary Little. The 71-year-old Little suffered an apparent massive heart attack shortly after the 30-lap feature while sitting on a four-wheeler behind Powell’s trailer; Little had traveled to Florida to offer assistance to Powell during the Winternationals. … During Tuesday’s drivers’ meeting, Lucas Oil Series director Rick Schwallie addressed criticism of Monday’s feature restarts leveled by Brandon Sheppard of New Berlin, Ill., who felt the two drivers behind him on a Delaware Double-File restart fanned out illegally as the green flag was displayed, putting him at a disadvantage. Schwallie asserted that the cars in the second row should remain “shoulder-to-shoulder” with at least one of their front tires remaining behind the leader coming to the restart green flag; they will face a penalty if they immediately spread across the track as the pacesetter fires. “The guy who’s leading the race has earned the right to be leading the race (and firing first on a restart),” Schwallie said. … Schwallie also apologized to competitors for failing to send Jonathan Davenport of Blairsville, Ga., to the rear of Monday’s feature lineup after he switched to a backup car. Davenport remained in his scheduled 22nd-place starting spot rather than dropping to the back of the 30-car field and went on to finish fourth. “We make mistakes ourselves,” Schwallie conceded. … Devin Moran of Dresden, Ohio, was certainly ecstatic after capturing his first-ever victory at East Bay with a stirring drive in Monday’s 30-lapper. His car owner, Tye Twarog of Coshocton, Ohio, was equally thrilled. “That was definitely an emotional win,” Twarog said. “I was actually sitting in the front grandstand watching, and as soon as he won I went down there (to victory lane) and I shook his hand and beat the roof. It was all fun. It was just a pretty amazing win … first Lucas win (of his career as a car owner). This one here’s special, because, you know, Speedweeks, Florida … it’s something I’ve been coming to since I was a kid. You dream of something like this.”

Lucas Oil Late Model Dirt Series drivers set a high bar for action at East Bay in Monday’s opening event as the tour heads into the second round of the six-race Winternationals.

Devin Moran of Dresden, Ohio — one of five leaders in Monday’s 30-lapper — led the final nine laps to take a victory over Kyle Bronson and Tyler Erb in a main event with choatic action that left some drivers with hurt feelings or hurt fenders.