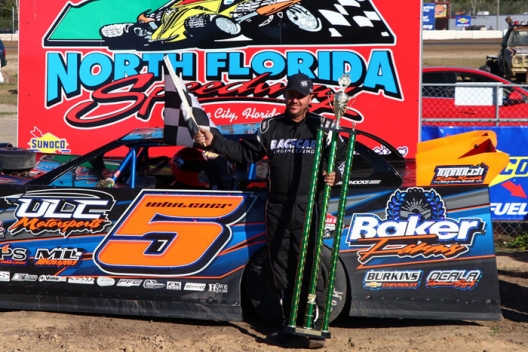 The added liquid on the 4/10-mile oval’s surface provided an extra challenge that Whitener was able to meet, while Moyer met his demise.

Inheriting the lead after Moyer spun on the fifth lap, the pole-starting Whitener led the rest of Sunday’s Winter Nationals feature for Super Late Models for a $5,000 payday. Whitener pulled away to nearly a full straightaway lead by halfway and cruised the rest of the way to duplicate his 2015 victory at North Florida.

“I went with a little harder tire,” the Middleburg, Fla., driver told announcer Rick Eshelman in victory lane. “I figured a (LM-30 Hoosier) would be better. They watered the track a little more than what I’d thought, but at the end of the race (the track surface) started bolting up and that 30 started working. I just had to calm down a little bit and we were able to make it work.”

Whitener took the checkers far ahead of Allen Weisser of Peoria, Ill., and sixth-starting Kyle Strickler of Mooresville, N.C. Dan Stone of Thompson, Pa., and Moyer rounded out the top five in the 10-car field.

Moyer, the Hall of Famer driver from Batesville, Ark., led the first four laps from outside the front row, but he got too high in turn one and slipped over the banking, handing the lead to Whitener. Moyer, who suffered damage to his rear bumper after hitting the wall, restarted on the tail and came back to fifth.

“You don’t really see Billy Moyer spin out too many times, so to see that, he just kind of got up a little bit (too high),” Whitener said. “I tried it one time (in turns one and two) and there wasn’t nothing there, but there was a little bit (of traction in turns three and four). I just went with a little harder tire. But all in all, it was just meant to be, it was just meant to be is all I can say.”

Moyer hated to see the extra water applied on the track with so few cars, comparing the watering of the daytime surface to watering concrete. “It don’t do much anyway,” he said.

“I was really concerned I was going to have to start on the outside. I thought I was going to (slide high) on the first lap, but I got a good start to where I could move down a little bit. And then I just kept inching my way up little by little, because you just need to enter a little wide here so you can exit in the better part of the racetrack on exit. I missed it by an inch, I guess.”

Moyer figured “that’s what sitting at home all winter does, I guess; (I’m) a little rusty,” he added. “We’re just working on some things, carwise. I think the thing was pretty good, they said I had a little bit of a lead there on (Whitener). … Anyway (we’ll) head East Bay, I guess, and do a little work and get myself ready.”

Weisser finished a solid second, but a softer tire choice cost him in the race’s late stages.

“The car was pretty good,” Weisser said. “I don’t think we really had the right tire on the right-rear. The car was really good at the beginning; it started fading there towards the end. Definitely a good first night for us and we’ll see what we can do down at East Bay.”

The third-finishing Strickler had been competing at North Florida in the modified division but decided to join a second division with his Late Model.

Besides the yellow flag for Moyer's spin, the race was slowed on the second lap when Homer Leonard, whose car hadn’t hit the track before the main event, smashed the turn-one wall and ended up with the car’s right side perched on the concrete. He wasn’t injured but the red flag was displayed to remove his car from the track.

Notes: Whitener has two career Georgia-Florida Speedweeks Super Late Model victories; his first came at North Florida five years ago. … Whitener ran second most of Saturday’s 50-lap Lucas Oil Late Model Dirt Series feature at Golden Isles Speedway near Brunswick, Ga., before running into problems in the final laps. … At North Florida, eight cars were running at the finish. … The car count was the fewest Super Late Models the track has had since reviving Super Late Models at the track for the Winter Nationals in 2013 (the highest car count was 20 in 2017). … DIRTcar series director Sam Driggers said his mother’s flower shop, Mary’s Florist, sponsored Jacksonville, Fla., driver Homer Leonard early in his career.

A modest field is set to compete at Lake City Speedway’s Winter Nationals with $5,000 going to the winner of a 25-lap main event.

Ten Late Models are signed in for the DIRTcar-sanctioned event with hot laps, time trials, a single heat race and feature event on the docket.