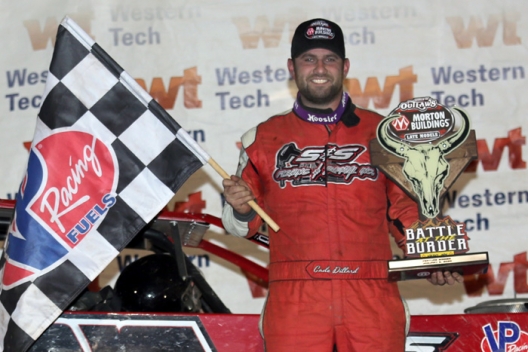 After capturing the 75-lap Battle at the Border finale for a $15,000 payday and his first-ever World of Outlaws Morton Buildings Late Model Series triumph, the 28-year-old driver from Robeline, La., was an emotional, moist-eyed mess when he emerged from his car in victory lane.

Dillard had won a big-money race before — last October at Vado, in fact, when he pocketed $20,101 for claiming the track’s open-wheel modified Fall Nationals — but this checkered flag was another magnitude entirely. He’s dreamed of winning a WoO A-main since his car owner, Shane Sprinkle of Midland, Texas, sent him on the road with the Outlaws in 2019 just one year after making his Dirt Late Model debut, and to finally do it at the WoO host track closest to Sprinkle’s home and by passing defending series champion Brandon Sheppard of New Berlin, Ill., in the race’s late stages simply blew his mind.

“Just to be out here with these guys in general is a blessing to me,” said Dillard, whose rookie WoO campaign saw him flash marked improvement during the season’s second half en route to a seventh-place finish in the points standings.

Dillard actually overtook a pair of former WoO champions for his breakthrough win, first slipping past Darrell Lanigan of Union, Ky., for second place shortly after a lap-48 restart and then doing the same to Sheppard on a lap-66 restart. He shocked Sheppard and the race’s observers with his surge past the race-long pacesetter to assume command and then mastered the 3/8-mile oval’s extreme outside lane over the remaining distance to become the second first-ever WoO winner in as many nights, joining Saturday victor (and Dillard’s fellow ’19 WoO rookie) Ricky Weiss of Headingley, Manitoba.

Sheppard, 26, couldn’t keep pace with Dillard’s MB Customs machine during the finals circuits and crossed the finish line 1.153 seconds behind the winner, leaving him to settle for his third runner-up finish in as many Battle at the Border features. He started from the outside pole and led laps 1-66 in Mark Richards’s Rocket Chassis house.

The 48-year-old Lanigan advanced from the fifth starting spot to reach second just nine laps into the feature and threatened Sheppard several times after the halfway point before losing the position to Dillard. He finished third in the Viper Motorsports-backed Barry Wright Race Cars house car.

Scott Bloomquist of Mooresburg, Tenn., marched forward from the 10th starting spot to place fourth in his self-built car while Weiss earned hard-charger honors with his 21st-to-fifth run in his Bloomquist Chassis just one night after bagging his long-awaited first career WoO victory.

Dillard, who started fourth, reached second for the first time with a lap-15 pass of Lanigan but ceded the spot back to Lanigan on lap 28. He then settled into a comfortable pace in to preserve his car for a stretch run.

“I lost a lot of these just for not being patient enough in the race, and probably the first 40 or so I just rode and tried not to hit the cushion unless I had to,” Dillard said. “I knew we were good when we could just run through the center of the track there at the beginning and not have to get up there and rely on the cushion.

“But that (lower line) went away,” he continued, “and I knew if we stood a shot at it we were just gonna have to get up there (on the cushion) and tear the deck out of it and whatever else it took.”

Dillard fell significantly behind Sheppard and Lanigan just after the race’s halfway mark before he began to jam harder on the gas.

“Brandon and Darrell got out there aways on me and I knew everything was gone but what was left up top, so I got up there and started running ‘em down,” Dillard remarked. “I said, ‘Well, you know, it’s gonna be hard to pass (with the top lane becoming the preferred spot), but we might have a shot.”

A lap-48 restart provided Dillard the opportunity to overtake Lanigan again for second. By lap 51 Dillard was beginning to duck underneath Sheppard in the corners, and on laps 61 and 62 he traded sliders with Sheppard at both ends of the track without officially leading a lap.

Sheppard proceeded to put a few car lengths on Dillard, who realized that forcing the issue and not completing a pass had hurt him. But the event’s fifth and final caution flag, on lap 66 when Frank Heckenast Jr. of Frankfort, Ill., slowed with front suspension damage while running eighth, gave him new life.

“I got to driving through the center there because I knew if I stood a chance at the time I was gonna have to get off the top to beat (Sheppard),” Dillard said. “We ran through the center for awhile and I think it just got the tires hot and then he started pulling away from me. That caution was just what I needed to get back going.”

With the field aligned in single-file formation because less than 10 laps remained in the race, Dillard was right behind Sheppard when the leader fired just after reaching turn three. Sheppard went to the top while Dillard dove low, pulled alongside Sheppard off the corner and slid ahead of the two-time WoO titlist in turn two.

When Sheppard was unable to cross over Dillard off the second corner, Dillard was in front for good.

“I didn’t really expect him to take off on the top like he did,” Dillard said of Sheppard’s restart. “I’d done it a couple restarts before and it worked, but I think it just got to the point there was no top left up there so it just took him a little longer to get going. I just got the left rear down in a little mud and was able to take off and get up beside him. I was far enough beside him to be able to slide him. Without that, it would’ve been hard to get up far enough beside to be able to pull a clean slider.”

Dillard certainly didn’t set his car on cruise control for the final nine laps, however.

“That’s definitely the hardest I ever ran,” Dillard said. “There were a couple times I messed my entry up and got into the wall there. I actually thought it was 70 laps, so when we got to lap 69 and we just kept going I was like, ‘Oh, man, I don’t know if I’ve got five left in me.’

“My crew guy told me I had a lead and I just kept running ‘er until about two to go and then I just played it a little more conservative.”

Sheppard tossed his car through the corners in the final laps but wasn’t able to mount a serious bid to regain command. He glumly settled for second place, well aware that he had let a golden opportunity to end the weekend with a victory slip through his fingers.

“All the stars lined up all weekend for us,” Sheppard said. “I just made a stupid decision that last restart. The restart before that I didn’t feel like I took off very good cutting across and leaving on the bottom, so my thought was, OK, if I take off on this bottom, Cade’s gonna wing the top and slide me getting into one, so I’m gonna wing the top and not let him get that run on me.

“Well, he did it anyway off the bottom. I didn’t know (traction was down low). On my restarts I didn’t feel like I had a ton of grip off the bottom there, but the top was slowing down so much too … like I said, it was just a stupid move on my part.

Sheppard thought he had staved off Dillard’s threat after surviving his challenger’s sliders on laps 61 and 62. The lap-66 caution flag, however, shook up his march to victory.

“I was running the top, but they (crewmen) kept telling me he was getting closer and closer and closer,” Sheppard said. “Finally Cade slid me, and I thought, OK, apparently I’m not turning the wick up near enough so I need to get going. So I did, and everything was going good and going my way. I had a great rhythm going on top. Everything was going great. Then I just made a bad move and screwed myself.

Sheppard gracefully accepted his defeat, though. He offered Dillard a congratulatory hug in victory lane.

“There’s no better guy to run second to,” said Sheppard, who ended the weekend leading the WoO points standings. “Cade, he’s been on tour beating up-and-down the road with us and he deserves to get one of these for sure.”

Lanigan, meanwhile, ended his weekend in New Mexico with a podium finish that continued his steady improvement. He finished 12th in Friday’s opener and fourth on Saturday night.

“The car’s pretty close right now,” Lanigan said of his BWRC Icon mount. “We’re getting it where I like it. I’m kind of happy for the rest of the year here.”

The race’s five caution flags were all for minor incidents: Jason Rauen of Farley, Iowa, slowing on lap three with body damage; Stormy Scott of Las Cruces, N.M., spinning in turn two  on lap nine; Chris Madden of Gray Court, S.C., stalling on the lap-nine restart while running fourth due to ignition trouble; Brent Larson of Lake Elmo, Minn., slowing on lap 48; and Heckenast falling off the pace on lap 66.

The race was red-flagged on lap 16 for a multi-car incident in turn one that saw fourth-place Billy Moyer Jr. of Batesville, Ark., slam the outside wall and collect Ashton Winger of Hampton, Ga. (fifth) and Bobby Pierce of Oakwood, Ill. (seventh), whose car came to rest perched on its right side while against Winger’s car. No injuries were reported — and despite damage sustained in the wreck, both Pierce and Winger continued racing and finished 10th and 18th, respectively.

Madden, who won Friday’s opener, was also able to continue after his lap-nine trouble and came from the rear of the field to finish eighth. He balky ignition refired after he briefly stopped on the track.