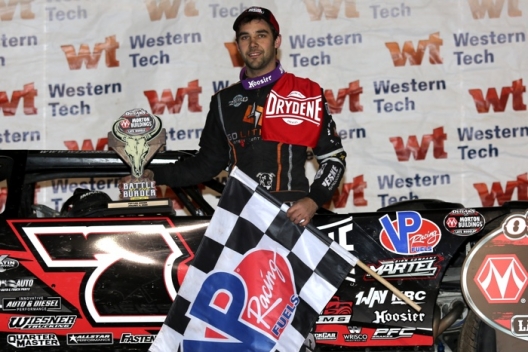 VADO, N.M. (Jan. 3) — Ricky Weiss has been hearing one question more than any other for months.

“When’s it coming? When’s it coming?” Weiss said, referring to inquiries directed toward him about his pursuit of an elusive World of Outlaws Morton Buildings Late Model Series victory.

At long last, with an impeccable drive on Saturday night at Vado Speedway Park, Weiss ended that talk once and for all. The 31-year-old driver from Headingley, Manitoba, overtook Chris Madden of Gary Court, S.C., for the lead on lap 14 and outran defending WoO champion Brandon Sheppard of New Berlin, Ill., down the stretch in the 30-lap Battle at the Border feature to capture his first-ever checkered flag on the national tour.

Weiss emerged as a WoO standout in 2019 while piling up podium finishes — including seven runner-up performances — en route to winning the circuit’s Rookie of the Year award and finishing an impressive third in the points standings. Victory eluded him, but he never showed any frustration with his fate.

In Weiss’s mind, his breakthrough was coming.

“We’ve been real good,” Weiss said after steering his family-owned Bloomquist Race Car to his coveted $5,000 triumph. “We were real good last year and we’ve just been tweaking and tweaking.”

After kicking off the 2020 WoO campaign with a third-place finish in Friday night’s Battle at the Border opener after briefly leading two circuits of the 30-lap feature, Weiss wasn’t to be denied on Saturday. He shot from the third starting spot to second on lap two, stalked Madden before assuming command with an inside move on the 14th lap and beat Sheppard to the finish line by 0.931 of a second.

Sheppard, 26, drew close to Weiss racing through lapped traffic shortly after overtaking Madden for second on lap 18, but the Rocket Chassis house car driver ceded several car lengths to the leader in the final laps as he settled for his second runner-up finish in as many nights.

Madden, who won Friday night’s 30-lapper, placed third in his Scott Bloomquist Racing machine after starting from the pole position and leading laps 2-13. The defeat snuffed out his shot at the $25,000 bonus posted for sweeping the weekend’s three features.

WoO regular Cade Dillard of Robeline, La., placed sixth after starting on the outside pole and nosing out Madden to lead the race’s first lap.

Weiss sensed that Saturday might finally be his day to bask in the WoO spotlight early in the feature. He was running second behind Madden and felt he had the car to move in front, prompting him to seize the moment rather than bide his time.

“Right before the caution (the race’s lone slowdown on lap nine for Brent Larson of Lake Elmo, Minn., slowing in turn two), I knew I could rotate the bottom a little bit better than (Madden),” Weiss said. “I seen Chris go down there a few times and kind of push up out of it, but I didn’t know if he was gonna be able to go down there (as the race continued). A lot of times I was running Sheppard down last year and all of a sudden he’d be able to move down and pull away, so there’s always that chance. I never want to be sitting behind the wheel and going, ‘I got ‘ya, I got ‘ya, I got ‘ya,’ and then all of a sudden they drive away.

“So I knew we needed to get down there, and then the caution come out and I knew the next challenge was to beat Sheppard (running third) into the (first) corner (on the restart). If we could do that I felt pretty good about our chances, and we were able to.”

Weiss shot by Madden to grab the lead for good on lap 14, but he soon had to deal with Sheppard. The Canadian experienced a scare on lap 23 when he slide high across the slick second corner while in lapped traffic, but he maintained command and negotiated the slower cars with aplomb to reach the checkered flag first.

“I could see signals, and (crew chief) Shawn (Gage) was saying to get down (on the track),” Weiss said.”But I also knew we had to clear those lapped cars before we had to get down. You never know when you’ve half cleared them if they’re gonna turn down or drive right into you, so I just trying to play it safe but be smart at the same time.

“Once we got by them and got down with about five or six to go I felt pretty comfortable, and then Shawn’s arms started spreading apart again (indicating a widening lead over Sheppard). With two to go (several lapped cars) were all there (in front of Weiss) and I was able to stick my nose under the one guy, but Shawn’s arms were far enough apart so I figured I’d just better not try to pass him. We’ve had too many heartbreakers where maybe coming out of four, if I’d have done that, he’d have maybe cut down and spun me out or something, so it was nice to know (he had a cushion) going into three.”

Weiss, who ended the night tied with Madden for the WoO points lead, appeared more relieved than overjoyed when he emerged from his car in victory lane. He immediately began looking toward Sunday’s 75-lap, $15,000-to-win Battle at the Border finale and the long WoO season to come.

“Now that we got that out of the way, maybe we can pick up the big one tomorrow,” said Weiss, who became the 49th driver — and first Canadian — to boast wins on both the WoO tour and Lucas Oil Late Model Dirt Series. “I think we’ve got a pretty good team this year. We’re building bigger and better.”

Sheppard, meanwhile, had to be satisfied with another near miss.

“We’ve had a really great race car,” said Sheppard, whose WoO winless streak reached a 10 races dating back to his last victory on Aug. 30, 2019, at Sharon Speedway in Hartford, Ohio. “We’ve been in the right spot, we just haven’t had things fall our way to where we could get to the lead.”

Sheppard noted that he’s seemingly stuck in a rut of bridesmaid performances.

“But staying up front, being consistent, that’s when the wins will come. We’re obviously consistent, and hopefully tomorrow maybe we can get one spot better.”

The 44-year-old Madden, meanwhile, ended the evening feeling good about his chances for capping the weekend with a flourish in Sunday’s 75-lapper.

“Tomorrow night’s the big picture for us,” Madden said.”We definitely threw some things at it tonight here for this 30-lap feature. We went through a stage there where we really wasn’t that good, and then toward the end right there we started making some momentum and some headway back. We definitely figured out some things, what to do and what not to do tomorrow night.”