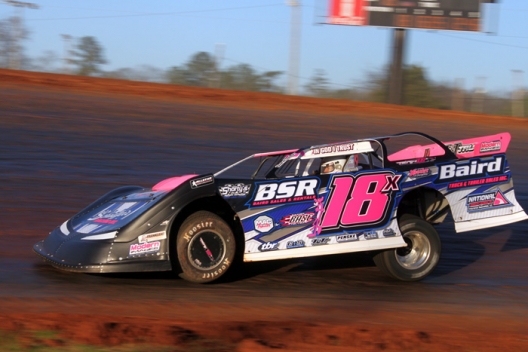 EASTABOGA, Ala. (Jan. 5) — Another Ice Bowl. Another dominating performance by Michael Page. Leading every lap from the pole, Page, of Douglasville, Ga., raced to an unprecedented fourth straight Ice Bowl victory Sunday afternoon at Talladega Short Track. He earned $6,000 for his convincing victory, finishing 2.762 seconds ahead of runner-up Jason Hiett of Oxford, Ala., who recorded his sixth top-five finish in nine Ice Bowl starts.

“I was expecting something to go wrong and it just didn’t. The whole time in the car, I was like, ‘I can’t do it.’ But it’s for my dad. He’s got cancer … ,” added an emotional Page, his voice trailing off ever so slightly.

Page managed to keep his composure through a lengthy race hampered by nine cautions and a brief red flag. He was never challenged after pulling ahead of Seawright on the opening lap. Page pointed toward Saturday’s prelims — when he was the second fastest in his group time trials before winning his heat — as the primary catalyst to victory.

“We were just kinda trying to be smart on tires and get a good qualifying (time). It’s all about qualifying,” Page said. “You know the heat race we had, we had the three fastest cars in the same heat (overall fast qualifier Jason Hiett, Page and Cory Hedgecock). I figured Jason was gonna get me on the start (of the heat) so I just tried something and it worked (up on) the very top (of the track). I knew if I didn’t mess up, I’d be alright.”

Five of the cautions came in the first nine laps, slowing the pace and keeping Page from reaching slower traffic. But after the final yellow waved on lap 32, he had an 18-lap run to the checkered flag, during which he did catch the tail of the field. By then, he’d stretched his lead to nearly a half straightaway and easily maintained it, despite following 11th-running Chris Jones of Alabaster, Ala. — the last driver on the lead lap — the rest of the way.

“Where they had my guys (spotting), you couldn’t see them,” said Page. “I just wanted to be there (close enough to pass) if the guy slipped up. If I could get one lapped car between us, it’s just like a buffer zone, you know. I’d feel way better. Then I could breath a little bit. I was just hoping to, and I think I did, get by one pretty quick.”

More than anything, Page said he just wanted to stay smooth and steady over the second half of the race, a task made easier he said thanks to an excellent handling Stinger Race Car.

“I was just trying not overshoot it (the turns),” he said. “One time I got into (the corner) a little hot and had to hit the brakes hard to not hit the lapped car and I got a little loose. If I’d done that a couple times, it’d been done. And the way the car felt, it felt like you was killing the right rear tire. So I didn’t know how much tire I had left and didn’t want to slide it, but it didn’t hurt no tires. I mean, it wore them, but you don’t know that though. The car was just awful good. I like to use my front end, and on a track like that it shows. I like to steer with my front end and it was good.”

Hiett, driving a new Capital Race Car backed by Josh Roberts, tried not to let the disappointment of yet another Ice Bowl near miss show. His runner-up finish was his second in the last three years. Hiett also finished third in both 2016 and ’17 and fourth in both 2012 and ’13, making him arguably the second-most consistent driver over the last handful of seasons, behind Page of course.

“Second’s not bad, but we’ve run (second) enough here at the Ice Bowl,” said Hiett, who started fifth. “We seem to keep coming up short. We were good, just on long runs we were better and we were fighting on restarts there trying to keep second. Anytime you finish the Ice Bowl second in this rubber racing and at least have all your sides on (the car), it’s a good night.

“With the track like it is, you’ve gotta have lapped traffic to help you or him to have some sort of trouble … just no where to go unless it’s on a restart or in lapped traffic. I kinda knew there with 15 or 20 (laps) to go we were just kinda riding. We struggled there on the first four or five laps on a restart. But after we’d get going I felt like we were actually as good, if not better, than they were.”

Craft managed to move forward thanks to some bold moves early, but said his car was a little snug in the corners late in the race.

“It was a rough race, but that’s rubber racing,” said Craft. “I was actually a little too tight. I think we went with a softer tire. I got tight there toward’s the end. I’d been better if we went a little harder (on tire compound).”

Notes: With Page’s flag-to-flag victory, there are now 14 Ice Bowls on record in which the winner paced all 50 laps. Page has accomplished the feat three times. After leading just 21 laps in 2019’s win, he’s led 171 of the last 200 circuits in Ice Bowl feature events. … Page’s four Ice Bowl wins have come in just six starts. … Page and Coldwater, Ala.’s Tim Roszell (’15) were the only former Ice Bowl winners entered in the event. … Roszell has the longest active participation streak with 12 consecutive Ice Bowl main event starts. He’s been in 15 of the last 16 feature events (he missed ’07) and has started 21 of 29 Ice Bowls. … While there were 11 drivers in this year’s race who also started the 2019 feature (Page, Roszell, Dallas Cooper, Andy Picklesimer, Josh Adkins, Jason Hiett, Scott Crigler, Dewayne Kiefer, Dillon Tidmore, Chris Jones and Cory Hedgecock), there were only five who have started the last three (Page, Hiett, Roszell, Cooper and Jones). Four of them (Page, Hiett, Roszell and Cooper) have each started the last five, with Roszell’s 12 consecutive starts leading Hiett’s nine straight. … Thirteen of the 24 starters finished the race, while 11 completed all 50 laps. … The race was red-flagged on lap nine following a chain reaction incident involving six cars. It wasn’t serious, though it did require the removal of Jason Welshan’s car from the top of the frontend of Cory Hedgecock’s machine. The two were caught with no where to go when Dallas Cooper spun on a restart. Hedgecock was the only driver to retire following the incident. Welshan soldiered on to a 10th-place finish. … Kyle Courtney of Knoxville, Tenn., took advantage of the long red flag on lap nine to make make repairs to his car. He returned to the track and finished 13th, one lap off the pace.

Michael Page of Douglasville, Ga., starts from the pole position in his quest of a fourth straight Ice Bowl victory. While four in a row would indeed be an unprecedented feat, in doing so Page would become the only driver with four wins in the annual January event. Last year he joined fellow Georgia Shane Clanton as the only two drivers with three Ice Bowl wins. … Dewayne Kiefer of St. Genevieve, Mo., overcame a disqualification during time trials to make the main event. Kiefer, who was DQ’d because he was light at the scales, finished fourth in the first consolation race. … Jason Hiett of Oxford, Ala., is piloting the No. 85 Robert’s Trucking ride. It’s a brand new Capital Race Car. … Dillon Tidmore bounced back from a flat tire in his heat to make the feature. Tidmore was slated to start on the front row of his heat on Saturday, but suffered a left rear flat and never completed a lap. “I couldn’t get back (to the pit area) and back to the track because of all the mud. We were too far away,” said Tidmore.

All four heat winners started on the front row of their respective heats. Both Chris Jones of Alabaster, Ala., and Michael Page of Douglasville, Ga., started from the second position, while Sam Seawright of Ft. Payne, Ala., and Dallas Cooper of Talladega, Ala., started from the pole. Jones, Page and Cooper led the entire 10-lap distance to win.

Seawright led only a single lap, however, as he needed a last-lap pass on race-long leader Scott Crigler of Alton, Mo., to pick up a victory in the third heat, which, with a margin of victory of only 0.163 of a second, was easily the closest race.

The final heat was a runaway as Cooper finished 4.837 seconds ahead of fourth-starting Luke Hoffner of Turbotville, Pa. Dillon Tidmore of Southside, Ala., was slated to start from outside of the front row in the fourth heat, but pulled off the track just before the race went green.

Seeking his first career Ice Bowl victory, Oxford, Ala.’s Jason Hiett got off to a good start on Saturday as he set the overall fast time among 35 entries for the 29th annual event at Talladega Short Track. Going out in the second group, Hiett was the only driver able to crack the sub-15-second threshold as he stopped the clock at 14.928 seconds. Hiett will start from the pole his heat alongside three-time and defending Ice Bowl winner Michael Page of Douglasville, Ga.