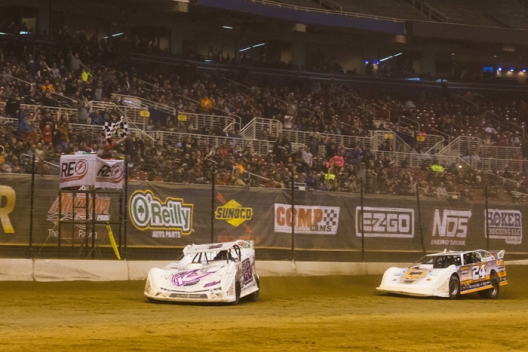 But that’s exactly where the 28-year-old driver found himself Friday night, whooping it up in front of thousands of fans in The Dome at America's Center after his $5,000 preliminary feature victory.

“I had no idea, man, I’d ever come here to a place like this or an event with all you people, for somebody like me to be in victory lane,” Carpenter told spectators from victory lane. “I did it!”

He did it the hard way, too, slipping back to third mid-race before making back-to-back passes on Illinois drivers Mike Spatola and race-long leader Ryan Unzicker in the final five laps en route to what wasn’t the richest, but clearly one of the most gratifying, of his pulled-up-by-the-bootstraps racing career.

“I shouldn’t be here and I’m here!” Carpenter bellow in victory lane amid the whoops and hollers of a genuine, from-the-heart interview about how far he’s come along with his dad and brother with Kryptonite Race Cars.

Carpenter’s victory puts him in prime position to chase Saturday’s $30,000-to-win finale at the Dome as he’s locked into a redraw for the top six starting spots for the 40-lapper along with Unzicker, Spatola and the top three finishers from the second preliminary — Shannon Babb, Rusty Schlenk and Patrik Daniel.

Carpenter, whose victories in 2019 including a $20,059 payday in Richmond, Ky., won Friday by a 0.467-second margin over Unzicker in the 20-lapper on the temporary fifth-mile oval on the Dome floor.

The vivacious Carpenter celebrated with a series of frontstretch donuts, climbed atop his car with a whoop and then feigned a heart attack by clutching his chest and briefly lying prostrate on his No. 28 car’s roof.

Carpenter started third and quickly grabbed second behind Unzicker before Spatola slipped past Carpenter on the ninth lap as the frontrunners faced a flurry of traffic.

Unzicker, who led 16 laps, stayed in control amid the slower cars Spatola, Carpenter and 10th-starting Tanner English hot on his heels.

Carpenter dove low into turn one to regain the second spot from Spatola on the 16th lap, then duplicated the move on Unzicker a lap later. Unzicker remained within striking distance but couldn’t find a way past the Kryptonite house car driver.

“I didn’t think I could win it. Like I said, man, I was driving that damn thing like I wasn’t going to live no more,” Carpenter said. “Because I knew if I didn’t go for it somebody else was going to.”

Unzicker’s struggles with traffic were too much to overcoming in the final laps.

“I was just biding my time working that top line, you know, and then I caught lapped traffic and caught that lapper with four to go, and it kind of held me up a little bit,” he said. “He was working a different line and I just opened the door — well, I pushed a little bit coming off of (turn) two — and it just opened the door for him to come up underneath me.

“You know, (Carpenter) did what he had to do. He got up underneath me and kind of put me in a wall a little bit, but he’s going for the win, and I don’t fault him for that. It’s a bummer. I really wanted to win and get it for my (crew) guys.”

The feature was slowed by a single lap-two caution when Scott James got out of shape exiting turn two, bottling up cars and ending up with a Matt Shipley-Jason Feger tangle. Feger retired and Rusty Griffaw also parked his car under caution when he lost fire. Ten drivers finished on the lead lap.

Action continues Saturday at the Dome with consolation races scheduled for 3 p.m. CST following by opening ceremonies prior to the weekend’s main events at 7 p.m. The always popular driver introductions are part of the pre-race festivities before the Late Model (40 laps), midget (30 laps) and modified (30 laps) main events.

Things didn’t go well for the front-row starters in the first heat with Scott Bloomquist’s car going up in smoke and Freddie Carpenter losing a driveshaft. … Trevor Gundaker spun in turn two in the second heat then got the worst of a frontstretch tangle with Scott Geaschel. … Geaschel was part of multiple cautions and hit the frontstretch wall on lap six. … Robert Ardry lost a left-rear wheel on the sixth lap of the third heat. … In the fourth heat, Brandon Tibaldi clipped Jason Zobrist in turn one, spinning both cars. … The fourth heat had a thrilling finish with a back-and-forth battle between Tyler Carpenter and Tanner English with Carpenter winning in a near photo-finish. … The last lap of the fifth heat was a wild one for transfer spots with Vance Wilson going from fourth to second on the backstretch. … Buddy Isles Jr. was running second in the sixth heat when he got into the turn-one wall and slowly rolled over; the accident caused a 25-minute delay for fence repairs. … Jason Feger was challenging for second in the final heat when his right-rear suspension gave up.

Gateway Dirt Nationals officials made a significant change in Friday’s schedule of events shortly before the planned start of Day 2 competition, moving all of the open-wheel modified action — hot laps, qualifying, heats, B-main and 20-lap feature for the 25 entries — to the end of the card. Modifieds will not hit the track until the Dirt Late Model and midget preliminary features are complete. … Bobby Pierce of Oakwood, Ill., who has won the past two Gateway Dirt Nationals finales, didn’t qualify to his satisfaction on Thursday (13th fastest in his group). But his full-fender results were much better than how he fared with his modified, which he rolled onto its roof during the preliminary feature after he hit the brakes entering turn one, stalled the engine and slid backwards into the outside wall. He wasn’t injured and has the modified’s relatively light damage repaired for Saturday’s show. … How did turning the second-fastest lap in Thursday Group B qualifying session leave Scott Ward of Hayit, S.D., feeling? “Nervous as hell,” the 50-year-old Ward said with a laugh while awaiting the start of Friday’s hot laps. “I didn’t sleep worth a s— last night. I would’ve rather went right into the heats last night than wait until today to race.” Ward starts the second heat from the pole position as he chases his first starting berth in Gateway’s Saturday-night finale. … As the start of Friday’s hot laps closed in, Rusty Schlenk of McClure, Ohio, and several members of his crew were seen diving under the hood of Schlenk’s Domination Race Car in search of a coolant leak that was discovered when they fired up the engine in the pits. … Before Friday’s hot laps, the car driven by Trevor Gundaker of St. Charles, Mo., who turned 17 on Thursday, sat in the pits with a tarp covering its front end. His crew chief, Robert Archambault, said the covering was an attempt to keep as much heat in the machine’s engine as possible following the short warmup period teams are permitted inside the building. The goal for teams is to maintain an optimum engine temperature of approximately 190 to 200 degrees.