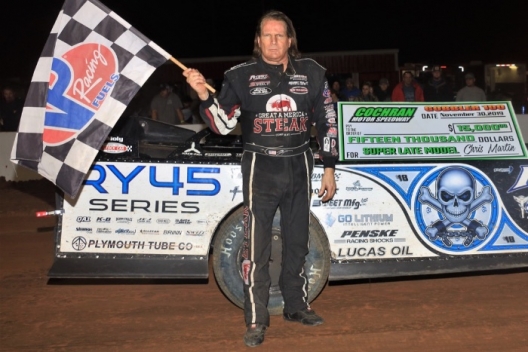 While lauding his team in victory lane following his ninth win since joining Scott Bloomquist Racing in July, Madden suggested that while at Cochran Motor Speedway for the Gobbler 100 perhaps Bloomquist “can pick up another win for us … and we’ll keep on rolling.”

It was a suggestion Bloomquist obviously took to heart as the Hall of Famer from Mooresburg, Tenn., indeed bagged another victory for the team.

Overtaking Dale McDowell of Chickamauga, Ga., on the 11th lap, Bloomquist paced the final 65 circuits to win Saturday’s 75-lap Gobbler 100 at the central Georgia oval. He earned a season-high $15,000 for his third victory of the year.

“This car, this RY45 (engine) by Custom Race Engines was really good, really strong,” Bloomquist sadid. “It just accelerated so hard and the Team Zero race car, it was spot on tonight. We got a bunch of new crew, bunch of new guys here helping us and I just want to thank them and all my other sponsors … Everybody that’s part of our program we just can’t thank them enough.”

Both Bloomquist and McDowell had a bounce-back night after mechanical issues doomed them on Friday. Bloomquist exited early due to a broken driveshaft, while McDowell gave up the lead with five laps remaining due to terminal engine failure. With repairs made, the pair combined to lead all but three laps of Saturday’s main event.

Dalton Cook of Smiths Station, Ala., led the first three laps after inheriting the pole from fast qualifier Jimmy Sharpe Jr. of Soperton, Ga., who hit a hole on his second lap of qualifying, got airborne and careened into a dirt embankment, damaging his car to the extent that he couldn’t start the feature. With each driver in the lineup bumped up a spot, Cook, who shared the front row with new Rum Runner Racing driver Pearson Lee Williams of Dublin, Ga., blasted into the lead with Williams in tow.

Cook’s lead was short-lived however, as he couldn’t hold off McDowell’s high-side charge. McDowell managed only a handful of laps at the front himself. A day after watching an almost certain victory go up in smoke, McDowell watched Bloomquist dart by on the inside as they raced down the backstretch.

“We were just a little tight,” McDowell said. “I got the lead there when I had some grip for the right front early. I got the lead and then I just got tighter and tighter, so I was just trying to crutch it. (Friday) night the car was a little bit tight, but a little bit different engine combination I think and I guess where we were running on the racetrack was a little different. So we’ll just make notes and try to come back. Shane’ll work on this thing and we’ll try to get her better.”

Fortunes turned for both Cook and McDowell on lap 12. Cook, who had slipped to fourth, clipped the car of Brian Connor, who was slowing to exit the track. The incident drew the race’s third caution, all but ending Cook’s chance at a career-high payday, while on the restart, Overton dropped McDowell, who just before the caution had pulled even with Bloomquist in traffic, to third.

Overton chased Bloomquist the rest of the way, occasionally closing the gap in traffic, while getting under the leader momentarily as they exited turn two on lap 31.

“We started pacing ourselves just a little bit and then decided we better get up on the wheel again,” said Bloomquist of Overton’s inside charge.

Overton recorded his best finish in four starts in the Hazard, Ky.-based Wells Motorsports Longhorn, improving one position from Friday’s outing. It was his third top-five since debuting with the team at Screven Motor Speedway in Sylvania, Ga., eight days earlier.

“I found some stuff earlier today that I had messed up and I didn’t really find it until after I qualified … my fault,” said Overton. “But the car was good. I just tightened it up way too much. I was way too loose (Friday) night and then I was way too tight tonight. I had to kinda bend it to get it in there. Congratulations to Scott.”

Notes: Bloomquist recorded his richest win of the season after missing significant time recovering from injuries suffered in a March motorcycle accident in March that required surgery and a lengthy rehabilitation. Still slow to exit the car and walking with a noticeable limp, Bloomquist said his recovery is still progressing slowly. “I didn’t realize I was numb from my hip all the way to my foot and that made it difficult to feel the throttle and really get a good feel for what was going on,” he said. “Now I’ve got a little numbness in the end of my foot and I can feel the rest of my leg and hip, which did bring some pain along with it. So, you know, we’re just pushing through this. I gotta get back in rehabilitation and really get after it hard.” … Bloomquist’s previous wins this season came at Batesville (Ark.) Motor Speedway in a $5,000 Topless 100 prelim and at Mansfield (Ohio) Motor Speedway in a $10,000 Dirt Million prelim. … Saturday’s race was slowed by eight cautions, five in the first 20 laps. The final yellow waved on lap 65, setting up a final 10-lap dash. … Ten cars finished the race, with nine completing all 75 circuits. … The feature didn’t get underway until after midnight. … Joseph Brown of Columbus, Ga., was slated to start 13th, but had mechanical trouble and started from the rear in a belonging to Jordy Nipper of Gray, Ga. … Last year’s Gobbler 100 winner Travis Pennington of Stapleton, Ga., didn't start the main event.